In an exclusive interview with AMERICAN FREE PRESS, Clint Lacy, the author of the book Blood in the Ozarks: Union War Crimes Against Southern Sympathizers and Civilians in Occupied Missouri, provides new details on a Christmas Day war crime that was carried out  Union soldiers during the Civil War and then covered up for over a century.

Sometimes events can innocently conspire to create significant results, as in the case of the book Blood in the Ozarks: Union War Crimes Against Southern Sympathizers and Civilians in Occupied Missouri. If not for a chance occurrence and some determination, the deaths of around 100 men, women, and children might have never come to light.

Author Clint Lacy sat down with AMERICAN FREE PRESS to discuss the genesis of his book and the importance of its subject matter, a heretofore obscure event that occurred nearly 153 years ago.

Lacy’s interest in this time period was spurred by a simple question.

You can listen to AFP’s exclusive interview with author Clint Lacy by clicking the listen button below:

“Before my grandmother passed,” Lacy began, “I asked her about our family history and she seemed to recall hearing a story of an uncle in Kentucky who went to go fight for the South. And after she passed I asked a great aunt of mine if she knew anything about that, and it turned out that ancestor was actually one of the 10 men captured with Jefferson Davis in Georgia at the end of the war.” 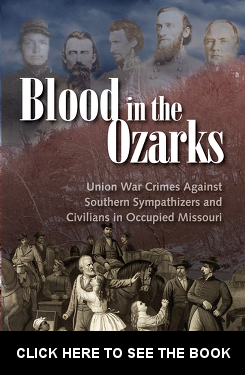 In 2005, Lacy gave a speech in Missouri at the site of a huge “Civil War” battle, “trying to tell the attendees, paint a picture for them of why these men fought and why these men would risk their lives in such a bloody, bloody charge.”

“One of the characters I mentioned in this speech was the Rev. Jesse Pratt,” Lacy explained.

In December 1863, Pratt, who was with the 15th Missouri Cavalry CSA, caught about 100 members of the Union’s Third Missouri State Militia Cavalry. Word passed to Union troops, who set out to rescue their comrades.

Lacy then brought up an obscure event known as the Wilson Massacre.

“Maj. James Wilson, commander of the 3rd Missouri Cavalry, found where the men had been taken,” explained Lacy, and they reached camp during a Christmas dinner.

“And the story goes that women, children, and the elderly as well as the soldiers were massacred in this event,” he said.

“This book became a bestseller,” he explained, “and the Wilson Massacre was no longer just a local legend after that. It became national news about a war crime that happened on Christmas

The author, Paulette Jiles, got a lot of her information for the book from a local author, Jerry Ponder, who had uncovered, by chance, some important documents.

“There used to be two libraries in Doniphan, Mo., a county library and city library,” said Lacy, “and they were consolidated in the early 1990s.

Jerry saw them throwing a lot of books and papers out into the dumpster, and he thought there

He was right. Two of the documents discussed the Wilson Massacre.

Lacy got in touch with Jerry, who was close to death, but still mailed out the documents.

“One of them has a Doniphan Public Library stamp right on the top of the paper,” he said.

Lacy began his book soon after that, and after nearly a decade of struggling, the rest is, well, accurate history.

AFP asked why this event that happened more than 150 years ago is so important today.

“Three reasons,” Lacy quickly answered. “First and foremost, the honor of a good man, Jerry Ponder, has been maligned and dragged through the mud by critics. Second, there’s an old saying that if you don’t know your history you’re doomed to repeat it. And third, these men who were massacred, and their families—these men were standing up for states rights against a government that overstepped its bounds. Who is to say that with the overreach of government today, people that stand up for states rights and the Constitution won’t be murdered today like they were back then?”

Be sure to check out Lacy’s article in the latest BARNES REVIEW where he writes about an important chapter of the Civil War, which Lacy refers to as “a war of Northern aggression or an illegal invasion.”