An international team of court scientists released a study earlier in August dismissing claims that so-called chemtrails from airplanes exist and are sickening people around the world. Activists and environmentalists have not lost heart, though, and are still moving ahead with lawsuits and legislation to expose this toxic global program.

Establishment scientists may be doing all they can to undermine legitimate research into so-called chemtrails—those toxic chemical trails left behind by airplanes high up in the atmosphere—but that has not taken the wind of out of activists’ sails. Citizens across America are still working to get to the bottom of what exactly has been filling our skies and allegedly making many people sick.

According to the mainstream media, an international team released a study pooh-poohing the theory that a secret large-scale atmospheric program, or SLAP, is in place intended to affect the health of humans and the environment.

AFP reported on this study on Aug. 19.

But there is some good news out there.

On Feb.12, 2015, the so-called Geoengineering Act of 2015 (H.B. 5480) was introduced into Rhode Island’s General Assembly, which “would demand public disclosure and health and environmental evaluations of any geoengineering activities.” As of May 2015, it was held for further study.

Under its “declaration of geoengineering policy,” it says: “The . . . assembly declares that while the use of geoengineering to address climate change and global warming is a topic worthy for both scientific and other public investigation and debate, its implementation and use should be strictly regulated . . . at this time. Such regulation must include the opportunity for input and comment from the general public, as well as from the medical, environmental, and scientific communities.”

The bill added, “Tests must be performed on a continuous basis to ascertain levels of proposed and known chemicals, particles, gases, metals, other compounds, and materials to ensure that these programs are not implemented without public consent.”

The state legislation died in committee last year, but there is hope that legislators will revisit the measure this year.

In addition, in early 2016, a mass-tort environmental class-action lawsuit was brought in the Federal Court of Canada “on behalf of all affected Canadians in respect of aerial discharges performed directly or indirectly by Her Majesty the Queen and/or her instrumentalities, in Canadian air space, and which aerial discharges are alleged to compromise cognitive function, contribute to other neurological disorders, damage property and the environment, among . . . other . . . damage,” Dr. J. Marvin Herndon, a geophysicist, informed AFP. 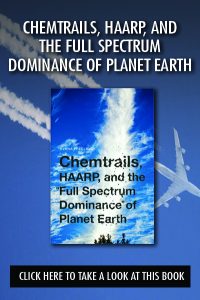 The noted website “Geoengineering Watch,” which watchdogs this issue, had urged Canadian attorneys to take up this issue and believes its efforts have paid off.