Whether or not you’re of the mind to believe that Edgar J. Steele is guilty or innocent of charges that he wanted to have his wife assassinated, there are some facts of his case that can shed light upon his arrest, indictment, trial, conviction and incarceration. A close look at his treatment by law enforcement should convince anyone that the authorities had it out for this man, and there is ample evidence to show this to be the case.

This writer had the privilege of conducting a series of audio interviews with Steele for this newspaper in May 2011, which have never been made public nor heard by anyone. They were conducted between May 18 and May 25, while the noted First Amendment attorney was housed at the Bonner County Detention Center in Sandpoint, Idaho.

Now you can own these never-before-heard recordings in a 3-CD set for only $25. 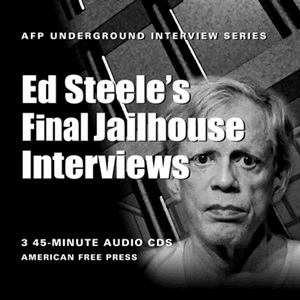 Over a nine-day span in May of 2011, AFP’s Dave Gahary conducted a series of prison telephone interviews with Edgar J. Steele, which took place a few weeks after his guilty verdict. Stored for years in the AFP tape vault, these never-before-heard recordings offer a rare peek into the man many of you have come to know, respect and admire. Ed recounts his mistreatment by his captors, the incongruence of the charges, his undying love for his wife, and a lot more.

LISTEN TO A SNIPPET FROM THE INTERVIEW HERE