Representatives Alice Costandina “Dina” Titus (D-Nev.) and David Wilson Jolly (R-Fla.) have cosponsored the Veteran Suicide Prevention Act (H.R. 4640) to study the connection be­tween veterans’ death by suicide and the use of psychiatric medication during the past five years.

Titus, a member of the House Committee on Veterans’ Affairs, wrote in a statement supporting the bill: “Data suggest that every 65 minutes a veteran takes his or her own life. This is unacceptable. One way to address the problem is to determine if any associations exist between suicide and medical treatments our veterans may be receiving for service-related conditions. Accordingly, this bill is a prudent first step in ending this crisis and letting our troops know that when they come home they are not alone.”

Kelly Patricia O’Meara, journalist and author of Psyched Out: How Psychiatry Sells Mental Illness and Pushes Pills that Kill, published a commentary online on April 7 that noted “22 veterans commit suicide every day and one in six American service members is on at least one psychiatric drug. The  VA’s [Veterans Administration] mental health budget has soared from less than $3 billion in 2007 to nearly $7 billion in 2014. From 2005 to 2011, the Department of Defense and the VA increased their prescriptions of psychiatric drugs by nearly 700%—that’s more than 30 times faster than the civilian rate. The VA found that 80% of veterans diagnosed with PTSD were given psychiatric drugs and, of these, 89% were treated with antidepressants.”

(1) the total number of veterans who died by suicide during the five-year period preceding the date of the enactment of this act;

(3) a comprehensive list of the medications prescribed to, and found in the systems of, such veterans at the time of their deaths, specifically listing any medications that carried a black box warning, were off-label, psychotropic, or carried warnings that included suicidal ideation;

(4) a summary of medical diagnoses by Department of Veterans Affairs physicians which led to the prescribing of the medications referred to in paragraph (3);

(5) the number of instances in which the veteran who died by suicide was concurrently on multiple medications prescribed by Department of Veterans Affairs physicians;

(6) the percentage of veterans who died by suicide who were not taking any medication prescribed by a Department of Veterans Affairs physician;

(7) the percentage of veterans referred to in paragraph (1) with combat experience or trauma (including, but not limited to military sexual trauma, traumatic brain injury, and post-traumatic stress);

(8) Veterans Health Administration facilities with markedly high prescription and suicide rates of patients being treated at those facilities;

(9) a description of Department of Veterans Affairs policies governing the prescribing of medications referred to in paragraph (3).

This writer encourages everyone to support the Veteran Suicide Prevention Act,  because, if followed honestly, the data would help establish specific links between psychiatric drug use and suicide.

The number of veterans with traumatic brain injury (TBI) is extremely high, with some saying as many as 250,000 since the year 2000, though the VA claims “only” 51,000 suffer from it. How TBI intersects with the use of psychiatric medications is itself worthy of study.

It’s equally important to figure out how America has gotten to the point where Congress must order the VA to review the medical history of veterans who committed suicide.

Perhaps Congress should slash to nil our global police force of more than 800 bases in hundreds of countries, many of which are concentrated in the Middle East. For decades, meaningful Americans wearing differing political labels—populists, libertarians, paleo-conservatives, and even many progressives—have lamented what has become of the American empire.

Since September 11, 2001, American troops have been deployed in Afghanistan, Iraq, and other countries with little end in sight.

George Washington’s “Farewell Address,” which cautioned against “a passionate attachment” to another nation, should be revisited.

And let us not forget the stirring words of Major General Smedley Butler in his War Is a Racket, where he said:

“I spent 33 years and four months in active military service and during that period I spent most of my time as a high class muscle man for big business, Wall Street, and the bankers. In short, I was a racketeer, a gangster for capitalism. . . . Looking back on it, I might have given Al Capone a few hints. The best he could do was to operate his racket in three districts. I operated on three continents.” 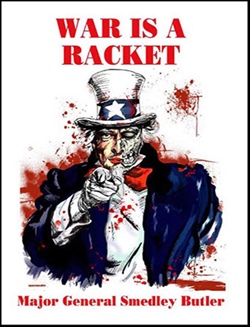 Some aver that the Project for the New American Century, a neoconservative think tank, was eerily insightful when in 2000, it urged massive military buildup, making the case that absent “some catastrophic and catalyzing event—like a new Pearl Harbor,” Americans wouldn’t likely see the need to have ground troops in the Middle East.

General Wesley Clark told reporter Amy Goodman on March 2, 2007 that merely 10 days after September 11, when he was in the Pentagon, he was told by a general who worked on the Joint Chiefs of Staff: “We’re going to war with Iraq. . . . We’re going to take out seven countries in five years, starting with Iraq, and then Syria, Lebanon, Libya, Somalia, Sudan and, finishing off, Iran.”

Whether neoconservatives took advantage of terrorism brought by blowback or participated in false-flag events, one thing is for certain: We don’t need a bag of new psychiatric medicines or other MKUltra-type behavior modification techniques to mold soldiers into virtual human robots. We need a non-interventionist foreign policy.