As AMERICAN FREE PRESS readers have learned, the Anti-Defamation League (ADL) has waged a particularly nasty vendetta against Paul Topete, frontman for the band PokerFace. During a July 10 interview, this writer asked Topete about his talent of getting beneath the ADL’s skin.

“It’s because I talk truth about the Jews,” he said. “That’s the bottom line: I’m just a guy in a rock n’ roll band that puts God and country first. I’m an American, and the ADL, with their bolshevik, Talmudic nightmare, is trying to eradicate everything that built this country up.”

“If you want to see a real dark nightmare, give up your guns. I’ve become even more outspoken since the Sandy Hook attempted gun grab. The bolsheviks have thrown down the gauntlet by declaring war on our Second Amendment. The last time Zionists took people’s weapons, millions were murdered. I’m trying to stop an American genocide, and I’ll sacrifice my life if that’s what it takes to free America. We can wake up from this nightmare.”

“They’re [the ADL] the most evil, insidious institution allowed to operate on American soil. The ADL acts as a PR group for the organized crime syndicate that’s running this country and the world. If you don’t go along with them, they’ll try to beat you into submission.”

Typical of their modus operandi, the ADL scared off speakers for Freedompalooza by dropping the “holocaust-denial” bomb.

LISTEN: LARRY PRATT, EXECUTIVE DIRECTOR OF GUN OWNERS OF AMERICA (GOA), ONE OF THE SPEAKERS AT FREEDOMPALOOZA WHO DROPPED OUT OF THE FESTIVAL, CONFRONTED BY A CALLER AT 1:18:02, ON A GOA RADIO SHOW

ALSO, AT 1:32:21 UNTIL 1:38:21, ANOTHER CALLER GIVES PRATT A LESSON IN JEWISH COMPLICITY IN SOME OF THE WORLD’S BIGGEST CRIMES

“I’m tired of seeing white men kneeling down to the Holocaustianity myth,” said Topete. “I’m openly calling out ADL Director Abe Foxman to a debate. But Foxman won’t debate me because they’ve told too many lies.”

“Did some Jews die in work camps during WWII? Yes, about 80,000. That’s called an inconvenience of war. But what about the millions of Christians killed in Russia, Ukraine and Eastern Europe? Today the ADL is overplaying their holocaust card. We’re David going up against Goliath to destroy their six million number. World War II was all about the death of Germany and the birth of Israel.”

“I put things into perspective very succinctly and bring people together,” laughed Topete. “But…the bolsheviks try to redefine our language and words and make them part of their agenda. That’s why it’s important to create our own media. Merlin Miller is a perfect example. He’s making a film and telling the truth about Israel’s attack on the USS Liberty.”

“I’m a threat to them because I have the ability to speak the common man’s language. The ADL’s been investigating me since 1995 when I attended my first LIBERTY LOBBY forum. That’s when the ADL put my name on their list. Plus, every community has their own little ADL organization so they can smear people in their hometown newspapers. That’s what they did to me. In 2005-2006 the ADL actively destroyed PokerFace gigs by scaring our promoters.”

“It validates everything I’ve ever said about them. If one little person can scare the crap out of the ADL, imagine what would happen if thousands of us stood up and spoke the truth.” 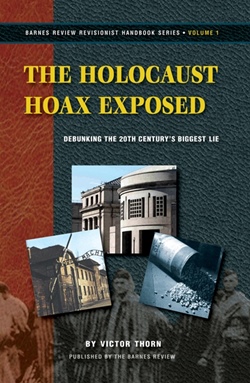 AND LEARN THE TRUTH ABOUT THE HOLOCAUST®

As behemoths of intimidation and hate with an annual operating budget of $55 million, the ADL is accustomed to pushing around their adversaries. But on April 28, 2000, William and Dorothy Quigley of Evergreen, Colorado won a $10.5 million settlement against the Mountain State’s chapter of the ADL. According to Chris Leppek of Intermountain Jewish News on May 12, 2000, “It is believed to be the largest defamation judgment ever awarded in a Colorado trial.” At the time, this lawsuit served as the first verdict ever leveled against the usually invincible ADL.

This case arose in 1994 following a minor dispute between the Quigleys and their neighbors, Mitchell and Candace Aronson. After this dust-up, as a form of revenge, the Aronsons illegally used a police scanner to eavesdrop and record the Quigleys as they spoke on their cordless telephone.

Such a practice stood in direct violation of federal wiretap laws that prohibit anyone from tapping into and/or making copies of phone conversations.

During the monitoring process, the Aronsons overheard the Quigleys making what they deemed to be anti-Semitic jokes and references. As a result, the Aronsons presented their criminally-obtained tapes to ADL Director Saul Rosenthal, who then proceeded to publicly smear the Quigleys in the media, including a local Denver radio talk show.

With their reputations impugned, the Quigleys sued Rosenthal and the ADL for defamation of character which caused them significant financial losses. As a filmmaker in Jewish-dominated Hollywood, Mr. Quigley suffered immensely from these attacks, being blackballed from many potentially-lucrative projects.

Jurors agreed, determining that during their trial, Rosenthal presented at least 40 statements that “were not substantially true.” Attorney Jay Horowitz stated that his client, Mr. Aronson, “has become a pariah in the business,” whereas Judge Edward Nottingham surmised that the ADL’s actions had a “catastrophic impact” on the producer’s career.

In short, they had been defamed by an organization allegedly dedicated to stopping defamation.

• Anti-American organization won’t tolerate any opinions but its own

Although claiming to be an organization that protects diversity, the Anti-Defamation League—which acts as a propaganda arm and intelligence conduit for Israel’s Mossad—ranks as one of the most intolerant and anti-free speech groups operating in America. On the heels of their campaign against Paul Topete’s Freedompalooza celebration of liberty, ADL henchmen recently set their sights on a campus newspaper that ran an ad questioning the “holocaust.” And at Harvard, the ADL attacked a Palestinian solidarity committee that posted mock eviction notices on the doors of freshmen students as a way of protesting Israeli apartheid.

“[We] reaffirm our longstanding position advocating the adoption of stricter controls governing the sale, possession and distribution of firearms and other dangerous weapons.”

In relation to gun control, the ADL promotes “access to mental health treatment for those who need it.” On the surface many would agree with this sentiment. But, if heavy-handed ADL power-mongers were given any clout, the “mentally ill” would include constitutionalists, patriots, tea party members and supporters of limited foreign policy intervention on Israel’s behalf.

The ADL has also taken an extreme interest in so-called anti-bullying legislation. Bullying typically refers to troublemakers in kindergartens all the way up to universities, who harass, irritate and pick on other students. This is natural, but the ADL would like “bullying” to include “hate speech.” Among other things, they would ban holocaust revisionism or any criticism of the Israeli government.

Working hand-in-hand with this approach is the ADL’s criticism of various U.S. religious leaders, who requested that Congress halt Israeli foreign aid due to that country’s dismal human rights violations against Palestinians.

A constant ADL target can be found in cyberspace, especially in regard to the holocaust. ADL head Abe Foxman & Co. welcome the establishment of Internet ‘hate task forces’ that monitor what they deem to be anti-Semitic or racist messaging online.

In recent months the ADL has unleashed its pit bulls on a group of survivalists in Idaho seeking to build a 3,000-acre liberty-driven community. The ADL’s displeasure with anyone they deem “extremists” extends to so-called white separatists and even music that celebrates European heritage, customs and traditions.

For an entity that ostensibly advocates inclusion, it’s apparent that this powerful Jewish lobby only embraces those who bow down to its will and never question any of the ADL’s own heinous agenda.

In the aftermath of a Sanford, Florida jury acquitting George Zimmerman in the justifiable self-defense shooting of juvenile delinquent Trayvon Martin, not a single mainstream media source analyzed the impetus of this artificially-manufactured racial skirmish.

Initially, Florida law enforcement officials and the district attorney’s office refused to press charges against Zimmerman due to lack of evidence. But then National Association for the Advancement of Colored People (NAACP) award-winning attorney Ben Crump initiated protest marches that eventually attracted high-profile race-pimps such as Jesse Jackson and Al Sharpton.

Although these disreputable figures assumed the public limelight, behind the scenes lurked the actual puppet-masters. In a June 12 article entitled “The Strange History of the Anti-Defamation League,” Jewish photojournalist Jeffrey Blankfort wrote:

“Jews have been heavily involved with the NAACP since its inception in 1909. They have also been the major source of its funding.”

Several motives can be cited for the ADL’s financing of these prominent black activist groups. First there has been a long-held goal by some Jewish individuals and organizations to undermine white influence by injecting racial strife and liberal guilt into various facets of society. The ADL uses the NAACP to cast blame on whites for the lack of cultural advancement by blacks, when in reality poverty and lack of education hamstring blacks in America, not organized bias.

The ADL also exerts economic leverage over black groups so that they won’t reveal one of the most guarded secrets in American history, namely, that several wealthy Jewish merchants in the United States played a key role in purchasing slaves from rich black slave traders in Africa before transporting and selling them in the Americas. For the record, only a small percentage of these slaves actually went to America. Most were shipped to the Caribbean and South America. The ADL can never allow the truth of this matter to become known, so their money buys silence among influential NAACP pawns that become quite wealthy within the black grievance industry.

However, Louis Farrakhan and the Nation of Islam have dared to publicize the substantial Jewish role in the slave trade.