Wesley Kanne Clark, Sr., a retired United States Army general and Democratic presidential candidate, has publicly called for “disloyal” and “radicalized Americans” to be placed in internment camps for the duration of the never-ending global war on terror.

Appearing on the cable news network show “MSNBC Live with Thomas Roberts” on July 17, 2015, just after the shootings at two separate military installations in Chattanooga, Tennessee, Clark explained (4:45) that during WWII “if someone supported Nazi Germany at the expense of the United States, we didn’t say that was freedom of speech, we put him in a camp; they were prisoners of war.” 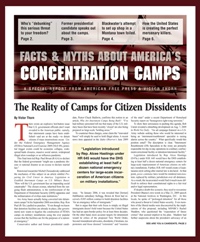 During WWII, many Japanese, German and Italian Americans were considered “enemy aliens” and were interned in various concentration camps for the duration of the war.

Additionally, as a result of the lobbying and behind-the-scenes maneuvering of the organized Jewish community, represented by organizations such as the Anti-Defamation League and the American Jewish Committee, numerous patriotic American citizens were indicted beginning in 1942 in what became known as the Great Sedition Trial of 1944. Many of those indicted were baselessly or falsely accused of conspiring with Adolf Hitler and National Socialist Germany to overthrow the U.S. government as well as demoralize and propagandize members of the American military.

Elizabeth Dilling, Lawrence Dennis, George Sylvester Viereck and William Dudley Pelley, to name only the most prominent individuals erroneously indicted, were some of the boldest, most uncompromising truth-tellers of that era, who unashamedly criticized FDR and his administration.

Clark, who now manages his own international consulting firm, seeks to revive these tyrannical policies, even though no war has been declared.

In the interview, Clark went on to advocate the necessity of internment camps in order to effectively conduct the so-called global war on terror, a paradigm of foreign policy concocted by Israeli military strategists and neoconservatives in the late 1970s, which has since become institutionalized in the West following the 9-11 attacks.

“If these people are radicalized and they don’t support the United States and they are disloyal to the United States as a matter of principle, fine,” Clark averred. “It’s their right, and it’s our right and obligation to segregate them from the normal community for the duration of the conflict.”

What Clark does not explain is how exactly the U.S. government and military can fairly, accurately and transparently identify and isolate “radicalized” or “disloyal” Americans. What exactly constitutes a radicalized or disloyal American? If the Great Sedition Trial is any indication, a radicalized or disloyal American is a citizen who criticizes policies pursued and enacted by the federal government of the United States, particularly as they relate to foreign policy.

In recent years, the political and media establishment have demonized and slandered critics of the federal government as “extremists” and “conspiracy theorists” in an effort to marginalize and discredit anyone who disagrees with various aspects of U.S. public policy, both domestically and internationally.

AMERICAN FREE PRESS reached out to Clark, asking him for an interview to clarify his remarks, but he refused to comment on them to us.

John Friend is a California-based writer who maintains a blog.

8 Comments on U.S. General Wants FEMA Camps for Enemies of the State