The minimum wage was enacted so that businesses could not collude in order to keep their workers under a living wage and fully dependent upon the employer. In the early 20th century, businesses weren’t even required to pay in American currency. Some western mining businesses, for example, paid in scrip that could only be redeemed at businesses the company owned. To paraphrase singer Tennessee Ernie Ford, “You sold your soul to the company store.” Advancements in labor relations have kept per-hour pay at arguably livable conditions for the American worker. The minimum wage now ranges from the federal minimum of $7.25 per hour in 21 states to $13.50 in the state of Washington. With the minimum wage continuing to rise, some are now opening the discussion to a relatively new concept in America, the maximum wage.

The maximum wage is exactly what it sounds like, a ceiling on pay, a limit to how much one can earn. Unlike a minimum wage, a maximum wage does not directly redistribute wealth. There is no mandated Robin Hood clause that robs the rich to give to the poor.

Cuba currently utilizes a maximum wage that limits workers to $20 U.S. per month. Of course, everything is relative to the prices of goods and services. Switzerland attempted to enact a maximum wage in 2013, but the initiative failed with only 34.7% approval.

In 2000, Jello Biafra ran for the nomination of the Green Party with the maximum wage as a key platform stance. Biafra’s idea was to cap American income at $100,000 per year and lower the income tax rate of everyone under $100,000 to zero. In this instance, a maximum wage meant a wage that can be earned without taxation. Above $100,000, the level of taxation would rapidly increase.

While the whole discussion is new to most Americans, Britain has been tangling with it a bit this year, as the government continues to struggle with ways to disperse a limited economy amongst its people. Think tanks throughout the UK have joined to call for a limit to corporate executive pay in exchange for a pay raise for lower-paid workers. The cap being discussed is around $250,000, which, according to the High Pay Center’s Luke Hildyard, is “enough to enable a lifestyle of absolute luxury compared to the vast majority of the population.” Doing so in Britain would allow the minimum wage to be raised around two dollars, which would then be around $10.75 in U.S. dollars.

For America’s economic history, this is also when the rise of the massive middle class occurred. Labor journalist and Institute for Policy Studies associate fellow Sam Pizzigati is the country’s best-known advocate of a maximum wage. He believes “that FDR income-capping spirit has re-emerged today in proposals to penalize companies that pay their top execs over 50 or 100 times what they pay their most typical workers.”

While it is certainly understandable that those who believe in capitalism believe in a no-limits growth of individual wealth, for over 99% of the population that is not a reality. That 99% does have to pay the bare minimum living expenses that continue to rise, and pay hasn’t kept up with the inflationary effects of prices. While the dream of unlimited wealth dominates American pop culture, it is largely a fantasy. It is beneficial to look at the reality of the day-to-day struggle with that in mind.

Patriotic Author Has Sound Plan to Stop Foreclosures on Farmers 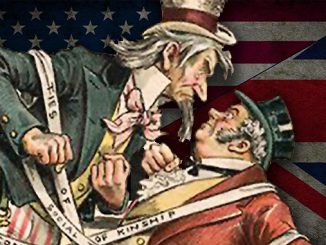 Are Yanks and Brits Going Their Separate Ways?