As the 2020 presidential election campaign heats up, already both Rep. Alexandria Ocasio-Cortez and Sen. Ted Cruz have been caught bending the campaign finance rules.

As the election season heats up the closer 2020 nears, politicians from both major American political parties have found creative, unethical, and even illegal means by which to fund their campaigns.

Sen. Ted Cruz (R-Texas) and Rep. Alexandria Ocasio-Cortez (D-N.Y.) have both recently made headlines due to campaign financing improprieties, any one of which could land them in serious legal troubles.

In February, Cruz’s campaign was fined $35,000 by the Federal Elections Commission (FEC) for improperly disclosing $1.1 million. The loans to his campaign came from megabanks Goldman Sachs and Citigroup. At the time the loans were made, Cruz’s wife, Heidi, worked for Goldman Sachs. Cruz called the improper disclosure an “inadvertent filing error.” It had come to light during the 2016 Republican primaries but stemmed from his 2012 Senate campaign.

In 2017, the Campaign Legal Center (CLC) filed a complaint with the FEC against the Cruz campaign. The decision to audit the Cruz financials was made unanimously, a rare unanimous act for the FEC board. The CLC describes its mission as “adamantly nonpartisan, holding candidates and government officials accountable regardless of political affiliation.”

CLC Senior Director Tara Malloy said that the fine was “an acknowledgment that Cruz’s campaign deprived voters of that critical information. In the homestretch of a high-profile election, voters were misled about Cruz’s personal and campaign finances. This is particularly harmful given that financial issues were at issue in the campaign and could have factored into voters’ decision-making at the ballot box.”

The two PACs paid the LLC nearly $1 million during the 2018 campaign. The LLC was paid just $19,000 for its services by the Ocasio-Cortez campaign. The PACs describe the LLC’s services as “strategic consulting” rather than fundraising. Experts have said that the violations for Ocasio- Cortez may not reside in the structure of the financing as much as they concern the lack of transparency in the specific expenditures of both the PACs and the LLC. Without knowing the specific tasks performed by the LLC, it is difficult for the FEC to properly categorize the campaign contributions.

The Ocasio-Cortez campaign is also defending itself from allegations being made by the conservative Coolidge-Reagan Foundation, which says that Ocasio-Cortez illegally paid her boyfriend, digital marketing consultant Riley Roberts, through the PACs and LLC. The campaign’s defenders and other campaign finance analysts have dismissed these allegations, as there appears to be no evidence that Roberts was either overpaid or did not do the work for which he was compensated.

The price of winning election to a national office has grown substantially in the post-Citizens United era. The cost of winning a Senate seat has grown to an average of $19.4 million, while House winners spend close to $2 million. The amount spent will vary dependent on size and location of district, the level of challenge, and the cost of advertising in a candidate’s major media markets.

Granted, the FEC guidelines are complex, and many new candidates—especially inexperienced challengers from small states with sparsely populated districts—have small staffs and may run afoul of campaign laws unintentionally. But that is what differentiates a civil violation from a criminal one.

Cruz released a statement saying the loans had been “inadvertently omitted” from earlier FEC filings. Ocasio-Cortez and Chakrabarti have both stated that they were aware of the regulations and that FEC rules were not violated. The FEC fined Cruz, while their decision on the Ocasio-Cortez violations is pending.

S.T. Patrick holds degrees in both journalism and social studies education. He spent 10 years as an educator and now hosts the “Midnight Writer News Show.” His email is [email protected] He is also an occasional contributor to TBR history magazine and the current managing editor of Deep Truth Journal (DTJ), a new conspiracy-focused publication being sold at the AFP Online Store. 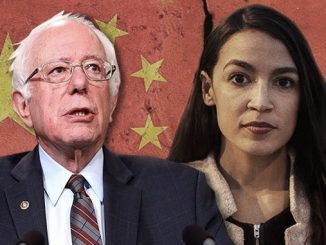 Bernie and the Rise of ‘She’ Guevara