The former managing director of drug giant Eli Lilly and Company in Sweden continues to reveal the business practices of the pharmaceutical industry, scoring a major victory in announcing that his first book, Side Effects: Death. Confessions of a Pharma-Insider, will be turned into a full-length feature film. In fact, he appeared in a September 16, 2014 segment of “The Daily Show.”

John Virapen, who began his career with “Big Pharma” in 1968 as a salesman knocking on doctors’ doors, rose through the ranks to realize what he was pitching were not drugs, but death. Virapen was well aware early on that thousands had died or committed suicide by taking the drugs he was pushing. “I indirectly contributed to the death of . . . people, whose shadows now haunt me,” he explained in his book. 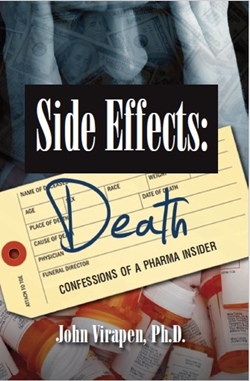 Dave Gahary had the opportunity to sit down with Mr. Virapen to discuss how he got into bed with Big Pharma, what motivated him to write this book, and what his long-term goals are, in this informative interview (15:36).