As is evidenced by the extreme popularity of political outsider Donald J. Trump’s presidential campaign, it should be painfully obvious to most Americans that those voted into office to serve our interests have a master other than “the people.”

But how do we, as nation, wrest our country back from these political elites and fulfill the vision of the genius founding fathers who set this nation on a course as no other? 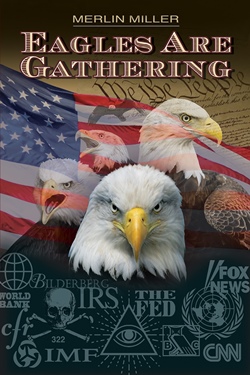 As is evidenced by the extreme popularity of political outsider Donald J. Trump’s presidential campaign, it should be painfully obvious to most Americans that those voted into office to serve our interests have a master other than “the people.”

But how do we, as nation, wrest our country back from these political elites and fulfill the vision of the genius founding fathers who set this nation on a course as no other?

Merlin L. Miller, the 63-year-old United States Military Academy at West Point graduate, Hollywood producer and director, and United States presidential candidate has a solution. And it’s all contained between the covers of his new book, Eagles are Gathering.

This writer conducted an exclusive interview with Merlin, and asked him how he came to write this book.

“I came from a very modest background in Iowa,” he began, “with simple grass-roots values. I was very fortunate to get a nomination to West Point, which opened up a world of opportunities for me, and I was just lucky to be the first member of our family to get to go on to college.”

“Walt Disney had been my idol,” Merlin explained, “so I wanted to pursue a career along the lines of him, and doing what I could to produce traditionally valued quality entertainment.”

He went to California in 1983, trained for two years at the University of Southern California, then interned at Paramount Studios, where he produced a few full-length feature independent films.

“I’ve produced several as an assistant director and assistant producer for low-budget guerrilla type films in Hollywood,” Merlin explained, “mostly action-adventure or horror films; great for experience, but not great films. But I finally left Hollywood after about 10 years and started my own independent efforts in mid-America, and those were great experiences. I produced and directed two features of my own which I was the creative force behind, so I feel like they’re really my projects.”

Then he met a survivor from the USS Liberty, which put his life on a different course.

“I met a survivor while marketing a Western motion picture called Jericho,” Merlin explained, “and he started telling me about the story of the USS Liberty, and I didn’t believe it. I never heard of it, and having been an Academy grad I thought that it was pretty bizarre sounding.”

Miller’s research confirmed the survivors account and he began his trip down the proverbial rabbit hole.

“The story of the Liberty actually began my journey down rabbit holes, and opened up an entire world of intrigues that didn’t make sense to me,” Merlin said, “but going down these rabbit holes and starting to connect things started to actually bring things together for me in a way which was quite disconcerting, but it really explained a lot of what was going on with our country.”

While researching the Liberty attack, Merlin uncovered things that would permanently alter his views about his country.

“I tried to figure out what happened this crew and how that was relevant to our history,” he explained, “and what has happened to our country since then: how our foreign policy has been hijacked, how the mainstream media has totally turned against our traditional values and the spirit of our country, and how our politicians no longer serve the interests of the people.”

“We can see it today with these wars and these occupations,” he continued, “which the people are firmly opposed to. Our borders are wide open to a massive immigration invasion while we supposedly are engaged in a ‘war on terror.’ A lot of things are just not making sense to people, like 9-11, which in my opinion was a clear false-flag attack similar to the Liberty attack, in that a force outside our own country initiated this to be able to pit peoples against each other. The Christian and the Muslim worlds are being pitted against each other, and it’s all divide and conquer.”

Then Miller addressed the fallout from the U.S.’s failed foreign policy we feel at home.

“Our rights are being eroded here in America, and our economy is on the verge [of collapse],” he stated. “Our politicians and business interests have gone overseas, and their multinational corporations have all the benefits now, while the American entrepreneurs and the American workers are being betrayed. It’s a designed implosion of our country, and in my opinion America’s being sacrificed as an empire to usher in a New World Order, and that certainly wasn’t the vision of our founding fathers, that wasn’t what made our republic a great country, and we’ve got to do what we can to stand up and fight that, and get back to our best traditions and get back to our Constitution.”

“Politics are being controlled today by a corrupt two-party system,” he said, “and our national defense, our foreign policy, no longer serves the best interests of the American people.”

AFP asked Merlin to summarize the premise of his book.

“Our country has just gone through a great deal of change in the last two or three decades,” he began, “and I think we’re in trouble now. This book was my journey down rabbit holes trying to connect a lot of these interconnecting intrigues in a way that would make sense for people who know things are wrong but don’t understand what and how we got where we are and who’s behind it. It’s very controversial, very comprehensive, but I think it’s going to be an eye-opener and very much needed.”

“There are 24 chapters and each one goes into areas which are, in their own right, very controversial,” Miller explained. “But they all come together, and they connect in a way which tells a story, and I think that people that go on this journey are going to be shocked by it, but it’s based on fact.”

Some of the book’s chapters will clearly resonate with readers of this newspaper, who have watched as this once great nation has decayed to the point it is almost unrecognizable from what it once was.

Chapters include: The American Dream, The USS Liberty, Zionism and Palestine, Conspiracies, PNAC and 9/11, Immigration and Race, Cultural Marxism vs. Walt Disney, Hollywood and Motion Pictures, The “Mainstream” Media, Who’s in Charge?, and Marked for Destruction?

“There’s a lot of personal anecdotes that I share with some of the experiences I had with West Point classmates of mine, people in Hollywood, and of course in the political arena as well,” Miller explained. “So, I think there are enough personal insights in this to make it a very unique book.”

Miller has done extensive traveling abroad to widen his world view, which adds valuable depth to the book.

“I’ve made some trips to Iran and to Russia to try to get truths that we certainly don’t get from our media,” Miller said. “And those trips were very insightful in trying to be able to gain their perspectives and how that is influencing the telling of this story.”

AFP asked what the main purpose of writing the book was.

“It’s really trying to wake people up, to realize that we have to be ‘eagles’ again, we have to take the goodness of our country back,” he answered. “Our country has been hijacked, and each of these chapters led sequentially to the telling of this story. It started with the American Dream, and what our country was all about, and going down the rabbit hole. The USS Liberty was a key moment in this story in my book, and that led us to try to figure out what’s going on with Zionism and Palestine. The book covers a lot of these key moments in history and tries to put it back into perspective.”

There is a deeper purpose to the book, as Merlin explained.

“This book tries to show people how we have the drastic need to come up with alternative parties, alternative media, so that the people realize that they do have a choice,” he said. “We can get active again, we can take our country back, and we must, if we’re gonna have a future for our kids.”

AFP asked if the only choice we have is to work within the political party system.

“But whether it’s working within the current corrupt political system or seeking alternatives to that,” he continued, “spreading the word through media is very important, and I think that shows like yours and the AMERICAN FREE PRESS newspaper, those are truthful alternatives to the lies and distortions that we’re getting from our mainstream media. And it’s the same with entertainment. Entertainment is shocking and degrading to us as people now, and they’re taking us on journeys that are unethical journeys, they’re trying to corrupt our values, our belief systems.”

AFP asked why someone should spend $20 to pick up the book.

“I think this book is gonna makes sense from a rational, nationalist perspective of what has happened to our country, and what is really going on behind the scenes,” he said. “These things simply don’t make sense to us when you study them, and people I think are coming to that conclusion, in overwhelming numbers now; they no longer trust our politicians, they certainly don’t trust the mainstream media.”

AFP asked what makes this book different from others.

“This book is very unique because I do have a lot of first-hand experiences that are reflected in this book,” Miller explained. “It’s not just somebody doing some research and writing about it, I’ve lived the world of motion pictures in Hollywood, I’ve lived in the military, I know some of the key players right now in politics and in military, and I can cite from personal examples and that adds credibility to the stories that people might otherwise hear, and they aren’t just conspiracies.”

“We just need to keep shaking the bushes so the American people arise from their stupor and started to do something to get our country back,” Merlin concluded.

Merlin welcomes any and all comments through his website, MerlinMiller.com.

5 Comments on AUDIO INTERVIEW & ARTICLE: New Book Offers Clues on How to Get Our Country Back