On the three-year anniversary of the April 15, 2013 Boston Marathon bombing, Dr. Jim Fetzer’s book, And Nobody Died In Boston, Either: State-Sponsored Terrorism with Hollywood Special Effects, makes the case that this was another elaborate charade to instill fear into the American people.

This is the latest book in a series designed to expose the growing U.S. police-security-intelligence state, and was released on the heels of the blockbuster book banned by Amazon.com, Nobody Died at Sandy Hook: It Was a FEMA Drill to Promote Gun Control.

Dave Gahary sat down with Jim to discuss his new book in this informative interview (8:30). 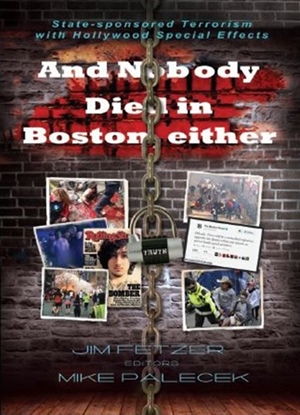 • Dr. James Fetzer and bevy of contributors voice their opinion on third anniversary of attack.

As the three-year anniversary of the April 15, 2013 Boston Marathon bombing approaches, Dr. Jim Fetzer’s book, And Nobody Died In Boston, Either: State-Sponsored Terrorism with Hollywood Special Effects, makes the case that this was another elaborate charade to instill fear into the American people. This is the latest book in a series designed to expose the growing U.S. police-security-intelligence state, and was released on the heels of the blockbuster book banned by Amazon.com, Nobody Died at Sandy Hook: It Was a FEMA Drill to Promote Gun Control.

After reading And Nobody Died In Boston, Either, the objective of the operation seems clear: to undermine the Posse Comitatus Act and the Fourth Amendment to the United States Constitution.

The Posse Comitatus Act is an 1878 U.S. federal law intended “to limit the powers of the federal government in using federal military personnel to enforce domestic policies within the United States.”

The right of the people to be secure in their persons, houses, papers, and effects, against unreasonable searches and seizures, shall not be violated, and no Warrants shall issue, but upon probable cause, supported by Oath or affirmation, and particularly describing the place to be searched, and the persons or things to be seized.

Thousands of law enforcement personnel searched a 20-block area of Watertown, Mass., where residents were forced from their homes without warrants or probable cause in pursuit of 19-year-old college student Dzhokhar Tsarnaev, the Boston Marathon bombing patsy.

Fetzer’s premise that this was an elaborate hoax is corroborated by a dozen contributors, including six current or retired Ph.D. college professors and three J.D.s, including John W. Whitehead, author of two books carried by AFP’s book and video store—A Government of Wolves: The Emerging American Police State and Battlefield America: The War on the American People—and Paul Craig Roberts, a regular contributor to this newspaper and prolific book author.

According to Fetzer, among the most decisive evidence that this was an operation is the fact that the backpacks ostensibly containing the bombs are different. The backpacks that carried the bombs were black nylon, but neither brother was wearing one, as anyone with a TV or computer can see. Fetzer contends that this means the government’s own evidence contradicts its stated position, which exposes a profound fraud.

Fetzer adds that he has proof that the Boston police on bullhorns were calling out, “This is a drill! This is a drill!” The Boston Globe “tweeted” that a demonstration bomb would be set off during the marathon “for the benefit of bomb squad activities.” Authorities knew from the beginning that this was a drill and not a terrorist act, he argues in the book.

Peering through the smoke, adds Fetzer, you can see bodies missing arms and legs but no blood, which means they did not just lose them.

In the book, Fetzer quotes Lorraine Day, M.D., chief of trauma surgery for San Francisco General Hospital for 25 years, who observes that this would be a physiological impossibility if the event had been real.

Fetzer contends that the blood in the streets shows up later, and that it’s fake blood that he says came from tubes. Even the smoke, he says, had been produced by a studio-quality smoke machine. To make his case, Fetzer has even placed a photograph of it published on the book’s back cover.

Nathan Folks, a Hollywood producer interviewed on RT, identified one of the key players as an actor he had cast in one of his own films. Folks was the first to suggest that the smoke had come from a smoke machine

Fetzer believes that the actual perpetrators of the bombing were personnel from the mercenary firm Craft International. These people were present in abundance on the scene that day, wearing khaki trousers and dark jackets with baseball caps, which bore a skull insignia. Craft, now conveniently defunct—whose motto was “Violence
does solve problems”—had employees wearing black nylon backpacks to the scene and then rushing away without them.

Dzhokhar was apprehended in a small boat in a Watertown driveway, where prosecutors claimed he composed a “confession” in blood on the curved surface of the inside of the vessel. Fetzer writes that the penmanship is perfectly straight and uniformly spaced, which, he believes, makes this one more obvious fraud.

Another of the absurdities addressed by Fetzer is that Dzhokhar was alleged to have killed his older brother, Tamerlan, but the timeline shows that Tamerlan was arrested by police, stripped naked, and placed in a police car before his death. How could Dzhokhar have killed him once he had been arrested?

The book weighs in at 440 pages with 350 photographs, and it has not yet been banned by Amazon, perhaps only because it hasn’t attracted enough notice. Anyone interested in reading more about the Boston Marathon bombing should buy this book if only to see if we can get it banned, which is the most obvious sign that the editor, Dr. James H. Fetzer, may be on the right track.