Now, Mark Anderson’s at “the scene of the crime,” as Jim was fond of saying, near Innsbruck, Austria. Mark discusses his third day in the field covering Bilderberg, which began yesterday, June 11, and runs through Sunday, June 14.

Dave Gahary spoke with Mark from his hotel room in Telfs, Austria, for this fourth update interview (8:08).

TELFS-BUCHEN, AUSTRIA—They try mightily to shun publicity’s cruel light, but several Bilderberg 2015 attendees could not avoid the cameras of We Are Change Switzerland. Photographer Thomas Gasser and his associates worked with this writer on the photo strategy June 10—which led to a barrage of June 11 photos at Innsbruck Airport of confirmed Bilderberg attendees, including but not limited to: 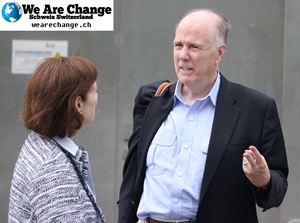 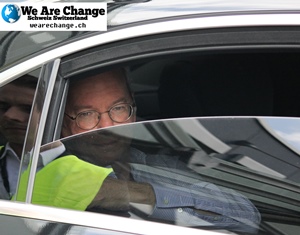 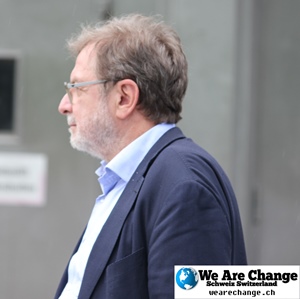 Meanwhile, AMERICAN FREE PRESS has learned that the European mainstream media is not “dropping the ball” on Bilderberg coverage as much as first feared.

A news team for Puls 4, a television station in Austria, told this AFP writer on the late afternoon of June 11, the first day of the four-day Bilderberg meeting, that three private television news outlets and one state-owned TV station, all Austrian-based, are covering Bilderberg.

Asked if any United States media, such as CNN or any other recognizable outlet, had sent a crew to Austria to cover Bilderberg, they seemed sure that no American media are present—at least so far.

All of this is in addition to area radio stations that have been reporting on Bilderberg fairly steadily.

And at least two Austrian daily mainstream newspapers have covered Bilderberg, as mentioned in a previous AFP dispatch on this year’s conference.

“We’ve even seen Turkish media,” a woman from Puls 4 also told AFP. Dutch media are reportedly on hand as well, even while several historians gathered with a Belgian filmmaker at Hotel Munde in Telfs, to conduct a workshop and plan a Bilderberg documentary that’s apparently in its early stages.

So, as the second day of Bilderberg 2015 came about on the morning of Friday, June 12, AFP appeared to be the only established national American newspaper on hand to cover this ultra-exclusive, collusive networking and planning session of some of the top guns in the corporate world, think tanks, academia, government, big commercial and central banks, the military—including new North Atlantic Treaty Organization Secretary General Jens Stoltenberg—European royalty and other “entitleds” and “notables” numbering only 140 from some 22 countries.

Furthermore, the Hotel Interalpen, where this year’s conference is happening, is not only apparently the most remote and most difficult-to-access of all the places Bilderberg has met in its 61 years—there also are reports of alternative reporters being harassed by Austrian police.

Notably, American and European media activists, such as Luke Rudkowski of the U.S., all continue to make valuable contributions in tracking and reporting on Bilderberg. Furthermore, initial reports of up to 1,000 protestors planning to converge on Telfs Sunday now include claims that the protest might start Saturday and possibly carry over into Sunday.

Also stay tuned for more Bilderberg 2015 dispatches, including more on Bilderberg’s “discussion” topics and what they mean, as well as more podcasts.

If any readers come across U.S. media coverage of Bilderberg, feel free to contact AFP directly or email this writer below.

AFP Roving Editor Mark Anderson is a veteran reporter who covers the annual Bilderberg meetings and is chairman of AFP’s new America First Action Committee, designed to involve AFP readers in focusing intensely on Congress to enact key changes, including monetary reform and a pullback of the warfare state. He and his wife Angie often work together on news projects.