Do you like a good real-life mystery? If so, the story of the Voynich manuscript, documented in the book The Voynich Manuscript: The Mysterious Code That Has Defied Interpretation for Centuries, is a twisting maze.

This mysterious manuscript was discovered in 1912 by rare book dealer Wilfrid M. Voynich in a wooden chest at an Italian Jesuit college. To this day, no one knows who the author is, who drew the lavish illustrations or much else about it.

Ever since it was found, the Voynich manuscript has perplexed researchers and scholars. The pages, made of calfskin or vellum, have been carbon dated to the 1400s. Written in an unknown language, the heavily illustrated manuscript was worked on by top code-crackers during World War II. They failed. It’s never been deciphered. At least that is the consensus of opinion. Some Voynichologists believe they have achieved a partial decoding of the document, though. 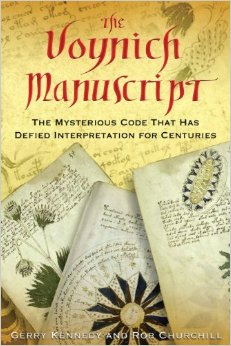 One section of the book is devoted to botany. Botanist Dr. Arthur Tucker of Delaware State University says he has identified one of the plants as “most certainly” Ipomoea arborescens, a Mexican desert tree that is a relative of the morning glory. Tucker believes the language—Voynichese, if you will—is a form of the Aztec language Nahuatl.

However, some Voynichologists believe Tucker is barking up the wrong tree. A more popular notion is that the Voynich manuscript is connected somehow with Roger Bacon, who flourished in the 13th century, though that is hard to reconcile with the carbon dating of the vellum.

Linguists, who have studied the Voynich manuscript, have determined it is written, like English, from left to right and top to bottom, and that it appears to be a real language, not some random string of nonsense.

Say Gerry Kennedy and Rob Churchill, in their book The Voynich Manuscript: “Many researchers over the years have believed, in all good faith, that they have discovered either a decipherment of the Voynichese language or the real meaning of the strange illustrations. Many more such theories will inevitably be presented in years to come by scholars equally convinced of the correctness of their methodology and conclusions.”