But here is Pat Shannan to set the record straight in a new blockbuster book of conspiracy fact . . .

THE UNCENSORED STORY OF THE TWO OSWALDS

The barrage of disinformation has begun. In recent weeks, CNN has aired separate one-hour presentations of half-truths portraying the innocence of federal agents at Waco and Oklahoma City, while further demonizing David Koresh and Tim McVeigh. The History Channel continues the 9-11 myth.

Beginning soon and coming to a TV near you will be the furthering of the propaganda surrounding the 50th anniversary of the assassination of President John F. Kennedy. At least two movies are being produced—one for TV starring Rob Lowe as JFK and another made for the theaters with Tom Hanks in the starring role. Both will perpetuate the 50-year-old lie that a Marxist-leaning loner named Lee Harvey Oswald shot the President from a Dallas warehouse.

The John F. Kennedy assassination and the people’s deception over the past half-century is the classic example of disinformation, as it was probably the most efficiently performed coup d’etat and cover-up in world history.

At around 11:30 a.m. on November 22, 1963, Julia Ann Mercer was stalled momentarily in traffic at Dealey Plaza and saw a man emerge from a car carrying a rifle case in front of the grassy knoll, just 50 yards west of the Texas School Book Depository (TSBD). It was driven by a man that she later IDed as Jack Ruby, after his picture was plastered on TV to the world two days later.

On November 20 and 22, while “Lee Harvey Oswald” was working at the TSBD, he was IDed by multiple witnesses at the Dobbs House Restaurant, the Top Ten Record Store in Oak Cliff and the Jiffy Store on Industrial Boulevard. He was also positively IDed as being seated with Jack Ruby after midnight, some 10 hours after he was jailed on November 22.

Moments after Officer J.D. Tippitt was shot dead, detectives conveniently found a wallet containing the ID cards of both Lee Harvey Oswald and Alek Hidell.  Also found on the street were five ejected .38 caliber shell casings. When Harvey was arrested in the Texas Theater some 40 minutes later, he was carrying a .38 revolver which, of course, does not eject its shells. Astonishing to detectives, Harvey was also carrying in his wallet at the same time the exact two ID cards.

This is just the tip of the iceberg in the case of the “two Oswalds.”

Inside The JFK Assassination and the Uncensored Story of the Two Oswalds you will see for yourself the mountain of forensics and photographic evidence proving that there were two Oswalds, the truth of which leads us to even more attempted cover-ups. 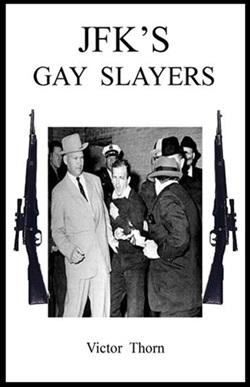 Recently, while reading an article about the JFK assassination, a particular quote leapt out at me. The source – Rose Cheramie, a stripper in the employ of Jack Ruby (Rubinstein) – exclaimed after reading a headline about her boss and his possible relationship to Lee Harvey Oswald, “Them two queer sons-of-a-bitches, they’ve been shacking up for years.”

Ms. Cheramie uttered these words only days after Ruby had shot and killed Oswald with a .38 revolver in the basement of Dallas police headquarters. Major networks broadcast this harrowing event live to millions of viewers.

At any rate, I’d previously heard these gay rumors, but had never investigated them any further. After all, wasn’t every conceivable angle of JFK’s murder already addressed in hundreds of books and documentaries? Depending on which author you read, either the CIA killed the president, or else it was Israel, Texas oilmen, bankers, Cubans and/or Fidel Castro, the Russians, Mafia mobsters, the military-industrial complex,  Lyndon Johnson, Freemasons, or Vatican assassins. There are even some that claim George Bush, Sr. played a pivotal role, or that Kennedy was eliminated because he tried to open top-secret UFO files.

But no book has been entirely devoted to the predominance of gays and/or bisexuals in what is still, to this day, one of the greatest conspiracies of all-time. Of course, various journalists have penned articles on this subject, but none of them expanded their scope to an all-encompassing level. Therefore, this publication will examine one of the most under-reported aspects of the November 22, 1963 slaying that, quite literally, changed the world and forever altered America’s innocence.

Get both The JFK Assassination and the Uncensored Story of the Two Oswalds and JFK’s Gay Slayers for only $25, save $5!