Phillip F. Tourney, the author of WHAT I SAW THAT DAY: Israel’s June 8, 1967 Holocaust of U.S. Servicemen Aboard the USS Liberty and its Aftermath, sat down with Dave Gahary to discuss his recollections, views and wishes, on this 46th anniversary of the Liberty massacre, in this eye-opening interview (1:36:41). 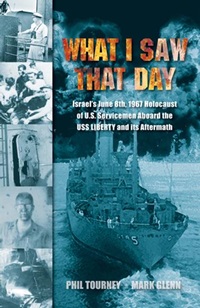 As another anniversary of the high-seas massacre of United States sailors and civilians by Israel’s armed forces approaches, one USS Liberty survivor refuses to back down and sees it as his life’s work educating people about what happened that fateful day of June 8, 1967.

Phillip F. Tourney, the author of WHAT I SAW THAT DAY: Israel’s June 8, 1967 Holocaust of U.S. Servicemen Aboard the USS Liberty and its Aftermath, sat down with AMERICAN FREE PRESS for an exclusive interview to discuss his recollections, views and wishes.

AFP asked if he started trying to teach people about the attack right after it happened.

“We were told by our own government,” he said, “don’t say a word about the attack, who did it, or why, or we would end up in prison or worse. Believe me, I took that to heart. I didn’t say anything about the USS Liberty until in the ’80s. In fact, I even forgot what day it happened.  That’s how much that admiral scared me.”

AFP asked if what keeps him going after all this time.

“It’s not really self-gratifying,” he said, “but it’s something I must do. And I’ll do it till the day I die. I’ve had death threats; I’ve had my lug nuts taken off my truck. I’ve had a lot of things happen to me. They don’t want me talking. That’s probably why most of the survivors don’t speak up, they’re afraid to.”

AFP asked if he wouldn’t mind recounting his recollection of the attack.

“At two o’clock in the afternoon the attack began with unmarked aircraft that lasted for about 35 to 40 minutes,” he began. “Strafing our ship, shooting anything that moved. They used napalm on us. They tried to burn us up,” he recalled. “There were over 850 cannon and rocket holes in the ship, over 5,000 armor-piercing bullets [and] a 40 by 40 foot hole in the starboard side from one of the torpedoes,” he continued.

“And this attacked last about as long as the attack on Pearl Harbor. Rescue aircraft were called back 15 minutes into the attack; the USS Saratoga and the USS America. LBJ, McNamara and John McCain’s daddy, who was in charge of the United States forces in Europe, was in charge of our ship. And he was part of the cover-up, and he was also part of the recall to leave us out there to die and blame it on a foreign government, and that government was Egypt. There were jet aircraft in the air that were getting ready to incinerate Cairo with nuclear-tipped missiles or bombs. If our ship didn’t go down, that’s exactly what they would’ve done. But we got the word out around the world, luckily, that…everybody knew who was doing it, the Israelis. Then the gig was up.”

AFP asked how he knew they were being attacked by Israel.

“The only reason we knew it was the Israelis is the torpedo boats,” he began. “We thought they were coming there to help us. Help was not gonna come from the Israelis, they wanted to murder every man aboard that ship.”

AFP asked him about the destruction of the life rafts.

“We only had three life rafts left,” he began. “We were gonna put the most seriously wounded in them.  They shot two of them out of the water and took one aboard their boat as a trophy, which is, I assume, in a museum somewhere in Israel.”

“You know, that’s a war crime, to shoot life rafts, to shoot men at sea. They’re supposed to give aid and comfort, and they did not give any comfort or aid. And then they said it was a mistaken identity. And our government went along with that lie, and each successive government, each president, has followed along with that lie.”

“You know, when you join the military, it’s like your mother and your father and your whole family put into one, especially in the United States, the greatest country in the world. Well that country left their men out there to die. And they say they leave no men behind. That’s a lie. They left us behind.”

AFP asked why he believes Israel has been able to get away with this for nearly 50 years.

“Israel can get by with murdering 34 Americans on the high seas,” he began, “they know they did it, but every Congressman and Senator is in the hip pocket of AIPAC and the ADL, you name it, most especially their master Israel. Our country’s been taken over by a foreign government, and that’s just a fact. I hate to say it, but it is a fact.”

AFP asked how his message has been muffled over the decades by pro-Israel forces.

AFP asked if horrific would be a good word for what happened that day.

“That would almost be an understatement,” he began. “The carnage and terrible destruction put upon our ship, our supposed ally, the Zionist state of Israel, it was something I thought I’d never seen in my lifetime and I hope I never see it again. That’s one of the reasons I wanted to do the book along with Mark, to get it down on paper, because we’re all getting older and they’re just waiting for us to die out and hopefully they’ll figure the story will die out too. Well, that isn’t gonna happen. There’s too many good people out there that’s gonna pick up the ball and run with it when we’re all gone. But were going keep on talking, we’re gonna keep on doing what we have to do to get the truth out. We’re eyewitnesses to cold-blooded, premeditated murder and attempted murder of almost 200 more men aboard the Liberty. I don’t know how many survivors are left out of a crew of 294. Initially 34 were killed instantly or almost instantly. I hope instantly rather than suffer, but the torpedo explosion took 25 men in one single blow. The torpedo from the Israeli torpedo boats, there were three of them. And they shot five torpedoes at us. One hit the starboard side, instantly blowing to bits 25 of my shipmates. And I mean blowing to bits. That is exactly what happened to them. Limbs blown apart from their torso; heads gone. Some of the most graphic, disturbing things that can happen to a human being happened aboard that ship June 8, 1967 and its aftermath.”

AFP asked if the attack itself was the worst part of his experience.

“The most disturbing part about this story is our country, the most powerful country in the world, put us in that position. We were in international waters doing exactly what we were told to do, and that was to pick signals out of the sky, which is perfectly legal.”