Following on the heels of recent news that, once again, a Chinese company has been busted making and selling products that are laced with deadly carcinogens, American Free Press is now selling in its online store vitamin C that is made outside of China.

In early July, The European Medicines Agency announced that its researchers had learned a Chinese biotech firm by the name of Zhejiang Huahai Pharmaceuticals was selling blood pressure and heart medication with the active ingredient valsartan that was found to be laced with a carcinogen. Health authorities in Europe and the United States have issued mandatory recalls for the medication, citing concerns that the vital medicine could sicken or even kill those who take it.

According to The Epoch Times, the medicines “contain an impurity called N-nitrosodimethylamine (NDMA) that is carcinogenic.”

The recall reportedly affects 2,300 batches of valsartan that were sold to 20 European countries, including Austria, Belgium, Bosnia and Herzegovina, Bulgaria, Croatia, Finland, France, Germany, Greece, Hungary, Ireland, Italy, Lithuania, Malta, the Netherlands, Norway, Poland, Portugal, Spain, and Sweden. Though the toxic medication from China was not sold in the U.S., the Food and Drug Administration is still not taking any chances and issued its own recall in the U.S.

China is notorious for making and selling poison products. According to reports, in the past few years, 60% of recalls for products in the U.S. have involved Chinese-made products. These include toothpaste, cosmetics, pet food, drywall, car tires, even children’s toys.

Just this week U.S. news headlines are cautioning parents to steer clear of certain school supplies after the U.S. Public Interest Research Group found that one brand of crayons—sold at one of the discount chains where many of today’s cash-strapped parents are looking for deals on ever-rising costs of back-to-school necessities—contain asbestos. In its recently released 2018 ”Safer School Supplies Shopping Guide,” U.S. PIRG reports phthalates and other dangerous chemicals have been found in other products, from 3-ring binders to erasers.

Why the United States continues to allow imports from China is beyond any of us, since the country cannot be trusted to maintain quality control of products its companies manufacture. Obviously that day will never come, so it is advised to avoid products that are made in China whenever possible.

There are always other options available.

Since China reportedly makes 95% of the vitamin C that is sold to all different brands of vitamin makers, it is almost guaranteed that any supplement you buy in stores or on the Internet will contain Chinese vitamin C. The keyword here, however, is “almost.” American Free Press is now partnering with Inteligent Vitamin C, which makes its supplements from a vitamin C that is manufactured in Scotland.

Sure, you may have to pay a few more dollars for clean products than for the cheap Chinese versions, but how much is your health—and your family’s health—worth to you? We would say it is worth paying an extra $10 a month for high-quality, safe, nontoxic vitamins.

Check out our new vitamin C products in the AFP Online Store, here. 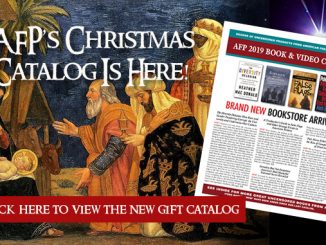