• School security expert goes to site of school massacre for answers, but town is locked down.

SANDY HOOK, CONN.—Wolfgang W. Halbig, who garnered international attention when an audio interview he had done with this reporter was released to the public, traveled to southwestern Connecticut May 5-6 to demand answers to his “16 simple questions.” His trip was funded by individual contributors from around the globe who distrust the official account of what happened on December 14, 2012, in what is referred to as the Sandy Hook Elementary School (SHES) event.

The donors anted up around $18,000 to support Halbig’s quest for answers in his first public move since the fundraising website was opened just over a month ago. Halbig’s goal is to raise $100,000 in order to get the “truth” behind what happened at SHES that autumn day. He has recently raised the goal to $250,000.

Both men flew into Connecticut on the evening of May 5, and were surprised to find that around a dozen individuals from across the country had arrived at Halbig’s hotel in Windsor, Conn. They traveled from as far away as Houston, Texas, to help support the men in their mission.

This reporter arrived in the Constitution State the afternoon of the same day, and traveled 60 miles north to Windsor to meet with Halbig and Fetzer at their hotel that evening, and met them and the supports in one of the hotel’s conference rooms.

Halbig’s itinerary included a stop at the United Way of Western Connecticut’s offices in Danbury on the morning of May 6, to view “records about the use of charitable funds collected on behalf of the Sandy Hook community,” and what occurred before he reached the charity set the tone for his short visit.

“We drove into Danbury and we were trying to find the address for United Way Western Connecticut,” explained Halbig, “and I think two houses from [there] I got pulled over for using a GPS and I got a $150 ticket.”

A Danbury police officer had witnessed Halbig holding his cell phone which was equipped with a Global Positioning System function.

“You’re not allowed to have any cellphones or any type of electronic equipment in your hands in the state of Connecticut; it’s against the law,” said Halbig.

Halbig and his entourage, which included at least five automobiles, were in the United Way’s parking lot for just a few minutes when they were joined by law enforcement.

“When we got to the United Way, I’ve never seen so many police officers. They were on bicycles, they were in police cars, and they were not very friendly,” lamented Halbig. “They had eight police vehicles with their sirens on and lights and they blocked us from going inside the building.” 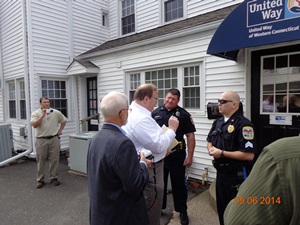 Halbig had telegraphed his trip through several websites and interviews on the Internet. He had told this reporter several months prior that the Newtown Police Department (NPD) was a regular visitor to the website of AMERICAN FREE PRESS, which is where they heard about his visit from an interview posted online.

Refused entry into the charity after a 90-minute standoff with police, Halbig’s next stop, which was not in the lineup, was to a local Danbury newspaper to inform them of their troubles at the United Way. After that, the next scheduled stop was to the NPD to meet with police Chief Michael Kehoe to apprise him of their visit. 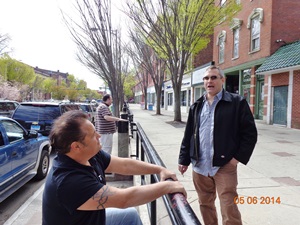 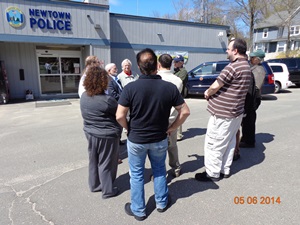 After this quick stop, the next scheduled visit was to the main station of the Sandy Hook Volunteer Fire and Rescue Company, Inc., (SHVFR) located next door to the razed SHES. Halbig was hoping to meet with fire Chief William Halstead. Instead, a verbal confrontation occurred between the former school principal and a volunteer fireman, who was unhappy with the unannounced visit. As the fireman was walking away from Halbig, he yelled that we all had one minute to vacate the premises. 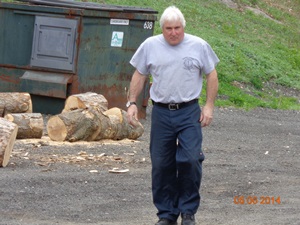 Lunch was next at the Foundry Kitchen and Tavern in Newtown, where Halbig’s entourage ate a 90-minute lunch. 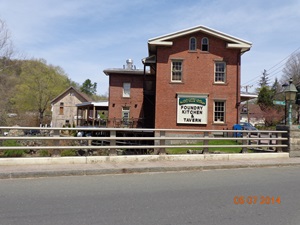 The caravan left lunch and congregated at Treadwell Memorial Park in Newtown to regroup before a revisit to the fire station, when the chief was set to return.

Returning to the fire station, the chief was not there, and the same fireman who verbally abused Halbig got physical.

“He shoved me with both of his hands,” recalled Halbig.

This reporter witnessed the fireman using the “f” word several times against Halbig before he lowered the garage door.

Halbig decided to call 9-1-1 and file charges, which didn’t go well for the crusader.

“The police department refused to give me the name of the person that hit me,” Halbig said.

The final stop was the Newtown Board of Education meeting on May 6 at 7:30 p.m. It was here that Halbig spoke to the board, as well as several of his entourage. 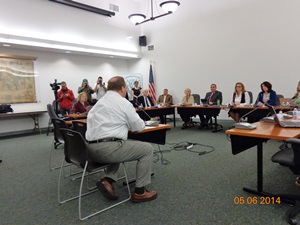 “Board members, these are your children,” Halbig said. “We want answers. We want truth.”

Board members refused to respond. “[They] remained silent throughout presentations by Halbig and several of his supporters who followed him to the microphone,” wrote the Hearst-owned Connecticut Post.

“But board members refused to take the bait, remaining silent throughout presentations by Halbig and several of his supporters who followed him to the microphone,” wrote the Hearst-owned Connecticut Post. 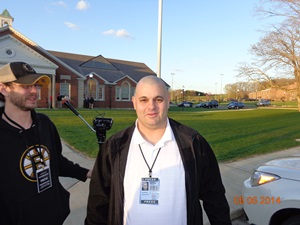 In the end, the short presentation to the stone-faced, flinty school board was the only success Halbig scored.