There is inevitably a great deal of discussion about where the Biden-Harris (Hillary Clinton?) foreign policy will go, particularly as there was, perhaps deliberately, virtually no discussion of the issue during the campaign. Although Russian President Vladimir Putin and his government’s foreign ministry have already committed themselves to resolving issues with the United States face-to-face with the new president, there has been little in the way of a reciprocal response from the Democrats. Indeed, the records of the prospective appointees to key positions in the Pentagon, intelligence, and national security communities would seem to indicate that hostility to Russia going back to Hillary’s defeat and the Russiagate myth that grew out of it will likely be driving the bilateral relationship.

Even a casual perusal of the Russian media suggests that the Kremlin is expecting things to get worse with the new regime, and that is saying a lot. It is preparing its defenses to respond to a dramatic increase in confrontations and even provocations from the incoming Biden team. Ironically even as this develops, Donald Trump continues to be labeled Putin’s poodle in spite of the fact that the relationship with Moscow is worse than at any other time since the end of the Cold War. The State and Treasury departments have been generous in handing out sanctions directed against Kremlin officials and other organizations, and it is impossible to ignore the increase in war games and other military exercises on the part of U.S.-led NATO that have taken place right up against Russia’s border.

Mr. Trump’s welcome and much heralded recent move to shift troops from Germany, if it is actually completed, will have many of the soldiers going to new bases in Poland, a frontline state with Russia. Congress has just passed the current iteration of a bloated National Defense Authorization Act (NDAA) over a Trump veto that will limit presidential authority to move soldiers without the consent of the legislature, guaranteeing the status quo of an unfriendly NATO versus Russia for the foreseeable future.

The fact is that the Washington establishment sees United States military dominance over a post-Cold War “defeated” Russia as a sine qua non essential element of America’s foreign and national security policies. The view is bipartisan and is largely embraced by the media, which has been playing up the allegations that Russia has been engaged in widespread hacking of U.S. government computers as well as the networks used by major corporations. The New York Times, clearly relying on its own government sources, has published alarming headlines like “As Understanding of Russian Hacking Grows, So Does Alarm: Those behind the widespread intrusion into government and corporate networks exploited seams in U.S. defenses” on articles that fail to provide any solid evidence that Moscow was involved in anything beyond the usual spying and probing that the U.S. intelligence agencies also engage in with both friend and foe alike.

Former weapons inspector Scott Ritter notes the language that American leaders use when speaking of Russia. He cites comments made to the media on Christmas Eve by Russian Deputy Foreign Minister Sergey Ryabkov, who focused on the general direction of U.S. policy, accusing America’s foreign policy establishment of “accommodating the domestic needs of those interested in further non-stop escalation of tensions in relations with Russia, and letting them know that Washington, led by the current administration, has no intention to slow down its anti-Russian campaign.”

He also made an observation regarding the use by Mr. Biden of the term “adversary” when describing Russia. Ryabkov explained U.S. policy toward Russia:

“[Y]ou are adversaries. You should sit in your trench while we will do everything we can to make things worse and more difficult for you.” It is crystal clear this is the essence of the U.S. policy [toward] Russia. This is what [Russia] should proceed from and we have no illusions about who we are dealing with on the other side. The situation will fully persist under the new administration.

“Adversary” is, of course, one step down from “enemy,” which would more accurately describe U.S. policy toward Moscow vis-a-vis Ukraine, Syria, and even regarding the planned Nord Stream 2 gas pipeline to Germany, which President Trump, Secretary of State Mike Pompeo and others have described as a threat to U.S. national security. Congress apparently agrees. The recently passed NDAA includes selective sanctions to kill the $11 billion project which benefits both Russia and Germany including the targeting of any companies and individuals providing help to advance the construction. The needed upgrade of a ship required to lay the pipeline, procurement of other equipment used to put in place the pipes, and insurance are all specifically named in the legislation. It is, to put it mildly, direct interference in the peaceful business dealings between two major nations with which the United States is not at war.

Not surprisingly, a similar pattern is playing out with China, which is currently accused of actively seeking to supplant the U.S. as the world’s largest economy within 10 years. The claimed Chinese “existential threat” has more to do with the corruption of America’s industrial policy by special interests than it does with any alleged nefarious moves by Beijing. But, as in the case of Russia, the United States does not play well with competitors and is more than willing to elevate trade issues into national security threats. Indeed, the U.S. has used a variety of pretexts to engage in interventionist policies all over the world.

If the Biden administration seriously seeks a new national security agenda, it would well be advised to step back and try to determine what actually constitutes a threat to the United States. It would quickly determine that Russia and China are both competitors that can be dealt with safely by treating both countries with respect while also recognizing that they too have national interests. Unfortunately, it does not seem that Mr. Biden or the constituencies that he answers to have any such vision for the future.

Too Many Wars. Too Many Enemies. 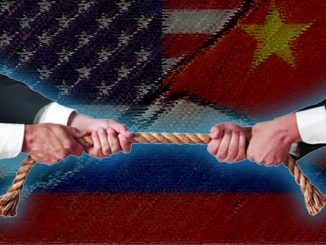