It remains to be seen if the failed May 3 operation to kill or capture Venezuelan leader Nicolas Maduro was indeed a real coup attempt or part of a wider conspiracy to launch terror attacks, thereby creating instability within the country.

The use of terror to destabilize regimes that Washington has marked for regime change is a familiar tactic, and for another example one has to look no further than Iran, which has endured a campaign of terror launched by its enemies, including Israel, the Saudis, and the U.S. In respect of Iran, its enemies have deployed members of the MEK—Mujahideen e-Khalq—who were trained by the CIA and others. The Israelis even used their own assassins to kill some of Iran’s brightest scientists in multiple fields. When Syria was selected for regime change, the U.S., along with its NATO partners including Turkey, Israel, and Saudi Arabia, trained and armed Islamic militias such as the al Nusra Front to attack Syrian forces.

The use of proxies is nothing new, but it is always a well-organized strategy, very unlike the May 3 fiasco off the waters of Venezuela. There, two former U.S. special forces soldiers and a group of mercenaries they had been training in nearby Colombia were intercepted by Venezuelan Special Forces. In an ensuing action, six members of the invading force were killed. While this was happening, special security units in the Venezuelan capital of Caracas raided a house and seized a number of suspects as well as a small arsenal of weapons, explosives, and surveillance equipment. An American was reported to be among those arrested.

It was quickly revealed that the small invasion force was traveling in speedboats and numbered close to 50, though there were other members of the force who were tasked to land at a separate location. They, too, were soon rounded up. The two U.S. special ops soldiers captured with the main assault team were identified as Luke Denman and Aaron Berry, who served honorably in Iraq with the 10th Special Forces Group. Their boss for Operation Gideon, the codename for the plot, was a former Green Beret, Canadian-born Jordan Goudreau, who ran a contractor company out of Florida called SilverCorp. It appears that Goudreau, who claims that he runs ops around the globe, has boasted about his links to President Donald Trump, which has yet to be proven.

All in all, it was a military fiasco, and the Venezuelan authorities say they had prior knowledge of it. There is reason to believe the Venezuelans had spies within the training camps that Goudreau’s people ran in the Colombian jungle, and possibly among his financial backers. One of the things worth noting about operations of this kind is that those running them always have prepared cover stories in case the ops go wrong, as this one did. Goudreau lost no time admitting that it was a coup attempt and that the two U.S. special ops soldiers and their force had planned to abduct the Venezuelan president and presumably return him to the U.S. to be tried for narcotics trafficking. That is simply ridiculous. How was a tiny force, made up of ragtag mercenaries, mostly ex-Venezuelan soldiers, going to make it all the way to Caracas, assault the heavily fortified presidential palace, seize Maduro, and presumably return him to the U.S. via Colombia? Made much more wary from previous coup attempts, Maduro is guarded by a well-trained security force. It is more likely the Goudreau force had other objectives that were thwarted. If the objectives include a terror campaign, it is unlikely it would be something Goudreau would be prepared to admit. It is one thing to talk about abducting Maduro. It is quite another to plan assassinations, bombings, and the like.

The international media lost no time buying into the colorful narrative that this was an abortive coup of the “Rambo” variety. Goudreau was happy to tell the media that this was only a setback, and Operation Gideon would continue. He claimed that Berry and Denman were captured because their boat ran out of fuel, adding yet another absurd element to the apparent fiasco. But, while it is easy to dismiss this as a debacle, it is equally important to note that this was a military operation by a U.S. company targeting another country. As such, Goudreau should face charges. But the most intriguing aspect of the whole affair is the question of who financed and ordered it? While some in the media began comparing it to the disastrous Bay of Pigs invasion of Cuba during the JFK era, the fact is that this was an operation on a much smaller scale with no apparent CIA involvement, though it is hard to believe the CIA didn’t know in advance about the operation. (Those making fun of the pathetic nature of the operation are calling it the Bay of Piglets.)

Within days of the capture of the invasion force, The Washington Post was given a copy of a contract between Goudreau and Venezuelan opposition leader Juan Guaido, the man favored by Trump and Congress to run Venezuela, a nation with some of the world’s largest oil reserves. The 41-page contract offered $219 million to liberate Venezuela. It was signed by Guaido’s representatives, leaving the impression that Guaido himself has signed a truncated version of the original documents.

Guaido has claimed the contract is a fake, but it’s too late. “El gato está fuera de la bolsa.” That fact alone allows one to conclude that if Washington’s favored leader was involved in this plot, the CIA had to know—and so did the president. One might be obliged to ask why no one stopped Guaido from signing the contract. After all, militarily, this was no serious coup attempt, unless of course it was never planned as a coup but as an ongoing op that would bring terror to Venezuela and weaken the regime.* Goudreau has already said that Operation Gideon will continue, but can it really do so now that so many of the conspirators have been identified? Is he likely to offer himself to the Venezuelans in exchange for Denman and Berry? Or did other terrorists slip into other areas of Venezuela and this was all a cover for a larger operation? Time will tell.

GLADIO: NATO’S Dagger at the Heart of Europe by Richard Cottrell. Wet works, false flags, terror plots, assassinations, and subversion pin Europe down as a U.S. colony. Gladio architect Lyman Lemnitzer is implicated in the 1944 reintroduction of the Mafia into Sicily and the murders of the Kennedy brothers. Covert NATO operations were behind the color revolutions of Eastern Europe and North Africa, and the massacres of August 2011 in Norway and Libya. Softcover, 498 pages, $25 plus $4 S&H inside the U.S. from AFP, 117 La Grange Avenue, la Plata, MD 20646. 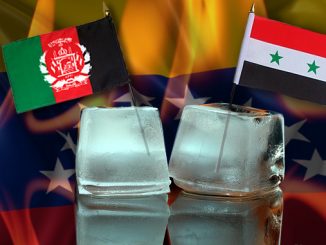 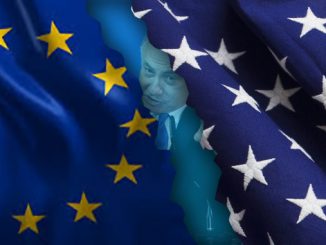 Rift Has Never Been Wider Between the U.S. and EU