• State Department officials seem determined to start a war with the Russians.

Some 50 State Department officials have signed a memo calling on President Barack Obama to launch air and missile strikes on the Damascus regime of Bashar Assad.

A “judicious use of stand-off and air weapons,” they claim, “would undergird and drive a more focused and hard-nosed U.S.-led diplomatic process.” In brief, to strengthen the hand of our diplomats and show we mean business, we should start bombing and killing Syrian soldiers.

Yet Syria has not attacked us. And Congress has not declared war on Syria, or authorized an attack. Where do these State hawks think Obama gets the authority to launch a war on Syria?

Does the Department of State consider the Constitution to be purely advisory when it grants Congress the sole power to declare war? Was not waging aggressive war the principal charge against the Nazis at Nuremberg?

If U.S. bombs and missiles rain down on Damascus, to the cheers of the C-Street Pattons, what do we do if Bashar Assad’s allies Iran and Hezbollah retaliate with Benghazi-type attacks on U.S. diplomats across the Middle East? What do we do if Syrian missiles and Russian planes start shooting down U.S. planes? Go to war with Hezbollah, Iran, and Russia?

Assume U.S. strikes break Syria’s regime and Assad falls and flees. Who fills the power vacuum in Damascus, if not the most ruthless of the terrorist forces in that country, al-Nusra and ISIS?

Should ISIS reach Damascus first, and a slaughter of Alawites and Christians ensue, would we send an American army to save them?

According to CIA Director John Brennan, ISIS is spreading and coming to Europe and America. Does it make sense then that we would launch air and missile strikes against a Syrian regime and army that is today the last line of defense between ISIS and Damascus? 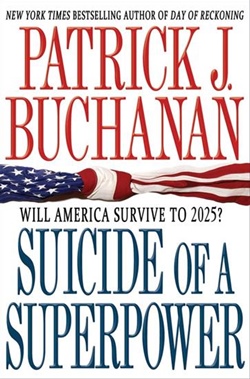 Does anyone think these things through? Wherever, across the Middle East, we have plunged in to wage war—Afghanistan, Iraq, Libya, Yemen, Syria—people continue to suffer and die, and we are ensnared. Have we not fought enough wars in this Godforsaken region?

Last week, Russian planes launched air strikes on the rebels in Syria whom we have been arming and training to overthrow Assad. Said John Kerry, “Russia needs to understand that our patience is not infinite.” But why are we arming rebels to overthrow Assad? Who rises if he falls? Moscow’s alliance with Damascus goes back decades. Syria provides Russia with a naval base in the Mediterranean. Vladimir Putin’s support for the embattled Syrian regime in the civil war being waged against it is legal under international law.

Where did Obama get the right to arm and train rebels to dump over the Damascus regime? Did Congress authorize this insurrection? Or is this just another CIA-National Endowment for Democracy project? Why are we trying to bring down Assad, anyhow? U.S. foreign policy today seems unthinking, reactive, impulsive.

Last week, 31,000 NATO troops conducted exercises in Poland and the Baltic republics, right alongside the border with Russia. For the first time since 1945, German tanks appeared in Poland.

Now we are planning to base four NATO battalions—one U.S. led, one British, one German, and perhaps one Canadian, as the French and Italians are balking at being part of a tripwire for war.

How would we react if 31,000 Russian, Chinese, Cuban, Iranian, and North Korean troops conducted military exercises across from El Paso and Brownsville, Texas? How would we react if each of those countries left behind a battalion of troops to prevent a repeat of General “Black Jack” Pershing’s intervention in Mexico in 1916? Americans would be apoplectic.

This month, we sent the USS Porter into the Black Sea. Why? Says Navy Secretary Ray Mabus, “to deter potential aggression.” The European Union also just voted to extend sanctions on Russia for annexing Crimea and supporting separatists in Ukraine.

Donald Trump calls the NATO alliance a rip-off, a tripwire for World War III, and “obsolete.” Hillary Clinton compares Putin’s actions in Ukraine to Hitler’s actions in Germany in the early 1930s.

Looking for a four-year faceoff with a nuclear-armed Russia? Hillary’s the one!