After serving 30 years, not enough time by any measure for the damage he did to the United States, American-Jewish spy-for-Israel Jonathan J. Pollard, “will walk out of prison on Friday . . . but the Obama administration has no plans to let him leave the country and move to Israel as he has requested,” squealed The New York Times.

Incredibly, two Democratic Jewish (which the Times failed to note) congressmen from New York wrote to the Department of Justice “urging Attorney General Loretta E. Lynch to grant the request, saying that Mr. Pollard would be willing to renounce his American citizenship and never return to the United States.”

“I don’t know why we wouldn’t approve that,” said Representative Eliot L. Engel of New York, the top Democrat on the House Foreign Affairs Committee, who wrote last week’s letter along with Representative Jerrold Nadler, another New York Democrat. “He served his full term. I don’t know what good it does except to keep the whole show going.”

Are these congressmen representing Americans or Israelis? You decide.

In the meantime, get the book below to learn all about this traitor Pollard, written by the man who captured him. 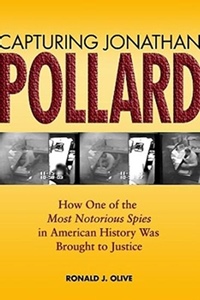 Read more on the traitor, via the slanted coverage of the mainstream media: