I am a constituent of Arizona Senator John McCain, a presidential contender in 2008. I reside in the congressional district where he ran for Congress four years before the expected 1986 retirement of Senator Barry Goldwater. McCain’s career was modeled after that well-known Republican maverick.

McCain describes himself as the leader of the party of Abraham Lincoln and maverick Ronald Reagan.

I knew Goldwater, albeit slightly. I served for seven years as counsel to the Senate Finance Committee, leaving in 1987, the same year he retired. McCain now holds Goldwater’s Senate seat. Though branded a “maverick,” that’s no more accurate than the phony “hero” status in which McCain wraps himself along with the flag.

I met McCain in early June at a town hall meeting in Tempe, Arizona. He came to the Senate in 1987 just as I went into law practice with retiring Senators Russell Long of Louisiana, my boss, and Paul Laxalt of Nevada, who chaired Reagan’s presidential campaigns.

At the town hall meeting, I sat up front to ask “my” senator a question. That question was the result of seven years of full-time research by a constituent into the impact on national policy-making of transnational organized crime, particularly in Arizona.

That background is chronicled in Guilt by Association where, as I explained to McCain, I took three chapters to summarize his disturbing mob-related history.

In Arizona, his true history is seldom mentioned. Don Bolles was the last person to write about the criminal syndicate that recruited McCain to replace Goldwater. Bolles was rewarded with six sticks of dynamite under his car. He lost both legs and an arm.

Before his death 11 days later, he identified John Adamson as the man who placed the charge. Adamson, in turn, identified Kemper Marley, the statewide liquor magnate and employer of Gene Hensley, McCain’s father-in-law to be. Bolles also implicated organized crime and Emprise, a New York sports franchise with which Hensley and his brother were associated through a racetrack they acquired in New Mexico.

By all credible accounts, this mob hit was ordered by Marley after Bolles’s story forced his resignation from the state racing commission. New Mexico state police chronicled the Marley connection. Since the founding of the national crime syndicate in 1929, that service linked organized crime’s far-flung gambling operations in the United States, Canada, Mexico and Cuba.

Its origins trace to Chicagoan Moses “Moe” Annenberg, the father of Walter Annenberg, Reagan’s “best friend for 50 years” according to Nancy Reagan.

The same Ashkenazi “Chicago Outfit” that produced the early career of “conservative” Reagan also produced “liberal” Barack Obama when he first gained political prominence as an activist with Chicago’s Annenberg Education Challenge. The grandfather and the great-grandfather of the top fundraiser for Obama were lawyers for the outfit.

In truth, Bolles barely scratched the surface. The same outfit that put McCain in office also brought to Washington (now former) Secretary of Homeland Security Janet Napolitano, a former governor of Arizona and prior to that, the state’s attorney general.

Thus the reason for asking McCain to explain to his constituents why he met abroad with Russian-Jewish oligarch Oleg Deripaska, who, by age 40, had amassed $40 billion in assets defrauded from the Russian people.

First McCain denied meeting him other than at an annual conference in Davos, Switzerland. When pressed, he conceded that he and Deripaska shared a private dinner with Lord Rothschild V. At the time, Deripaska was banned from the United States due to his ties to Russian organized crime.

McCain declined to explain why he met with this mobster. Deripaska married into the family of Russian President Boris Yeltsin to perpetrate a national-scale fraud. Until our subprime mega-fraud, the financial pillaging of Russia was the largest heist in history.

Realizing he had said too much by revealing the Rothschild dinner, McCain changed the subject.

What was my impression as a constituent? Though stunned at the palpable weakness of his character, it was oddly comforting to hear him concede his role as an evildoer.

Jeff Gates is an author and researcher based in Arizona.

• Presidential candidate opens up Arizona senator’s ‘dirty can of worms’

Earlier in July, at a political conference in Iowa, presidential candidate Donald Trump stated that Senator John Sidney McCain III (R-Ariz) was not a war hero. Although Trump was absolutely correct, as he was on the subject of illegal immigration, he didn’t provide all the facts about McCain’s fabricated past.

On July 18, to much laughter and applause, Trump blasted McCain during a speech to the Family Leadership Summit in Ames, Iowa. Here’s the relevant portion of what Trump had to say:

[McCain] is not a war hero. He was a war hero because he was captured. I like people who were not captured. . . . I believe right now [McCain] said some very bad things about a lot of people. So what I said is, John McCain, I disagree with him but these people aren’t crazy, and, very importantly—and I speak the truth—he graduated last in his class at Annapolis. . . . And he was upset. I said, “Why? For telling the truth?” See, you’re not supposed to say that somebody graduated last in their class, because you’re supposed to be nice. I want to make America great again. We don’t want to listen to this stuff, being politically correct. . . . The other day Hillary Clinton got up and said, “I didn’t like Mr. Trump’s tone.” We have people—Christians—having their heads cut off in the Middle East. We have people dying all over the border—where I was right, 100% percent. . . . You know who else said that? Jeb Bush: “I didn’t like his tone.” What does this have to do with tone? We want results. [I don’t care about] tone.

To get the story behind McCain, on July 22 AMERICAN FREE PRESS interviewed Bill Dumas, a screenwriter and filmmaker whose movie, Missing, Presumed Dead: The Search for America’s POWs, won the award for best documentary at the Visions Film Festival and Fort Myers Beach Film Festival. He is also the nephew of Colonel Bob Dumas, a Korean War veteran and celebrated POW/MIA activist. Dumas was also a video production supervisor for Ron Paul’s 2008 presidential campaign.

Dumas began by telling AFP: “The injuries that John McCain has today didn’t occur from being tortured in a North Vietnamese prison camp. Instead, they resulted from an [Oct. 26, 1967] plane crash because he failed to follow the proper procedures upon ejection. That’s how he broke his leg and both arms.”

That’s just the beginning of the story, added Dumas.

“McCain wasn’t a very good pilot to begin with,” he said. “On the day of his plane crash, McCain missed a scheduled bombing run. But instead of returning to his aircraft carrier [USS Oriskany], to save face, McCain did a big loop and went back. Not surprisingly, VC with anti-aircraft missiles were waiting for him. He was a sitting duck—an easy target.”

As for the circumstances surrounding his incarceration, Dumas said: “Other POWs have said that by the time of McCain’s incarceration, prisoners weren’t even being tortured any longer. These same men referred to McCain as ‘the Prince’ because of his preferential treatment.”

In return for special treatment, McCain did the unthinkable.

Said Dumas: “Army Colonel Earl Hopper said that right after McCain’s capture, the Viet Cong immediately received intel on bombing runs. Due to being privy to this information, the VC laid in wait, causing the United States to have many planes shot down. McCain insists that he only provided false intel, but Hopper is convinced that he gave actual data.”

Dumas expanded on McCain’s tactics after McCain was elected to the Senate.

“When Senator Bob Smith (R-NH) and other legislators attempted to open POW records, McCain went behind their backs and passed a stealth bill that kept all of these files classified,” said Dumas. “Also, if you watch footage from a 1992 congressional hearing, McCain was so rude to the sister of an MIA that he reduced this woman to tears in the Senate chamber. Anyone that advocates for POWs hits a raw nerve with McCain. He even calls them liars because there’s so much of his own history that he doesn’t want revealed.”

Dumas added: “Former Representative Bob Dornan [R-Calif.] once mentioned that McCain had presidential aspirations since his earliest days. He knew that being a war hero would help his cause, so McCain has always gone to great lengths to keep his story intact by protecting POW lies.”

Maybe the most sordid chapter of McCain’s false narrative transpired on July 29, 1967 when the deadliest post-WWII fire in U.S. Naval history broke out on the USS Forrestal. Some 134 sailors were killed, while 161 others received serious injuries. 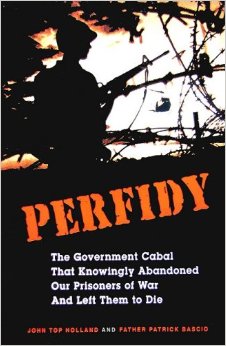 To obtain more details regarding this tragic event, on July 20 AFP spoke with Gary W. Brummett, a surviving member of the USS Liberty, which was deliberately attacked by Israeli forces on June 8, 1967.

“McCain was hot-dogging in his [A-4E] jet when he wet-started it. When doing so, his plane flamed-out. When these flames shot from the tail of his aircraft, it caused the plane behind him to shoot a missile. A massive explosion ensued, which caused the deadly fire to break out. There was something like $60 million in damage to the Forrestal.”

“A close friend, Dick Thompson, who has been one of our most ardent USS Liberty supporters, told me that during the first year of McCain’s return to the states, he was a total drunkard,” said Brummett. “When Thompson went to McCain on two different occasions and asked for help in opening the Liberty case, McCain told him to leave it alone. McCain knows who we are, but any help on his part would expose his father’s role in the Liberty cover-up.”

McCain’s father, Admiral John S. McCain, helped U.S. and Israeli officials cover up the Israeli murder of 34 Americans aboard the USS Liberty during the Six Day War in 1967.

In terms of McCain’s status as a war hero being questioned, Brummett unequivocally told AFP: “Donald Trump is saying and doing what all these other politically correct fools won’t touch. He’s putting some things out there that need to be said.”

Finally, on July 20, AFP also contacted longtime political researcher Roark Dority. When questioned about McCain’s silence on the USS Liberty, Dority answered: “He probably learned how to conduct himself in a similar fashion to his
father. It’s treasonous and a total slap in the face of every crewman aboard the Liberty. It’s an outrage that McCain is covering up something that was an outrage in the first place.”

6 Comments on The McCains’ Connections to Organized Gangsters; Trump Speaks Truth About McCain