The “fiscal cliff” is another hoax designed to shift the attention of policymakers, the media and the attentive public, if any, from huge problems to small ones.

The fiscal cliff is automatic spending cuts and tax increases in order to reduce the deficit by an insignificant amount over 10 years if Congress takes no action itself to cut spending and to raise taxes. In other words, going over the “fiscal cliff” is going to happen either way.

The problem from the standpoint of conventional economics with the fiscal cliff is that it amounts to a double-barrel dose of austerity delivered to a faltering and recessionary economy. Ever since John Maynard Keynes, most economists have understood that austerity is not the answer to recession or depression.

Regardless, the fiscal cliff is about small numbers compared to the derivatives tsunami or to bond market and dollar-market bubbles.

The fiscal cliff requires that the federal government cut spending by $1.3T over 10 years. The Guardian reports, that means the federal deficit has to be reduced about $109B per year or 3% of the current budget. More simply, just divide $1.3T by 10, and it comes to $130B per year. This can be done by simply taking a three month vacation each year from Washington’s wars.

The derivatives tsunami and the bond and dollar bubbles are of a different magnitude.

In a June 5, 2012, column, titled “Collapse At Hand,” I pointed out that according to the Office of the Comptroller of the Currency’s fourth quarter report for 2011, about 95% of the $230T in U.S. derivative exposure was held by four U.S. financial institutions: JPMorgan Chase Bank, Bank of America, Citibank and Goldman Sachs.

Prior to financial deregulation, essentially the repeal of the Glass-Steagall Act and the non-regulation of derivatives—a joint achievement of the Clinton administration and the Republican Party—Chase, Bank of America and Citibank were commercial banks that took depositors’ deposits and made loans to businesses and consumers and purchased Treasury bonds with any extra reserves. With the repeal of Glass-Steagall these honest commercial banks became gambling casinos, like the investment bank Goldman Sachs, betting not only their own money but also depositors’ money on uncovered bets on interest rates, currency exchange rates, mortgages and prices of commodities and equities.

These bets soon exceeded many times not only U.S. gross domestic product (GDP) but world GDP. Indeed, the gambling bets of JPMorgan Chase Bank alone are equal to world GDP.

According to the Q1 2012 report from the comptroller of the currency, total derivative exposure of U.S. banks has fallen insignificantly from the previous quarter to $227T. The exposure of the four U.S. banks accounts for almost all of the exposure and is many multiples of their assets or of their risk capital.

The derivatives tsunami is the result of the handful of fools and corrupt public officials who deregulated the U.S. financial system. Today merely four U.S. banks have derivative exposure equal to 3.3 times world GDP. When I was a U.S. Treasury official, such a possibility would have been considered beyond science fiction. 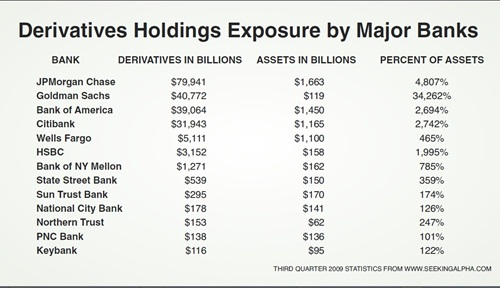 Hopefully, much of the derivative exposure somehow nets out so that the net exposure, while still larger than many countries’ GDPs, is not in the hundreds of trillions of dollars. Still, the situation is so worrying to the Federal Reserve that after announcing a third round of quantitative easing (QE 3), that is, printing money to buy bonds—both U.S. Treasuries and the banks’ bad assets—the Fed has just announced that it is doubling its QE 3 purchases.

The purpose of QE is to keep the prices of debt, which supports the banks’ bets, high. The Fed claims that the purpose of its massive monetization of debt is to help the economy with low interest rates and increased home sales. But the Fed’s policy is hurting the economy by depriving savers, especially the retired, of interest income, forcing them to draw down their savings. Real interest rates paid on CDs, money market funds and bonds are lower than the rate of inflation.

Moreover, the money that the Fed is creating in order to bail out the four banks is making holders of dollars, both at home and abroad, nervous. If investors desert the dollar and its exchange value falls, the price of the financial instruments that the Fed’s purchases are supporting will also fall, and interest rates will rise. The only way the Fed could support the dollar would be to raise interest rates. In that event, bondholders would be wiped out, and the interest charges on the government’s debt would explode.

With such a catastrophe following the previous stock and real estate collapses, the remnants of people’s wealth would be wiped out. Investors have been deserting equities for “safe” U.S. Treasuries. This is why the Fed can keep bond prices so high that the real interest rate is negative.

The hyped threat of the fiscal cliff is immaterial compared to the threat of the derivatives overhang and the threat to the U.S. dollar and bond market of the Fed’s commitment to save four U.S. banks.

Once again, the media and its master, the U.S. government, hide the real issues behind a fake one. The fiscal cliff has become the way for the Republicans to save the country from bankruptcy by destroying the social safety net put in place during the 1930s, supplemented by Lyndon Johnson’s “Great Society” in the mid-1960s.

Now that there are no jobs, now that real family incomes have been stagnant or declining for decades and now that wealth and income have been concentrated in few hands is the time, Republicans say, to destroy the social safety net so that we don’t fall over the fiscal cliff.

In human history, such a policy usually produces revolt and revolution, which is what the U.S. so desperately needs. Perhaps our stupid and corrupt policymakers are doing us a favor after all.

Paul Craig Roberts is a former assistant undersecretary of the U.S. Treasury and former associate editor of The Wall Street Journal. He is the author of many books including The Tyranny of Good Intentions, Alienation and the Soviet Economy, How the Economy Was Lost and others.

Maybe D.C. Should Have Jumped Off the Cliff

For months we’ve been told that the world was coming to an end. No, I’m not talking about the expiration of the Mayan calendar. I’m referring to the much-hyped “fiscal cliff” and the economic catastrophe that was said to take effect after January 1, 2013.

We were led to believe that—unless our politicians took the appropriate action—we’d be faced with massive spending cuts and tax increases that would plunge the U.S. into a recession-plagued year of high unemployment and a dramatic drop in the inflation- adjusted gross domestic product.

But now that all the brouhaha has subsided in the wake of a bi-partisan “deal” that was recently approved in the House, I’m left wondering if we might have been better off if the world had come to an end—at least an end to the world envisioned by Washington D.C. and their clients on Wall Street.

The rich still made out like bandits. Multinational firms are no longer required to pay taxes on all revenue generated on foreign soil, meaning that you can now expect more jobs to be shipped overseas.

Then there’s Goldman Sachs and Bank of America, which both get tax exempt financing to build luxury apartments and office towers in Manhattan.

And let’s not forget the hundreds of millions of dollars in tax breaks and subsidies for America’s “bread and circus” industries: Hollywood producers, motor speedway owners and rum manufacturers to name a few.

Of course America’s war machine is still expected to remain intact. “The harshest scenario for defense cuts would only put budgets back about the 2007 level, and they aren’t even really ‘cuts’ to defense spending; they are reductions in the rate of growth of defense spending,” says foreign policy analyst John Glaser. “Either way, the budget for military empire and wars will grow.”

The ones hardest hit by the new deal are the nearly 80% of working class Americans who will see their tax rates increase from 4.2% to 6.2% due to an expiration of the so-called payroll tax holiday. This is an increase of about 50%.

Retirees and the disabled are expected to be the next on the chopping block. When a temporary measure to fund government activity expires on March 27, social safety net programs that American’s have paid into for years will once again be held to scrutiny. According to AP, “Republicans say they are willing to raise the debt ceiling but insist any increase must be paired with significant savings from Medicare, Medicaid and other government benefit programs.”

Likewise, President Obama has also signaled a willingness to target these programs. “I am very open to compromise,” he said after the passage of the House vote on January 2. “Medicare is the biggest contribution to the deficit.”

The worst of the fiscal cliff is only a few months down the road. But maybe there’s a silver lining if we just went ahead and took the plunge. After all, it was only after Americans were led to believe that their wallets would be drained at the stroke of midnight that they woke up and took notice. Perhaps real economic hardship is what it will take to wake them up again.

Frankly, I would rather suffer now than kick the can down the road and let future generations pay for the bitter fruits of our complacency.

Keith Johnson in an investigative journalist and host of the Revolt of the Plebs radio program.