A new book details how Supreme Court justices have subverted the U.S. Constitution and supplanted Congress as the “supreme law of the land”—and why we should all be worried. This matter is of extreme importance as we wait to see which of the presidential candidates will be picking the next generation of justices after the Nov. 8 election.

Although many reasons are offered as to why this once-great nation has gone off the rails and is headed for disaster, a new book by a former state prosecutor—who was once described as “the prickly pear of Eastern Washington”—zeroes in on what he believes is the most likely culprit: the Supreme Court. 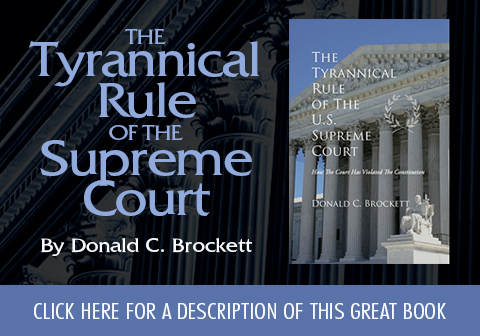 Recently, AMERICAN FREE PRESS conducted an exclusive interview with Donald C. Brockett, the 80-year-old author of The Tyrannical Rule of the U.S. Supreme Court: How the Court Has Violated the Constitution.

“In 1969, while I was a deputy prosecuting attorney, I was appointed to fill the elected prosecutor’s position when he retired,” said Brockett. “I subsequently ran for office six times and was reelected, serving as the elected prosecutor for 25 years. I then left the office and ended up in private practice after a short bout with colon cancer and the treatment for it. Seven years later I decided to re-retire and, while sitting around at home, decided that there was something I still needed to do, which was to tell people what I thought was a concern of mine in the country in terms of what our Supreme Court has done to us.”

As Brockett explains in his fine book, the Supreme Court was designed to rule on issues related only to the United States, not the states, and to be the least significant of the three branches of the federal government.

Trouble began early on, however, in 1803, only 27 years after the nation’s birth, in a Supreme Court case Marbury v. Madison.

“The main culprit goes way back to Justice Marshall’s opinion when he decided that the court had the right of what he called ‘judicial review,’ although the court found it didn’t have jurisdiction to rule,” Brockett explained. “So that should’ve been the end of the case. However, Justice Marshall went on to opine—and I call it the meanderings of the judge—in what’s called by the Latin term dicta—something outside of the opinion itself—that the court had the right to interpret the Constitution and in fact had a duty to do so.”

The main author of the Constitution took notice of the ruling and the peril it foretold.

Said Brockett: “Thomas Jefferson, of course, picked up on it immediately, and wrote to his friend, saying, ‘This concept of judicial review of the Constitution itself is preposterous and will result in the court becoming the sole governing body over government.’ He wrote, ‘This is totally ridiculous that Marshall would hold this way, because that would make the court in a position to be a tyrannical rule of the people of the United States of America.’ And that’s exactly what’s occurred.”

Besides the dangerous precedent set by Congress accepting “judicial review” and other dicta that followed, a constitutional amendment, put in place after the so-called Civil War, opened the door to allow the Supreme Court to rule on state issues.

“They have misinterpreted the 14th Amendment, which had a specific purpose to protect the people who had previously been slaves, who were freed by the Emancipation Proclamation,” explained Brockett.

AFP asked how Marshall’s ruling was allowed to stand. “It happened progressively over the years because people just basically accepted it,” Brockett answered. “Now, what I don’t understand—of course, they don’t teach civics anymore in school—is why people don’t go back and study this and find that the people who wrote the Constitution said if a court ever gets carried away and doesn’t understand its position as the least important of the branches of government, they can simply be impeached.

“Right to dignity” is a court-created term used in the recent Supreme Court case Obergefell v. Hodges, which legalized gay marriage. The court ruled a right to marry is guaranteed to same-sex couples by both the Due Process Clause and the Equal Protection Clause of the 14th Amendment.

“Justice Scalia, who unfortunately passed away recently, said of the same-sex marriage case, ‘Today’s opinion says that we are ruled by nine lawyers,’ ” said Brockett. “Now, most people don’t understand the significance of that, but for a judge to call his fellow judges lawyers is really demeaning them, putting them down and saying they don’t deserve the position to which they’ve been appointed because they’re ‘just lawyers.’ [On the other hand,] they’re saying they have the ability to overturn what history has designated for all these millennia as a marriage.”

Brockett explains in his book that the only way to change the law of the land is through the Constitution’s Article V, not the court.

“Those things in the Constitution—people don’t seem to understand this—were put there to guard us against the federal government,” Brockett warned. “They were meant to protect the state governments, because our elected officials are closer to us.”

Brockett thought his book would be well-received by other lawyers and mailed several dozen copies to law professors. “I have sent I don’t know how many books and information about the book to professors, who teach constitutional law in law schools, thinking that they might have an interest in a different opinion,” Brockett explained. “No response.”

Brockett explained why he wrote the book: “I want people to look at it and start a conversation and say, ‘Wait a minute; I disagree for these reasons,’ or ‘Wow, I never thought about it that way before.’ They’ve got to get up off their couches, quit sitting in front of the dumb media, accepting everything they’re being told, get their noses out of their cell phones, quit worrying about whether or not their hair looks good in a ‘selfie,’ and start wondering about whether or not this is the country they want to be in, because they’re going to lose it. The court’s taking it over. The court can now declare anything it wants to as unconstitutional, and people are not going to have much protection when the federal government marches into their state.”

Get this book, before it really is too late.

4 Comments on Supreme Court a Danger to Nation