Author Saint John Hunt sets the record straight on a few major conspiracies that occurred in the late 20th century, including the infamous Watergate scandal as well as the assassination of his mother, Dorothy, who was a high-level spy in the Central Intelligence Agency and had access to national secrets that may have cost her life.

It’s a plot made just for the movies: Unbeknownst to you, both of your parents are spies. You move around the world every few years to exotic locales, live in mansions appointed with servants, attend private schools, and money is never a problem. Your parents get sucked into a scheme that involves the most powerful man in the world, leading to everything you know and love unraveling and crashing apart. Your mother is killed in a suspicious plane crash, and your father is sent to prison.

It may sound like one of Hollywood’s more preposterous plots, but it’s not. This is what really happened to Saint John Hunt, son of E. Howard Hunt, the man who engineered the break-in at the headquarters of the Democratic National Committee (DNC) on the sixth floor of the Watergate Hotel and Office Building.

Hunt, the author of Bond of Secrecy: My Life with CIA Spy and Watergate Conspirator E. Howard Hunt, has a new book out, this time about his mother, called Dorothy: The Murder of E. Howard Hunt’s Wife—Watergate’s Darkest Secret. AMERICAN FREE PRESS sat down with Saint John to discuss his new book. 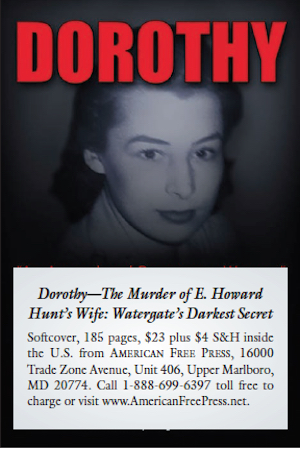 “My father and mother were both in the OSS in a very early point in the OSS’s history,” he began.

The OSS, Office of Strategic Services, was a World War II intelligence agency created to conduct espionage activities behind enemy lines, employing propaganda and subversion. It was the predecessor to the CIA.

“When the OSS disbanded after World War II,” he continued, “[my father] joined up right away with the fledgling Central Intelligence Agency.”

“My mother was in OSS briefly,” he told AFP. “It was in 1944, and she had been stationed at Bern, Switzerland. Her boss was Allen Dulles, who was station chief in Bern. She worked under Operation Safe Haven, and the object of that office was to track Nazi gold across Europe, art objects, the things they had stolen and looted.”

Although Saint John’s first book details how his father rose through the ranks of the CIA to mastermind the “successful” 1954 Guatemala coup and the “failed” Bay of Pigs invasion, his new book focuses on his mother and her fateful involvement in the Watergate scandal.

“My father stayed with the CIA for 27 years and upon his false retirement in 1970 he joined up with the Nixon White House,” he explained.

“Nixon was looking for an intelligence gathering group of men he could rely on to undertake whatever operations he thought would benefit his reelection.”

Saint John’s father put together a team with some of the Cuban exiles who were involved in the Bay of Pigs fiasco, and on Saturday, June 17, 1972, five of them were arrested breaking and entering into DNC headquarters at Watergate. The trail led back to E. Howard Hunt.

“My father and my mother were called blackmailers,” Saint John explained, “because they were demanding large amounts of money, hundreds of thousands of dollars, not only to keep quiet but to help support the families of the Cubans who had been arrested, and also to keep them quiet. This went fine for a while, but when Nixon got re-elected he wasn’t quite so worried anymore, and the flow of money stopped.”

Abandoned by the White House after Nixon promised clemency and under intense pressure to protect themselves and their family, Saint John’s mother decided to take evidence her husband had on Nixon’s misdeeds and call a press conference. On Dec. 8, 1972, she boarded United Airlines Flight 553 in D.C. to Chicago, but never made it there. The plane crashed.

“The press conference never happened,” said Saint John. “The plane crashed and the National Transportation Safety Board ruled it was pilot error. But there were many, many, many suspicious things about that plane crash that just did not add up.”

Saint John believes the plane was brought down on purpose.

“All our phones had been bugged for a couple months by that point, and we were being followed everywhere,” Saint John told AFP. “They knew my mother had called the White House and made a direct threat to ‘blow the White House out of the water,’ and my father backed that threat up.”

For those students of American politics in general and Watergate in particular, this book—and his earlier one—are must-reads.