News of Herndon’s August 11 scientific paper being published in the International Journal of Environmental Research was reported recently in AMERICAN FREE PRESS, since that article was the first paper of its kind on this sensitive subject ever to have appeared in a peer-reviewed journal.

That journal on September 2 suddenly retracted the latest paper, in what Herndon sees as political push-back from behind the scenes, regarding the paper’s revelation of chemtrails’ existence, their apparent atmospheric contents, and their possible effects on human health.

Chemtrails are those long cloud-like streaks and sheets which somewhat resemble jet exhaust but are sprayed in a manner that produces crisscross patterns in the sky, sometimes resulting in an unnatural whitish haze.

The official retraction statement from the journal’s editorial board mainly claims that the August 11 paper’s stated aluminum value, regarding leachate concentration, was seen as “incorrect,” and that this error allegedly invalidates the conclusions of Herndon’s paper.

But Herndon says that this one error, which he admits occurred, was blown out of proportion and does not invalidate the paper’s overall conclusions. At press-time he was in the process of formally contesting the basis of the retraction. In its retraction the journal also took exception with what it saw as an unscientific tone, in terms of how Herndon’s paper was worded.

Concerning a substance known to be particularly hazardous, his paper states that coal fly ash, a byproduct of coal burning, is the most likely substance being sprayed into the atmosphere, including the lower troposphere which people breathe, as part of an apparently deliberate geo-engineering policy thought to be geared toward fighting “global warming” and weather modification.

In the spirit of free inquiry, AFP sought to report about, not suppress, Herndon’s paper when it first came out and will continue following the story. Read on below for the rest of AFP’s initial summation of the paper.

A respected peer-reviewed scientific journal has boldly published the groundbreaking research of a noted San Diego geoscientist about “chemtrails,” shedding important new light on the murky subject by identifying a particularly hazardous substance being sprayed into the atmosphere.

Dr. J. Marvin Herndon’s paper in the International Journal of Environmental Research and Public Health reveals that this substance is coal fly ash, a byproduct of coal burning. 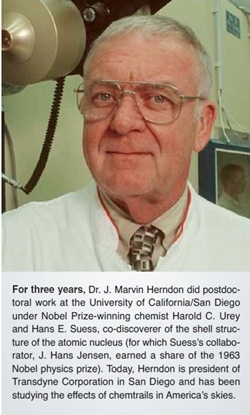 Coal fly ash is comprised of micron and sub-micron particles that would go up the smokestack unless captured and stored. Because of its adverse environmental health effects, Western nations now require coal-combustion fly ash to be captured and stored.

His paper, entitled “Evidence of Coal Fly Ash Toxic Chemical Geoengineering in the Troposphere: Consequences for Public Health,” should bring much-needed visibility and legitimacy to chemtrails, a subject that’s still unknown to most citizens. The paper vindicates other researchers and activists who’ve been laboring to call attention to those strange cloud-like streaks crisscrossing our skies and their potential dangers.*

“There’s nothing in the scientific literature that I’ve been able to find on this subject,” Herndon told AMERICAN FREE PRESS August 25. “As far as legitimate scientific papers, there appear to be none”—regarding what his paper calls “the intentional and increasingly frequent chemical emplacement [spraying] in the troposphere.”

Herndon, who wrote one earlier peer-reviewed paper concerning aerial spraying affecting India, stressed that his latest paper, published August 11, 2015, is based on much more thorough research representing a “quantum leap” on the subject. His research showed that the use of coal fly ash could lead to class-action lawsuits over its adverse health effects. Furthermore, secretive chemtrails operations could be fully exposed.

Geoengineering is nothing new. Cloud seeding to make rain has been around for decades. Herndon’s paper remarks: “The recent calls for open discussion of climate control or geoengineering tend to obscure the fact that the world’s military and civilian sectors have modified atmospheric conditions for many decades.”

What’s new is Herndon’s research-based evidence that “toxic coal-combustion fly ash” is the chief ingredient in aerosols “being sprayed by tanker-jets for geoengineering, weather-modification and climate-modification purposes,” his paper states.

“The consequences on public health are profound, including exposure to a variety of toxic heavy metals, radioactive elements, and neurologically implicated chemically mobile aluminum released by body moisture after inhalation or through transdermal (skin) induction,” he added.

Herndon’s methodology consisted of analyzing eight elements in rainwater, leached from aerosolized particulates. The findings were compared with the results of leaching the same elements from coal fly ash into water in a lab setting. He also looked at 14 elements in dust trapped with a high-efficiency particulate matter (HEPA) filter in an air purifier operated outdoors. The corresponding elements in un-leached coal fly-ash material were then compared with those 14 elements.

Aluminum is abundant in the Earth’s crust but is normally immobile. Herndon’s paper notes its toxicity when it becomes “mobilized” via spraying.

“It is a matter of grave concern that aluminum in a chemically mobile form can be readily extracted from coal fly ash with rainwater or [in contact with] bodily fluids,” he wrote. “Aluminum is implicated in such neurological diseases as autism spectrum disorder, Alzheimer’s disease, Parkinson’s disease and attention deficit hyperactivity disorder, all of which have markedly increased in recent years. Aluminum is thought to impair fertility in men and is also implicated in neurological disorders of bees and other creatures.”

Herndon, who’s calling for more research along these lines, told AFP he’s astounded that atmospheric spraying is being done at all, secretly no less, when no one has fully nailed down its short- and long-term health effects.

Geo-engineering researchers deceptively talk as if atmospheric chemical spraying is some futuristic scenario involving spraying in the stratosphere, or upper atmosphere, where the dispersed materials would remain suspended for long time periods and not adversely affect humans and other life forms.

“But it’s happening now, in the troposphere [lower atmosphere], which mixes with the air we breathe,” said Herndon.

He has observed firsthand that the “chemtrailed” material does not remain in the troposphere and must be frequently replenished. Moreover, ultrafine coal fly ash “is readily entrained in terminal airways and . . . retained in the lungs for long periods of time; the small grain-size enables it to . . . reach deep within the airways where it can cause inflammation and pulmonary injury.”

His paper adds: “If in fact some instances of neurological diseases are related to weather-modification activities during the last two decades involving the tropospheric coal fly-ash aerosols, then the recent ramp-up in tanker-jet spraying, as witnessed by this author [Herndon] in San Diego, will likely cause a sharp spike in their occurrence. . . . Epidemiological investigations of wide-ranging scope, including for example childhood and elderly disorders and birth defects, may begin to shed light on the human toll extracted by spraying coal fly ash into the troposphere.”

Herndon added that the “near-daily intense aerial spraying over San Diego” he has witnessed appears to be part of a multinational program that has been observed for a number of years in United States, Canada, Europe, Australia and New Zealand but is “never acknowledged publicly by officials.” Given the absence of disclosure and public consent “it is difficult to know the underlying motivations and the range of specific activities involved.”

Herndon summarizes: “In addition to preventing water droplets from coalescing and growing large enough to fall to Earth, coal fly ash . . . will hydrate, trapping additional moisture, thus further acting to prevent rainfall. That may cause drought in some areas, floods in others, crop failure, forest die-offs and adverse ecological impacts.”

The grand irony is that if curbing global warming is a goal of aerial spraying, Herndon has identified reasons why the process actually could exacerbate global warming.

AFP Roving Editor Mark Anderson is a veteran reporter who covers the annual Bilderberg meetings and is chairman of AFP’s new America First Action Committee, designed to involve AFP readers in focusing intensely on Congress to enact key changes, including monetary reform and a pullback of the warfare state. He and his wife Angie often work together on news projects.