What is the likelihood that Democratic presidential contender Hillary Clinton could end up behind bars for storing top-secret files on her own personal computer server in her home? If Federal Bureau of Investigation investigators uncover evidence of criminal wrongdoing in Mrs. Clinton’s use of the private email server to send classified government material, could the charges force her out of the 2016 presidential race? If so, what type of turmoil would this move create within the Democratic Party, especially in terms of finding a new candidate to replace her? If a host of other scandals surrounding the Clintons are exposed, could this pile even more trouble onto this precarious situation?

Jamison Faught of the Muskogee, Oklahoma Tea Party thinks so. During an August 13 interview, Faught told AMERICAN FREE PRESS: “If Hillary is forced out it’ll be chaos in the party, possibly even leading to a brokered convention next summer. Honestly, though, I don’t think Clinton will drop out unless she’s carried away in handcuffs.”

Faught continued: “The Democrats are definitely scared. In 2008, Hillary was their anointed candidate, the one expected to be their nominee. But she’s more vulnerable now than seven years ago, and it’s not just because of all the unanswered questions surrounding issues like Benghazi. People simply don’t trust her, and the Democrats know it. That’s why they’re searching for someone without all the baggage.”

Amid a plethora of rumors as to who might jump into the race, Faught assessed: “If you look at all the names being mentioned to potentially replace Hillary, you have Joe Biden, Al Gore, John Kerry and even [California] Governor Jerry Brown. Democrats keep looking back into the past. They don’t have any fresh faces or new ideas.” 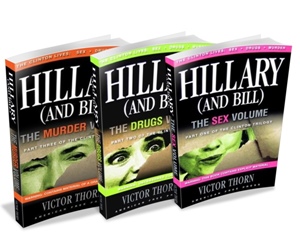 As to the diminishing number of liberals who support Mrs. Clinton, Faught observed: “The only ones still on board are those with a blind loyalty to the Clintons or the Democratic machine. They favor her over the safety of our country. If anyone else would have put that much sensitive information out there, they’d be sitting in jail right now. How could anyone look at Hillary and think she’d make our country better?”

Other crushing scandals could also undermine the Clintons. Well-known author and liberal feminist Camille Paglia recently compared Bill Clinton to comedian Bill Cosby. To date, 35 women have accused Cosby of drugging and raping them. Kathleen Willey, who Clinton sexually assaulted in the Oval Office on November 29, 1993, following her husband’s suicide, recently launched a website that encourages women victimized by Clinton’s predatory behavior to step forward. If dozens of women band together as they have against Cosby, the Clintons would face a rash of negative publicity.

Former Washington Post investigative journalist Ronald Kessler claimed on July 29 that not only is Bill still philandering, but “[their marriage] is a business relationship. It’s not a marriage at all. It’s a total fake, like everything else about Hillary. It’s just a big show and a scam.”

On July 28, in an interview with the UK’s Daily Mail Online, Linda Tripp, the woman who exposed Bill’s affair with Monica Lewinsky, stated: “His political success was largely dependent on Hillary. He owed her a great deal. As is widely acknowledged, Hillary took care of all the ‘bimbo eruptions,’ of which there were thousands, in order to present to the world an electable candidate. In this endeavor she was ruthless. She destroyed women so that their stories never saw the light of day.”

In regard to Hillary’s honesty, or lack thereof, Tripp announced: “I watched her on countless occasions blatantly lie to the American people. This was not a mistake or error or even spin. This was pure manipulation of the truth.”