• Resurgence of nationalism across globe could herald new era of freedom.

For 100 years and more, the political elites and secret string-pullers of government were happy to have the intellectually myopic masses of the doltocracy voting and marching behind them into the New World Order (NWO). But no more.

In country after country, the populace is awakening to the elites’ open assault on traditions, history, and values—upon Western civilization. Leading the advance toward tyranny, the chattering classes of corrupt politicians and simpering, servile pundits felt confident of their strength. But faced with the peaceful anger of nationalists and populists, our “betters” have decided democratic voting isn’t so swell.

For centuries, the culture destroyers have chipped away at the foundations of Christian and white civilization. They have used and abused us at every level. Now that a significant number of people are awake to the reality in America and abroad and seek to break the cycle of abuse, the internationalist cabals have panicked and become increasingly extreme—and just plain nutty—in their efforts to maintain control.

James Traub is a contributing editor of Foreign Policy and member of the Council on Foreign Relations (CFR). Following the Brexit vote, Traub penned a commentary for Foreign Policy titled, “It’s Time for the Elites to Rise Up Against the Ignorant Masses.” This cultural communist wants the phony “right” and “left,” which internationalists created for purposes of controlled opposition, to rejoin as “the sane vs. the mindlessly angry” and “to form a different kind of center, defending pragmatism, meliorism, technical knowledge, and effective governance.” Blah, blah, blah.

That’s right. You are a mindless animal to the plutocratic poohbahs. How dare you reject the wonderful, beneficent improvements brought by multicultural “diversity,” total globalization, loss of national identity, cultural and moral decay, and the impoverishment of the middle and working classes. You are, says Traub, “ignorant.”

Despite the huge numbers of young people seeking a return to tradition and the values that built Western civilization, Traub pushes the Big Lie that opponents of the NWO are just elderly whites angry at losing their comfortable past. Far from recognizing reality, he tries to create a false one. Yet, with faulty logic, he still wants nationalists to join up with the destructive globalist forces they oppose. Huh?

Across the Big Puddle, the nattering Belgian nabob, David Van Reybrouck, asserts, in a translation provided by The Guardian, that Brexit proves popular elections are dangerous to modern “democracy.” So long as people were apathetic but trusted the traitorous politicians, elections were great, he writes.

The Definitive Book on the New World Order! 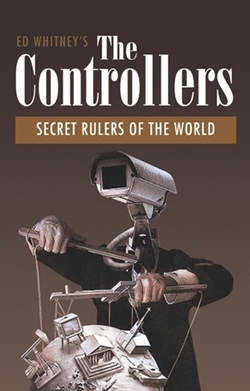 Now that they want to throw off the twin yokes of banksterism and bureaucratic globalism, popular “passion and distrust” must be deprived of a political voice. Citibank warns that likely referenda in Italy, Hungary, and elsewhere are highly “risky.”

Van Reybrouck shrieks that Brexit was unprecedented and allegedly destabilizing. So many laws will have to be changed, he frets. Forgetting the powerful, positive effects of popular referenda in 1930s Germany, Van Reybrouck wants to end all popular elections. Instead, tiny, “randomly selected,” tightly controlled and carefully propagandized focus groups would be permitted to advise the bureaucratic bullies and “vote” for the latest NWO nonsense.

Freedom’s “death by committee” would thereby be ensured. This is not just a European Union event, either. It is also well under way in the United States, as unelected regional planning councils—think “commissariats”—and “intergovernmental cooperation” committees are handed increasing control over the functions of governance. Trotskyite tyranny is what Van Reybrouck really wants.

Andy Serwer, Yahoo Inc.’s finance editor-in-chief, concurs. “We’re suffering the consequences of too much democracy,” he whines. Popular referenda, which 26 U.S. states permit, upset the financial pharaohs and loosened their stranglehold on the masses. At state and national levels, this is insufferable, he whimpers. Rather, we should just trust the politicians, lobbyists, and lawyers. They are the “experts,” apparently by the mere fact that we elected the politicians.

The NWO has been flanked by those it thought it controlled and is in momentary disarray before the nationalists and populists on two continents. The Establishment must not be permitted to rest or entrench.

The Rothschilds, Rockefellers, and Kissingers of the world—armchair generals all—hate us, our history, and our culture. They would enslave us or destroy us—no matter which.

Friends, it is you, your children, your homes, your religious faith and personal freedom, your nation and civilization that the internationalists despise and would subject to their diabolical dominion. They will not stop, so we must not.

Our battle cry must be “Pro aris et focis”—“For altars and hearths!” For God, country, and family! Raise the black flag. No retreat. No surrender. No quarter to the enemies of our Christian, European-American civilization. Victory lies not in the comfort of the present day. Ahead to victory.

As Thomas Paine wrote, “If there must be trouble, let it be in my day, that my child may have peace.”

7 Comments on People Rising Up Against the New World Order