Last month, the American arm of the Arabic news network Al Jazeera produced and ran on cable networks across the country, a 51-minute special program called The Day Israel attacked America, where they investigated “the shocking truth behind a deadly Israeli attack on a U.S. naval vessel,” the USS Liberty.

In it they produce audio tapes, never before broadcast, that prove Israel knew all along they were attacking an American ship. The program also shows how little the Israelis who planned and carried out the attack thought of their sole benefactor, savior and ally, the United States of America.

AMERICAN FREE PRESS readers are of course quite familiar with the background story of Liberty, which the documentary covers:

The seven reconnaissance flights prior to the attack occurred helped ID the vessel; the attacking planes were clearly Israeli, which made the Liberty crew feel secure; the American flag was flying, the Holiday Colors in fact, a huge American flag; it was a bright, clear, sunny day with the wind blowing; the Israelis jammed the Liberty’s distress frequencies, a violation of international law; the Israeli jets used napalm; Israeli torpedo boats were clearly marked with Stars of David, as they machine-gunned the Liberty’s life rafts using armor-piercing projectiles.

Al Jazeera also got their hands on real-time audio tapes, which are both informative and sickening, especially when one considers that these transmissions were made while men were dead and dying.

From one audio tape obtained by Al Jazeera, a pilot and the control tower discussed using napalm on Liberty with sexual innuendos:

Pilot: Does he screw her or not?

Control Tower: He goes down on her with low napalm.

In another, “the Israeli military argued about what should happen next and who should sink the Liberty,” again with ruthless and evil language.

Pilots and Control Tower: Let’s leave something for the Navy to do.

This program leaves little doubt “the Israeli Control Tower knew for certain this was an American ship.”

Pilot: What state does the ship belong to? 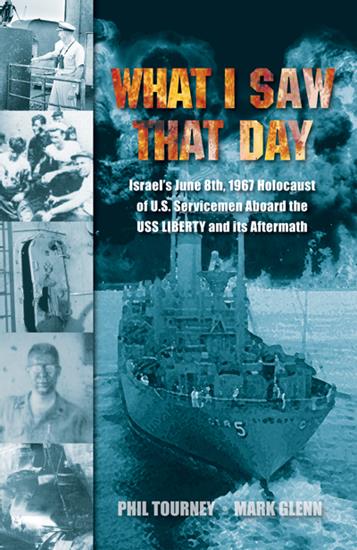 Besides the slaughter which left “body parts and blood streaming down the bulkheads,” perhaps the most revealing and some would say revolting part of the program was when American-Jewish influence was highlighted in the cover-up.

“As soon as the news reached Washington, the attack on the Liberty instantly triggered a domestic political crisis,” explained the narrator. “According to documents released under the Freedom of Information Act, one solution suggested in American government circles, was to sink the Liberty so journalists could not photograph it and inflame public opinion against the Israelis.”

Initially, President Lyndon B. Johnson briefed Newsweek magazine off-the-record that the Israelis had attacked Liberty because they thought it was an intelligence ship that was intercepting communications. When it was leaked that LBJ was Newsweek’s source, influential American Jews positioned deep within the U.S government, swung into action on the orders of the Israeli Embassy.

“Declassified Israeli documents show they were going to threaten President Johnson with blood libel, gross anti-Semitism,” reported the program. “And that would end his political career.”

Blood libel is an accusation that Jews kidnapped and murdered Christian children to use their blood as part of their religious rituals during Jewish holidays.

Several Liberty survivors as well as Admiral Bobby Ray Inman had a big part in the documentary.

“The Jewish community has always been more generous than many of their other counterparts in supporting, financially, elections, political causes, and in the process, that does translate into influence,” explained Inman.

“Around the time of the attack,” the program pointed out, “The Washington Post had noted that the ‘Jewish lobby’ could help determine the outcome of 169 of the 270 electoral votes needed to win the White House.”

“Many of Johnson’s closest friends and advisors were pro-Israeli, and they reported back to Tel Aviv on his every move,” reported the program, using code names to protect the identity of their White House agents.

“The strategy worked,” explained the documentary. “The U.S.-Israeli relationship proved to be stronger than the killing and injuring of more than 200 Americans.”

“The crucial intelligence,” explained the program, “came from Goldberg, who “warned Tel Aviv that the U.S. had the audio tape which revealed Israeli pilots knew it was an American ship before they attacked. The tape was quietly buried.”

With LBJ controlled, Israel’s American-Jewish spies turned their sights to the Liberty inquiries.

“Israeli tactics were clever. They identified Johnson’s soft spot, the war in Vietnam, and gave him two extraordinary gifts, neither of which was made public at the time.”

The first, influential U.S. Jews softened their criticism of the Vietnam war, which was a thorn in Johnson’s side. And second, with no effort at all, the Israelis captured Egyptian surface-to-air missiles, the same ones used by the North Vietnamese to bring down U.S. aircraft, including the launchers and maintenance manuals, and delivered them to LBJ.

“So grateful was the American government,” explained the documentary, “that they gave two gifts in return: they resupplied them with the weapons they had just lost in the war, and the Liberty inquiry run by the Department of Defense was watered down.” This impacted the U.S. Navy inquiry as well.