A provocative new book, titled America Nuked on 9-11: Compliments of the CIA, the Neocons in the DoD & the Mossad, by Dr. James Fetzer and a half dozen other contributors appears to have solved the problem of what exactly happened on that infamous Sept. 11 day, including who was responsible, how it was done, and why.

The new book, America Nuked on 9-11: Compliments of the CIA, the Neocons in the DoD & the Mossad, by Dr. James Fetzer is so thorough, so comprehensive and so detailed that any future research on 9-11 has to begin here. Nothing else comes remotely close. 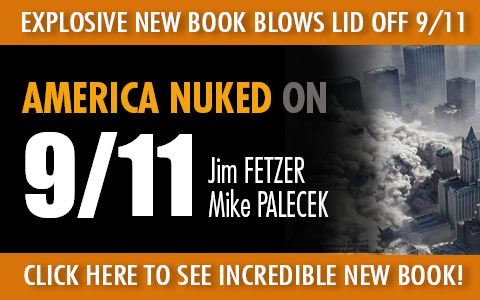 America Nuked on 9-11 is divided into 28 chapters, with eight core sections of three chapters each that, in reverse order, focus upon “The Myth of Nano-thermite,” “The 9-11 Crash Sites,” “The Pentagon: What Didn’t Happen,” “New York was Nuked on 9-11,” “What Happened on 9-11,” and “9-11: Who Was Responsible and Why,” Parts I and II. It has a  preface and a prologue as well as an epilogue and an afterword with an index.

In relation to nano-thermite, for example, three chapters by T. Mark Hightower, who is a chemical engineer, explain that it is a law of materials science that, in order for an explosive to blow apart a material, it must have a detonation velocity equal to or greater than the speed of sound in that material. Looking at it from this perspective, nano-thermite can’t cut it.

An irony of 9-11 research is that the nano-thermite theory was inspired by dust samples from an apartment near Ground Zero. But the far more comprehensive dust studies of the U.S. Geological Survey revealed a host of elements that would not have been present in the quantities and correlations found had this not been a nuclear event, including barium and strontium, thorium and uranium, lithium, lanthanum, yttrium, chromium and tritium.

That the buildings were blown apart in every direction from the top down and were in large measure converted into millions of cubic yards of very fine dust confirms the hypothesis. It is also supported by the medical maladies incurred by the first responders and residents in the area. Recent estimates have placed the number affected at close to 70,000.

The book is thorough and painstaking on who was responsible and why, where the scheme for 9-11 appears to have originated in the fertile imagination of Benjamin Netanyahu, who wanted to devise a plan to use the U.S. military to take out the enemies of Israel—and found a brilliant solution involving collaboration between the CIA, the neocons in the Department of Defense, and the Mossad.

Fetzer contends that 9-11 was produced by the neocons in the Project for a New American Century, who believed that the American people might be slow to appreciate the unique opportunity presented by the demise of the Soviet Union.

They envisioned the creation of an American empire spanning the world if only the U.S. would move aggressively into the Middle East and exert diplomatic and military pressure outward from the geo-politically sensitive region.

AFP however does not endorse the fact that in this book Fetzer criticizes other diligent researchers, including Dr. Judy Wood and Architects and Engineers for 9-11 Truth. It is our opinion that such attacks only fracture the unity of those groups who are willing to work together to solve the Sept. 11 crimes. That being said, the book does offer well-researched theories and commentaries from some high-powered academics on 9-11 and is certainly worth looking at very closely.