Few would deny that predatory bankers have been feeding off the blood and treasure of the American people for far too long. So what’s being done about it? Though many have stepped forward proposing ways to break free from this century-old system of debt slavery, perhaps no one has worked harder or come closer to an infallible escape plan than Stephen Zarlenga of the American Monetary Institute (AMI).

From Oct. 2-5, AMI will host its 10th Annual AMI Monetary Reform Conference at University Center in downtown Chicago. There Zarlenga, author of the magnum opus The Lost Science of Money, has assembled some of the greatest economic minds from around the globe, who will once again tackle our nation’s increasingly volatile financial woes with realistic and achievable solutions.

To learn more, this AMERICAN FREE PRESS reporter reached out to Zarlenga and asked how he and his colleagues plan to repair this broken economy.

“Congress already had the solution hand delivered to them a few years ago,” he replied. “Our work now is getting them to put it into action.”

According to Zarlenga, the solution he has helped champion can be found in the text of the National Emergency Employment Defense Act (NEED), a bill that was introduced by former Representative Dennis John Kucinich (D-Ohio) in 2011.

“All the components for monetary reform can be found in that bill,” Zarlenga said. “It essentially accomplishes three things: nationalizes the Federal Reserve, prohibits banks from deciding what we use for money and returns that power to Congress, which creates new U.S. money and spends it into circulation for the common good: infrastructure, health care and education.”

Though Congress failed to act on this legislation when it was first proposed, Zarlenga said it still stands as a matter of record in our nation’s documents and can be re-introduced at a later time.

“We need to create intelligent pressure on our representatives and senators to make this happen,” he stressed. 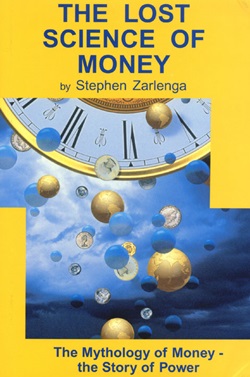 THE LOST SCIENCE of MONEY

Stephen Zarlenga’s The Lost Science of Money, traces the money power through three-and-a-half millennia from barter to the euro.

This book draws fascinating, previously lost monetary principles from ancient Greece and Rome, from the experience of the Moslems, Venice, the Templars, the Jews, the Bank of Amsterdam and the Bank of England, plus the Federal Reserve System.

The book also shows that the question of usury is far from settled, and that monetary reform is more a matter of morality and law than of economics, and also demonstrates that a good money system must be based in law, not in commodities, as well as defining the essential elements needed to remove structural injustice from our money system.

Zarlenga went on to say that the current fractional reserve system, which allows banks to create money out of debt, needs to be scrapped and replaced with one that’s based on a concept of money that can be traced back to ancient Greece.

“Aristotle summarized it in one sentence: ‘Money exists not by nature but by law,’” Zarlenga said. “In other words, money is not something that comes from a farm or out of a mine. It’s an abstract legal creation, a fiat of the law that has fallen under the authority of government for most of the history of humanity.”

This system, of course, is at odds with many who claim that money only has value if backed by a tangible commodity. Zarlenga is no stranger to this argument and is quick to point out the flaws in this kind of reasoning.

“Trading in gold or other ‘stuff’ is not money, it’s barter,” he said. “In that system, whoever has the goods controls the economy. That’s how these bankers were able to achieve this monopolizing power, because they were the ones who had access to the gold.”

With AMI’s reforms, bankers would be removed from the driver’s seat and replaced them with a “Monetary Authority,” which would be empowered to monitor the new system on behalf of the people and ensure that it never becomes inflationary or deflationary.

“The greater danger is deflation because it stops people from working,” Zarlenga said. “What gives money value are the millions who work in a supportive legal and social structure and create the things that are essential to our daily lives.”

When asked what effect these new reforms would have on the nation’s outstanding debt, Zarlenga replied: “We would pay off our financial obligations as they come due, if necessary by creating the money to cover it. But we would no longer roll it over with more borrowing, which is what we’re doing now.”

Additionally, Zarlenga said that AMI’s reforms would limit interest rates to 8%, end compound interest (with the rule that total interest never exceeds the principal, except on mortgages) and allow the 50 states to decide where 25% of the new money goes each year through per capita federal grants.

This year’s Monetary Reform Conference will reinforce the need to put these proposals into action as well as addressing developing concerns, such as the student debt crisis, teachers’ salaries and the challenges faced in convincing European nations to abandon their destructive austerity practices.

“We’re not short on experts or solutions,” said Zarlenga. “What we need now is support. That’s why we rely on people like your readers at AMERICAN FREE PRESS. They know what’s wrong, what needs to change, and they’re not afraid to pressure their politicians into setting this thing in motion.”

Keith Johnson is a writer based in Tennessee.