This writer interviewed John McAfee twice on my “I Protest” radio program. McAfee was a throwback to the Wild West era—a swashbuckling, whiskey-drinking, unfiltered-cigarette-smoking alpha male still full of testosterone at age 75. He was also perhaps the wealthiest critic of America’s corrupt and rigged system one could ever find.

McAfee allegedly killed himself in a Spanish prison on June 23, only hours after a court approved his extradition back to the United States, where tax-related criminal charges could have resulted in a draconian 30-year sentence. McAfee had already joked about this, tweeting on Nov. 30, 2019, that he was “getting subtle messages from U.S. officials saying, in effect: ‘We’re coming for you McAfee! We’re going to kill yourself.’ I got a tattoo today just in case. If I suicide myself, I didn’t. I was whacked. Check my right arm.” The tattoo that was referred to read “$Whackd.” McAfee, who made a huge fortune with his anti-virus software, was a Libertarian who was rumored to be thinking of running for president again.

McAfee regularly blasted the U.S. government, and was especially skeptical of the Covid pandemic narrative and the unconstitutional lockdowns. He had been rumored, for a few years, to be planning on starting a website that focused on exposing official corruption. McAfee was an aficionado of crypto-currency, and the government seems to believe he was hiding a huge amount of it somewhere.

A haunting tweet, alleged to have been sent by McAfee on June 8, read, “If anything ever happens to me, please know that the 31 TB [terabytes] of files I have are located on hard drives in my condo near 88th Street and Collins Avenue just north of Miami Beach.”  That happened to be the address of the Surfside, Fla. condo building that inexplicably collapsed on June 24, the day after McAfee’s alleged suicide. The mainstream media has predictably assured the public that the McAfee tweet was “fake.” This writer is still attempting to contact McAfee’s wife regarding this.

McAfee boldly claimed he “could bring down the U.S. government.” Also on June 8, McAfee tweeted that he was in possession of data that would prove major corruption at all levels of government. He threatened to release the information unless the government stopped harassing him. McAfee declared, “I’ve collected files on corruption in governments. For the first time, I’m naming names and specifics. I’ll begin with a corrupt CIA agent and two Bahamian officials. Coming today. If I’m arrested or disappear, 31+ terabytes of incriminating data will be released to the press.”

McAfee’s purported suicide brought back memories of billionaire underage sex trafficker Jeffrey Epstein, on Aug. 10, 2019. Like McAfee, Epstein was behind bars at the time. Virtually  no one except the authorities who “investigated” it believed that he had taken his own life.

Last month, the prison guards who incomprehensibly failed to notice anything amiss in Epstein’s cell received a sweetheart, deferred prosecution deal. Deborah Jeane Palfrey, the “D.C. Madam” whose clientele book threatened to rock the political world, famously said on air that she’d never kill herself. Shortly thereafter, she was found hanged. The American political landscape is littered with the bodies of the Epsteins, the Palfreys, and the McAfees. Unnatural deaths are an essential part of the tyranny that has engulfed this country.

In a May 10, 2020 interview, McAfee told this author that he was becoming more and more skeptical of the Covid-19 narrative. “The more I crunch the numbers,” he stated, “the more ridiculous they seem.” He spoke of getting into an argument with the establishment apologia website Snopes regarding these numbers. McAfee had researched this subject seriously, as he mentioned the CDC directives to hospitals to list the cause of death as Covid-19 regardless of testing, and the powerful financial incentives hospitals received to issue diagnoses and put patients on ventilators.

“Give me the legal basis for making people lock down.” McAfee declared. “Show me what the law is.” The maverick software icon contrasted how the Chinese were working and producing, while Americans sat idle like “jelly.” 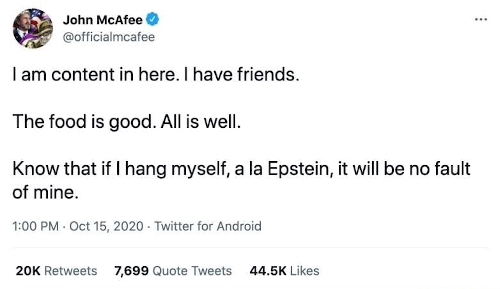 “Know that if I hang myself, a la Epstein, it will be no fault of mine,” McAfee tweeted last Oct. 15.

He told a Spanish court last month that “the U.S. government wants to make an example of me.” McAfee’s attorney Javier Villalba vowed to get “to the bottom” of his client’s death. “At no point had he shown any special worry or clue that could let us think this could have happened. . . . Nobody expected it. He had not said goodbye.” McAfee’s wife Janice stated that her husband was not suicidal and did indeed fear he would be killed. “I blame the U.S. authorities for this tragedy: Because of these politically motivated charges against him, my husband is now dead,” she said.