Get the book that everyone’s talking about . . .

and for $5 off the retail price!

It’s bad enough to get caught and indicted for a crime you actually committed. A criminal can have no greater fear than that of getting captured. But here is the true story of a law-abiding, innocent man being kidnapped off the streets of Kansas City by plain-clothed badge-wearers and jailed and hauled a thousand miles away to face trial for a created “non-crime” crafted by clever federal agents and the Department of Justice.

Pat Shannan tells first-hand as never before of the targeting, robbing, jailing and trying of William Bicket that resulted in a miracle that few persecuted by the system will ever get to see. Here is the story from inside the Atlanta Federal Prison and federal courtroom as can be told by no one else. Everyone agrees: no book like this has ever been written. It’s one of a kind. This is the true story of a modern-day Goliath going down to the slingshot of David. 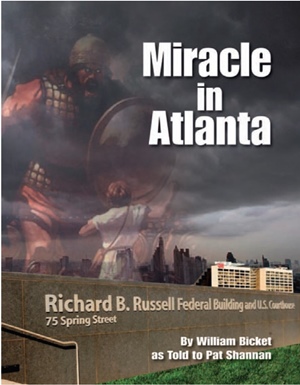 There is only one avenue of escape when you’ve been targeted, and few in this day and time will ever discover, let alone trust it enough to use it. Miracle in Atlanta is not a religious book, but the miracle was produced by faith in God alone. This is not a book offering legal advice, but rather more of what not to do when caught in the federal trap.

And it has an extra added attraction: On page 42, Pat comes out of the closet after nearly a quarter century! (No, it’s not what you may be thinking!)