• Survivors, supporters meet in Arizona to honor the fallen.

MARICOPA, Ariz.—Hidden in the middle of the Sonoran Desert, surrounded by mountain ranges, the only city in the nation bordered by two Native American communities hosted USS Liberty survivors and supporters from all across the country, who converged on this city to honor the fallen from Israel’s attack on the intelligence vessel 49 years ago this week.

Liberty survivors Don Pageler, Ron Kukal and Larry Thorn read a list of the 34 murdered by the Zionist state during the so-called Six-Day War, in which Israel launched a sneak attack on Egypt, Syria and Jordan, while lying to diplomats, politicians and the media that the Arab states were the aggressors.

Pageler travelled from California, Kukal from Wyoming and Thorn from Mexico. The other Liberty survivor in attendance was the only three-time president of the USS Liberty Veterans Association Phil Tourney.

Also in attendance were former sailors from other vessels that assisted the Liberty when help finally arrived almost 18 hours later. George Sokol, who organized the event, and Mike McCarthy represented the aircraft  carrier USS America and John Nuss, who served aboard the USS Saratoga, the only vessel to receive Liberty’s SOS, was also present. 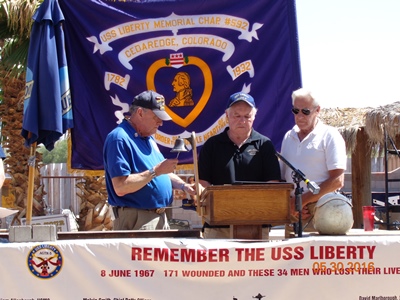 While in international waters collecting electronic communications during Israel’s land grab, primarily to eavesdrop on whether Soviet pilots were directly assisting their Arab client states, the Liberty was surveilled by the Jewish state for eight hours on the morning of June 8, 1967, then viciously attacked by unmarked jet aircraft, that fired rockets, cannons and dropped napalm for almost 30 minutes, leaving almost 1,000 holes in the former WWII cargo vessel and slaughtering nine Americans.

The air attack was quickly followed by a seaborne assault by three motor torpedo boats (MTBs), which launched five torpedoes and fired armor-piercing rounds at close range to breach the Liberty’s skin to hit the boiler, which would be catastrophic for the ship. One torpedo hit the spaces that housed the sailors, Marines and civilians working for the NSA, and 25 were instantly killed. The MTBs also, in violation of the Geneva Convention, machine-gunned all the life rafts and fired on sailors attempting to assist the wounded and put out fires.

Battle carrier groups conducting maneuvers off the coast of Crete launched aircraft to defend the Liberty, but the planes were twice recalled by Secretary of Defense McNamara and President Johnson, who commented that he would rather see the Liberty sunk than embarrass his ally Israel. If aid would have been allowed to reach the Liberty, only nine, not 34, young men would have perished in the assault that lasted longer than the Japanese attack on Pearl Harbor.

Israel eventually admitted responsibility, but claimed it was a case of mistaken identity, which treasonous U.S. politicians quickly accepted, even in the face of the mountains of evidence that proves the attack was clearly premeditated murder. To date, this is the only major maritime incident in the history of our nation not afforded a congressional investigation.