• A cracked gravestone in a Jewish cemetery draws howls of international outrage, but none of these attacks have received U.S. news coverage.

Even as the Zionists in Palestine bombarded the Gaza Strip, another form of Zionist aggression drew less attention—the continuing Zionist war against Christianity.


“This abominable book galvanized the murder of millions of Jews during the Inquisition and during auto–da–fé instances. Sending the book to MKs is a provocation. There is no doubt that this book and all it represents belongs in the garbage can of history.” 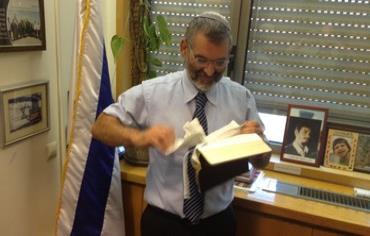 The Bible Ben-Ari destroyed was one of 120 Bibles sent to members of the Knesset by a Christian missionary group praying for their conversion.

Few Christians would say that receiving a Jewish Torah in the mail was a provocation, but other Knesset members shared Ben-Ari’s concern. Knesset member Tzipi Hotovely of Likud said that the distribution of such anti-Semitic hate literature as the New Testament would be investigated and prevented in the future.

Anti-Christian violence is on the rise in Palestine. According to Israeli daily newspaper Ha’aretz, a gang of 100 followers of Chabad-Lubavitch Yitzchak Ginsburgh have been linked to 24 attacks on Christian monasteries and churches across Palestine since 2009, including three since March. On May 9, 2014, the Romanian Orthodox Church in Jerusalem was defaced with the words “Jesus Is Garbage” and other spray-painted slogans. On May 5, 2014, “Death to Arabs and Christians” was painted on the Catholic Notre Dame Center in Jerusalem. On March 31, 2014 the words “Jesus Is A Monkey, Mary Is A Cow” were painted on the Deir Rafat Catholic monastery near the city of Beit Shemesh.

While a cracked gravestone in a Jewish cemetery usually draws howls of international outrage, none of these attacks have received American news coverage.

Judaism is a religion of anti-Christian hatred. According to the Talmud, Christians are Edomites, children of the Biblical Esau, and Jesus was a sorcerer who is boiling in pots of feces in hell.

Chabad-Lubavitch is one of the worst of the Jewish hate groups. It teaches that non-Jews are cattle who were given by YHWH to Noah to rule over as animals.

Bill White is a freelance journalist and publisher based in Florida. He has also written articles for THE BARNES REVIEW (TBR) magazine. You can write him at: William A. White 201400005514 Seminole County Jail 211 Bush Blvd Sanford FL 32773.