Benton L. Bradberry’s The Myth of German Villainy is a book about which this reviewer can absolutely say, “I wish I’d written it myself.” The other thing that can be said with certainty about The Myth of German Villainy is this: Every American patriot needs to read this book, particularly those who have—quite unsurprisingly—bought into a lot of the nonsense about 20th century history pawned off by the controlled media and bought-and-paid-for historians shilling for the New World Order elite. Much of their nonsense has managed to find its way even into the “alternative” media (particularly on the Internet) today.

A United States naval officer and aviator for 22 years with a degree in political science and international relations from the Naval Post Graduate School in Monterey, Bradberry has given readers a fast-moving, fascinating and well-written 440-page masterwork that accomplishes what few books can do. It deconstructs a complex and wide-ranging array of historical data (covering a broad expanse of time) and makes it accessible and interesting. More importantly, it explodes the lies and propaganda about the subject matter that has predominated in the mass media for what has now been several generations.

Scholarly—but nonetheless straightforward and easy to read—this is a comfortable book about many uncomfortable topics, precisely because it constitutes a comprehensive, head-on correction of the multiple historical distortions and outright lies that have accompanied standard “mainstream” and now even “alternative” writings on this subject.

And before more sensitive readers get too excited and sidetracked, let it be said right up front that The Myth of German Villainy is not a book about “the Holocaust” and whether it did—or didn’t—happen as New World Order-sponsored history books claim. Instead, this book focuses on the often-forgotten bigger picture: the perennial mischaracterization of Germany as the 20th century’s most audacious warmonger, an aggressive, armed colossus bent on conquest of Europe, if not the world itself.

While everyone today “knows”—having been told so repeatedly—that Germany under Adolf Hitler was the big, bad bully who started World War II, few remember (if they ever knew it in the first place) that the same people who decided Germany was guilty of causing the Second World War had also declared that Germany was responsible for provoking the First World War.

However, in The Myth of German Villainy, the author skillfully dissects a remarkable and complex conglomeration of diplomatic intrigue and global power politics at its highest and lowest order. He demonstrates, beyond any question, that Germany was the real victim of both World War I and World War II. Rather than being the instigator of war, Germany was instead the target of British aggression, precisely because the “new Germany” that arose under Hitler stood in direct challenge to the aims of imperial Britain, which had for all intents and purposes emerged as the global arm of the would-be world empire of the Rothschild banking family based in the City of London. 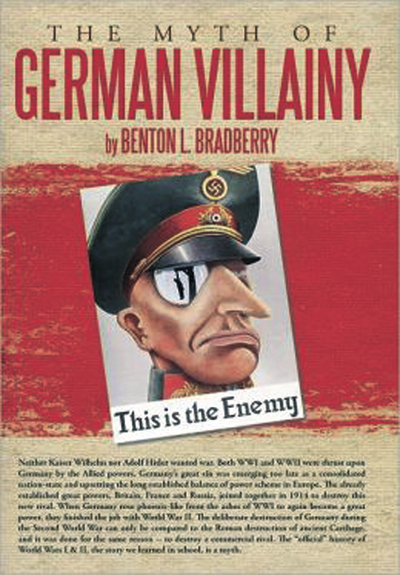 It’s all about money. And if you follow the money, it will take you right back to the international intrigues of the Rothschilds and their propagandists in the controlled media who have done so much to stilt the truths about history that Bradberry bends back into reality.

Among other things, the author accurately summarizes life in Germany under Hitler—the truth about which is far from the average depiction of a Gestapo-run tyranny, a popular (and quite mythical) image unfortunately perpetuated in a lot of “patriot” publications today.

Bradberry also delves into the ugly history of communism and how that failed system—at its pinnacle—was responsible for so much war and bloodshed that set the stage for Germany’s front-line challenge to this rampaging force that posed a direct challenge to the very survival of Western Christian Civilization.

There is much more that could be said about this wonderful book, but let this final point be noted: As an honest, objective primer on the long-hidden realities of 20th-century history as it relates to the events of both world wars—and their aftermath—you will search far and wide to find anything that does such a fine job in bringing history into accord with the facts.

Michael Collins Piper is an author, journalist, lecturer and radio show host. He has spoken in Russia, Malaysia, Iran, Abu Dhabi, Japan, Canada and the U.S.