Most people think of historians as quiet bookworms, squirreled away in corners of ancient libraries. Few recognize the more radical side of their profession, however, which for several decades has pushed various racial, social and political ideologies as the yardstick of historical interpretation.

Take, for example, the American Historical Association (AHA), the largest organization of professional historians in America. Claiming to “serve the interests of the entire discipline of history,” it also issues statements on everything from a jaywalking arrest to opposing Georgia’s Religious Freedom Restoration Act. Now, they have censored advertising for a new history book about the U.S.-Israeli “special relationship.”

Against Our Better Judgment: The Hidden History of How the U.S. Was Used to Create Israel is Alison Weir’s first book, 14 years in the making. In 2001, increasingly troubled by the Israeli-Palestinian conflict, she traveled alone to the occupied territories to learn firsthand the truth of events from the local people. What she discovered made clear that the Zionist-controlled mainstream media were lying to Americans, so she founded the organization, If Americans Knew, to make the truth more widely known. She is now also president of the Council for the National Interest, which promotes Middle East policies serving U.S., not foreign, interests.

On April 4, 2015, AMERICAN FREE PRESS spoke with Ms. Weir about her new book and the shocking experience that resulted when she attempted to place a paid advertisement for it in one of the publications of the AHA.

Against Our Better Judgment is a meticulously researched work, with hundreds of footnotes and numerous primary and reliable secondary sources—many of which are now out of print. A non-governmental organization rigorously checked the facts before publication and, although self-published, the book has been highly praised—even by former State Department officials.

The book tries to answer the question, “Why would Israel be considered an ally of the U.S.?” After all, notes Weir, it is a barren country with no natural resources to speak of. Surely the answer would be of historical interest to many, especially as a key to understanding the present conflict. As the author found out, the State Department actually long considered Israel a detriment to our national interests.

But Zionist Jews—some already or soon thereafter wealthy—organized massive fundraising and propaganda campaigns well before 1948. They deliberately co-opted Christians into their schemes and engaged in heavy-handed pressure tactics against non-Zionist Jews, the media and politicians. And after the illegal declaration of the state of Israel, the Zionists made sure Americans never learned about the widespread persecution and murder of Palestinian Christians or the destruction of Christian holy places.

One would think a paid advertisement for such a seminal book would be welcomed by the AHA, but they refused to accept it, without explanation. Ms. Weir’s follow-up inquiries led Dr. James Grossman, executive director of the AHA, to claim the book “does not fall within the scope of the mission of the AHA,” is “advocacy not scholarship” and was not “peer reviewed” or “reviewed by the mainstream press.”

Ms. Weir refuted these claims in an article on the website “Counterpunch,” pointing out that Grossman and the executive committee have not read the book. But they have advertised books and printed articles from “mainstream” sources that contained glaring errors, including writings about Israel. The objection of “self-publishing” from Grossman was turned back by proof the AHA previously advertised (page 19) Michael Swanson’s self-published The War State.

Ms. Weir even joined the AHA.

“I am very interested in history,” she told AFP. 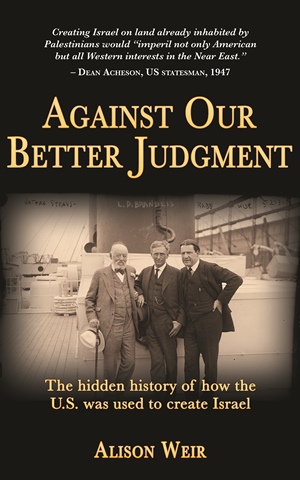 She began posting in AHA web forums about the advertising refusal. She received some “very thoughtful responses” from both sides. But Grossman himself posted a response she characterized as “rude” and “hostile.” Moreover, said Ms. Weir, the partisans of Israel “very quickly stoop to character assassination, rather than discussing the factual content.”

Ms. Weir characterized the advertising rejection as “very puzzling. I don’t think they have a valid reason for rejecting [it]. . . . In a way, it is a restraint of trade. Some people can sell their books, and some cannot.” She saw the decision as contrary to principles of free speech and academic freedom, restricting access to the “marketplace of ideas.” She said the “our journal/our decision” justification is a “ ‘might makes right’ argument” and is not “principled.”

AFP also attempted to interview Grossman. He was unavailable for a telephone interview but agreed to answer our written questions. However, his reply to nine questions about refusing advertising for Against Our Better Judgment was terse: “The AHA has no comment on these questions.” No summary of AHA’s view; no statement about academic freedom, free speech or restraint of trade in relationship to their decision and no defense against Ms. Weir’s incisive criticisms of their actions. There was also no answer as to what influence, if any, resulted from pro-Israel, pro-Jewish or anti-Palestinian bias or prejudice—although a disproportionate number of executive committee members appear to be Jewish based on their names.

For her part, Ms.Weir concludes that she believes it is important to have the facts from both sides about the U.S. and Israel versus Palestine.

“One thing that motivates my work is opposition to racism and discrimination,” she said. She points to a United Nations resolution calling Zionism a form of racism.

“Israel is based on discrimination,” she added.

Her goal—apparently not shared by the AHA—is to bring that truth to Americans, and to get the U.S. out of its destructive foreign entanglement with Israel.

Prior audio interviews with Alison Weir:

5 Comments on Historical Book on Israel Censored in U.S.