In March 2008, during a radio interview, Deborah Jeane Palfrey, otherwise known as the D.C. Madam, warned: “I’m not planning to commit suicide. I’m planning on going into court and defending myself vigorously and exposing the government.” In Palfrey’s possession were several “black books” that could have ended the careers of politicians and high-ranking officials by revealing their sexual liaisons with prostitutes. But less than two months later, on May 1, 2008, Ms. Palfrey was found dead in her mother’s storage shed in Tarpon Springs, Florida. The cause: an extremely suspicious “suicide” by hanging.

Between May 4 and May 14, political operative Roger Stone, author of the bestselling book The Clintons’ War on Women, told several interviewers: “If in a couple of weeks they tell you that I committed suicide because I was depressed, or if I get hit by a truck crossing the street, or if they tell you I was killed in a freak hunting accident, don’t believe it. Hillary Clinton’s the major perp and she needs to be exposed.” 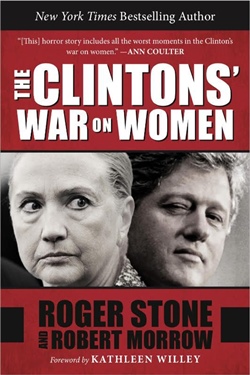 Stone explained his reasoning: “When women voters learn how Hillary has bullied and intimidated Bill Clinton’s various sexual assault victims, I don’t think there’s going to be a lot of sympathy for [her]. The idea that she’s been an advocate for women is completely bogus.” He continued: “Wait until you see the film version of The Clintons’ War on Women. Wait until you see the women themselves tell the story about how they were physically abused by Bill and then psychologically abused by Hillary. The only difference between Bill Cosby and Bill Clinton is Cosby drugged his victims. Bill preferred to physically overpower them. That was his m.o. This isn’t about indiscretions or marital infidelity or adultery or girlfriends. It’s about sexual assault and rape . . . It is Hillary Clinton who bullies and intimidates and degrades women after they’ve been abused by her husband.”

So that his intentions wouldn’t be misconstrued, Stone reiterated, “The Clintons have a record of savagely beating people.”

Robert Morrow, who coauthored The Clintons’ War on Women with Stone, agrees. During a May 18 interview, Morrow told AFP: “Roger Stone would be a perfect target, and, yes, I believe the Clintons are capable of committing crimes against him. Hillary Clinton knows that Stone and I, plus Victor Thorn, have written the definitive takedown books on them. If something happens to any of us, Bill and Hillary would be the first suspects.”

Their motive, according to Morrow, is obvious: “What happens to Hillary during the general election when Donald Trump starts throwing in her face all of the dirty, evil, nasty crimes that have been suppressed by the mainstream media? Hillary doesn’t want voters to learn about Bill’s serial sexual assaults and how she ran terror campaigns to silence his victims.”

Reinforcing his claims, Morrow continued: “The Clintons are thugs. As governor of Arkansas, Bill Clinton had an inner circle of state troopers that broke into Gennifer Flowers’s home on three separate occasions. Other henchmen left shotgun shells as a warning to Bill’s mistress, Sally Perdue. The Clintons will kill or beat people up if they pose a threat to them.”

Get the HILLARY (AND BILL) TRILOGY for 33% off the retail price plus FREE SHIPPING!

Murdered for the Truth?

• Knowing too much about bad things can get you killed

Many AMERICAN FREE PRESS readers still question the circumstances surrounding former congressman-turned-columnist Jim Traficant’s death on September 27, 2014. On the other hand, those familiar with how the game is played weren’t surprised that anomalies conflicted with the official story.

This same scenario dates back five decades to the dawn of modern conspiracy research and John Kennedy’s 1963 murder in Dallas.

Two years later, on November 8, 1965, journalist Dorothy Kilgallen was found dead in her bed of “acute ethanol and barbiturate intoxication.” She was fully dressed, her makeup and false eyelashes still intact.

Only weeks earlier Ms. Kilgallen had stated about the JFK conspiracy, “I’m going to break the real story and have the biggest scoop of the century.” Ms. Kilgallen never had that opportunity.

As many astute AFP readers know, to date, over 100 eyewitnesses and participants in the Kennedy assassination have suffered mysterious deaths. One of them was Jack Ruby, who claimed that he had been injected with cancer shortly before his passing on January 3, 1967.

On October 3, 1988, legendary conspiracy researcher Mae Brussell perished due to “fast onset cancer.” Brussell had been instrumental in shedding new light on not only JFK’s hit men, but also the assassination of Robert F. Kennedy, the Jonestown massacre, and the Charles Manson and the Zodiac killer murders.

Two years later, on July 11, 1990, Gary Caradori, Nebraska’s chief investigator into the notorious pedophile cover-up in Omaha known as the Franklin scandal, perished along with his son when a bomb took down their single-engine Piper Saratoga aircraft. Caradori had just met with associates in Chicago regarding pedophilerelated sexual photos that would have blown the case wide open.

A year later, investigative reporter Danny Casolaro was found dead in a West Virginia hotel bathtub on August 10, 1991, each of his wrists slashed 10-12 times. His brother insisted that Casolaro was so horrified of blood that he’d never choose such a mode of death. Casolaro had been trailing an international crime cabal that he labeled “The Octopus,” which included money launderers, politicians, and top-level drug dealers.

Another prominent writer, Jim Keith, broke new ground on topics ranging from mind control to the OKC bombing, UFOs, and bio-warfare. On September 7, 1991, while attending a festival in Nevada, Keith fell and broke his knee. While being transported to a local hospital, he lamented, “I have this feeling that if they put me under [with anesthesia] I’m not coming back.” Keith died hours later from what the coroner called “blunt force trauma.”

The September 11, 2001 terrorist attacks also took their toll on truth-seekers. William Cooper, who tied the Israelis to this plot, was shot dead in his Arizona driveway by sheriff deputies on November 5, 2001.

Author and researcher Philip Marshall was murdered on February 2, 2013 along with his two children and dog. All died via gunshot wounds to the head.

Could any of the killings be linked to the Bush crime family? At least one could.

On July 18, 2001, only months before the 9-11 attacks, author J.H. Hatfield was discovered dead from what was called a suicide-overdose. Hatfield had penned the blockbuster book on George W. Bush entitled Fortunate Son that became a New York Times bestseller, which exposed Bush’s youthful indiscretions, which included drug use, alcoholism, and womanizing.

On December 10, 2004, journalist Gary Webb, whose Dark Alliance series focused on Central Intelligence Agency cocaine trafficking, allegedly committed suicide by shooting himself in the head, twice. Then there’s Andrew Breitbart who boasted of a video that would sink Barack Hussein Obama’s 2012 reelection campaign. He died of a heart attack just before releasing the video. Lastly, Rolling Stone contributor Michael Hastings’s Mercedes car exploded into flames on June 18, 2013 after slamming into a tree. He died in the wreckage. He had been finalizing a piece on the National Security Agency surveillance state and its many abuses.

Risking Our Lives at Ground Zero

It was an historic day for the 9-11 truth movement when WING TV’s Lisa Guliani, along with Vincent Sammartino, Michael Langston, patriot Jim Kujawa, Nico Haupt, William Rodriguez, and a dozen other brave souls joined this writer at Ground Zero on September 11, 2005. Making this event even more memorable, for the first time ever at Ground Zero, we displayed a 14-foot long banner that proclaimed, “9-11 World Trade Center Controlled Demolition.” This banner became not only an object of cheers, but also a magnet for danger.

To those who wanted to keep concealing the truth about 9-11, an undercurrent of visceral tension reached a boiling point. One provocateur who incessantly tried to incite a riot among the crowd told Ms. Guliani and this writer: “If you stay here, bad things are going to happen. If you don’t take down that banner, I’ll get some of my steelworker and biker buddies to bash your heads in.”

Backed up against a wall and surrounded by thousands of supporters and enemies, people screamed in our faces for four hours.

One group threatened, “We’re going to beat your brains in,” while others accused us of being “scumbags” and “communists” who should leave America. Others got even more physical, shredding Kujawa’s placard as he handed out fliers and DVDs.

Hostilities reached eruption level when a bicyclist raced toward our banner. Ranting and raving maniacally while hurling insults, this man rode his bike through our banner before hopping off his cycle and ripping it to shreds. 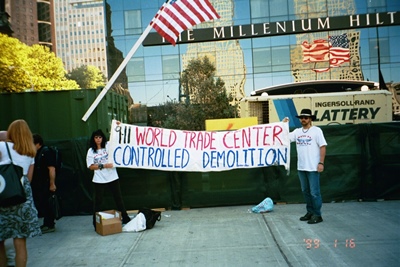 Sammartino, author of a seminal article entitled “The 9-11 Passenger List Oddity,” was in attendance at Ground Zero on the fourth anniversary of 9-11.

Recently, he joined AFP to discuss that day.

“Victor Thorn and Lisa Guliani led us into the belly of the beast that day,” he said. “Not many people can make that claim. It was one of the most exciting days of my life. But by being at Ground Zero, we could have easily been beaten up or gone to jail. The government didn’t think what we did was going to happen. Otherwise they would have had some policemen scoop us up beforehand.”

Sammartino added: “Being at Ground Zero and exposing the truth to tens of thousands of people was exhilarating. It really felt like we were doing something for the good of our country. More than half those gathered that day were genuinely interested in what we had to say. As a 9-11 truth seeker, I finally felt like I wasn’t alone. Maybe best of all, a few firemen and police officers flashed us the thumbs-up sign for our efforts. One firefighter told me, ‘We can’t talk about anything, but we know exactly what happened that day. If we speak out, we’ve been told that our pensions will be taken away.’”

William Rodriguez, a bona fide 9-11 hero who is recognized as the “Last Man out of the Towers,” told WING TV on September 11, 2005: “I don’t care what kind of things happen to me. My apartment has been broken into, and I’ve had my computer hard drive and camera stolen. It doesn’t matter. I lost 200 firefighter friends on 9-11, and nothing will stop me from speaking the truth.”