Getting free speech rights would be really easy these days if we donned black masks and helmets, threw on some all-black military fatigues, grabbed a few bags of dog poo and a truncheon, and showed up to harass anyone showing pride in America or our U.S. culture heroes. Who knows? You might even be able to slam seven people in the head with a metal bike lock and get away with it, as did college professor and anti-free speech activist Eric Clanton.

Fortunately, however, we here at the FREE EXPRESSION FOUNDATION (FEF) believe in the rule of law, and we believe in free speech for everyone, whether you are a red leftist or an ultraconservative red, white, and blue patriot.

But, we are sad to say, that is not the way those in charge think in America today.

You know that’s true, because, every once in a while, you turn on the TV and sit through a FINK broadcast—the “Fake Industrial News Komplex.” You may have also realized that never before in American history has the news been so blatantly fictional. Every mass shooter is a “white supremacist” (even if he or she is for universal healthcare, saving gay whales, stopping “apocalyptic” climate change or inspired by communist Rep. Alexandria Ocasio-Cortez). For instance, the “fascist” shooter in the recent El Paso massacre described himself as a progressive leftist!

In his “manifesto,” he warned that, “[T]he media will probably call me a white supremacist anyway and blame Trump’s rhetoric.” He then stated, “The media is infamous for fake news. Their reaction to this attack will likely just confirm that.”

But who cares about the truth? And who cares about open and stimulating political debate? Certainly not the Democrats, who have adopted the bogus narrative that white people in general and conservative white males in particular are the worst plague to have infected mankind since the first flea jumped off the first rat and bit a human, passing on the Yersinia pestis bacterium thus kicking off the Black Death. Leftists today are only concerned about acquiring complete political power, and they will support any lie to regain the White House.

And, really, the Republicans are hardly better, scratching and clawing over one another to claim their spot on the censorship bandwagon. We can’t count on them to protect free speech and to defend those whose First Amendment rights are being fed through the shredder.

We’ll have to do this ourselves—average Americans and the FREE EXPRESSION FOUNDATION. Right now it is conservatives who are bearing the brunt of the assault on free speech. But tomorrow it could be the left. We don’t really make an ideological distinction about whose rights we support, as long as those battling for free speech do not espouse violence. We will support them all. Right now, however, it is conservatives who need our help the most.

For those who wonder if a fledgling organization can make a difference, ask those defendants who were set free in California after an attorney representing FEF played a major role in swaying a judge to rule that the Anti-Riot Act is unconstitutional. This was a huge victory, and we expect many more. But we need funds.

Want to join us? Send a check or money order made out to FEF and mail it to P.O. Box 1479, Upper Marlboro, MD 20773 today. Or donate online here, at the FreeExpressionFoundation.org website.

Does Assange’s Arrest Mean He’ll Face Charges in the U.S? 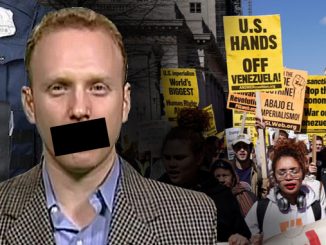