• Insider tells how bribery is common practice in drug approvals.

The former managing director of drug giant Eli Lilly and Company in Sweden continues to blow the whistle on the business practices of the pharmaceutical industry, scoring a major victory in announcing that his first book, Side Effects: Death. Confessions of a Pharma-Insider, will be turned into a full-length feature film.

John Virapen, who began his career with “Big Pharma” in 1968 as a salesman knocking on doctors’ doors, rose through the ranks to realize what he was pitching were not drugs, but death. Virapen was well aware early on that thousands had died or committed suicide by taking the drugs he was pushing. “I indirectly contributed to the death of . . . people, whose shadows now haunt me,” he explained in his book.

Spending nearly 30 years pushing Big Pharma’s wares onto doctors, who would then push them onto an unsuspecting, trusting public, Virapen made millions dealing drugs, crisscrossing the globe in the hopes of convincing healthcare professionals to use his company’s products, even when he knew they were unsafe.

Seeing his latest son born in 2004 was an epiphany for him, and he decided to come out of the shadows to make sure no one else died at the hands of pharmaceuticals. Virapen is now 71 years old.

Virapen played a key role in getting approval for the drug Prozac (fluoxetine) in Sweden, a country that other nations look to as the leader in drug approvals. Virapen resides there now.

“Sweden was the frontrunner when it came to registration of drugs,” he explained to this reporter during an August 14 interview. “Even the FDA used to go to them and ask questions.”

Prozac, used to treat clinical depression and prescribed to more than 54 million people worldwide, is mind-altering and responsible, many feel, for the rash of school shootings afflicting America primarily, but other countries as well. 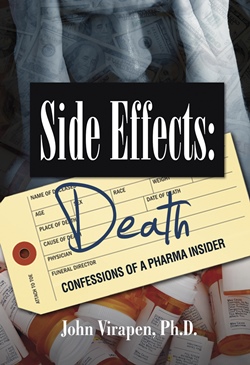 Side Effects: Death is the true story of corruption, bribery and fraud written by Dr. John Virapen, who has been called THE Big Pharma Insider. During his 35 years in the pharmaceutical industry internationally (most notably as general manager of Eli Lilly and Company in Sweden), Virapen was responsible for the marketing of several drugs, all of them with side effects.

Now, Virapen is coming clean and telling all of the little secrets you were never intended to know!

AMERICAN FREE PRESS asked Virapen to explain how he helped get Prozac into the hands of millions.

“My boss told me, ‘Do what you have to do’ to get the drug approved,” he said.

Finding the man responsible for the approval, and researching his background for clues on how to best approach him, they met at an Indian restaurant to discuss Virapen’s proposal.

“He was laughing,” Virapen told this reporter, “and I asked him, ‘What are you laughing at?’”

Around a month later, Virapen’s target received a $25,000 check from Lilly, a bribe, plus a promise to do a 10-year study on the drug, “which meant millions for him,” Virapen explained.

“I had performed a criminal act,” he wrote in his book. “I was forced to use bribery to influence drug approval, even though I knew the drug would harm people.”

This practice is part of the daily routine in the pharmaceutical industry, Virapen said.

“All the companies were the same,” said Virapen. “I did a lot of bribery. I’m an expert.”

“We’d send doctors and their wives away on vacation somewhere,” he continued. “Or we’d give them a new refrigerator. In America, I think they’d get swimming pools. Psychiatrists, they’d get a Picasso.”

Over the course of nearly three decades of working in the pharmaceutical business, Virapen said he only came across one person he couldn’t bribe.

“The pharmaceutical industry’s lobby is extremely powerful,” he wrote in his book. “It constantly lobbies politicians and the judiciary and even blackmails governments by threatening to withdraw investments or to close down sites, thus, creating unemployment in a country.”

AFP asked what he hoped to gain from exposing the corruption.

“I want to see chemical medicine taken out of the equation,” he said.