• James Tracy files lawsuit against university that fired him, union that failed to defend him.

Dr. James F. Tracy, one of this nation’s top media analysts, gained national notoriety for daring to publicly question the mainstream media and government view of the Sandy Hook Elementary School event. He recently filed a wrongful termination lawsuit against Florida Atlantic University’s (FAU) board of trustees, several board members and university administrators, and the Florida Education Association and United Faculty of Florida, two unions. Tracy alleges that FAU violated his rights to due process, free speech, and academic freedom when they fired him earlier this year.

The 49-page lawsuit reveals in great detail how Tracy was harassed, harangued, hated, and even hunted for having unconventional opinions on several alleged mass shootings. In other words, Tracy espoused views different from those offered by the mainstream-media/government complex, whose insistence on condemning all differing views has rapidly spread to the world of academia, which is supposed to be a place where students are encouraged to open their minds to all possibilities. The lawsuit asks that Tracy be reinstated to his tenured employment at FAU, with full restoration of all benefits and lost wages, compensatory and punitive damages, and costs and disbursements for the lawsuit including attorneys’ fees.

Tracy, a father of four, taught “courses examining the relationship between commercial and alternative news media and socio-political issues and events” at FAU’s School of Communication and Multimedia Studies. He was fired from his lifetime-tenured position on January 6 of this year.

Tracy explained in an interview with this writer several years ago, when the heat first began to be applied to him, why the course he taught was so vital to, in this writer’s opinion, the survival of a free and prosperous country.

“I wouldn’t be involved in studying the media and commenting on it and critiquing it, if I were not able to talk about the political element of it, because all media, especially news media, are political by their very nature,” he explained.

Tracy’s saga began soon after the December 14, 2012 school shooting, where it is alleged by the mainstream media and the government that 20 children and six adults were gunned down by Adam Lanza, who allegedly murdered his mother then took his own life. Perhaps as no other event has done before, Sandy Hook, as it is informally referred to, caught the attention of thousands of people across the globe who “smelled a rat” and were not buying the conspiracy theory the mainstream media/government complex was cramming down everyone’s throats. To this day, the events surrounding the incident are hotly contested. This newspaper had a vital part in advancing alternative views of how Sandy Hook unfolded when this writer interviewed Wolfgang W. Halbig, who has done more than anyone else to get answers from state and local authorities. 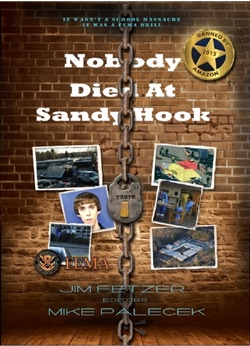 Incredibly, just three weeks after the Sandy Hook event, the mainstream media began their attack on Tracy, who was using his own website, the “Memory Hole” blog, to offer his own views on what happened on December 14, views apparently considered dangerous and not acceptable to the mainstream-media-government complex.

“In early January 2013, three weeks after Tracy’s coverage of the Newtown incident, the Tribune Company, a national media company of newspaper, television, and radio companies, by and through its locally owned newspapers in Palm Beach County, including the Sun Sentinel, began publishing opinion columns publicly demonizing, disparaging, and defaming Tracy and openly inviting the university to terminate Tracy’s employment,” states the lawsuit.

Following the media carpet-bombing of Tracy, the coast was clear for his employer to begin its attack, as the lawsuit documents.

The suit alleges: “After the initial media onslaught against Tracy, senior administrative officials at FAU began searching for ways and means to discipline and terminate Tracy. On or about March 28, 2013, the defendant university . . . issued Professor Tracy a ‘Notice of Discipline’ with the threat of further punishment for referencing or writing about Florida Atlantic University on his personal blog.”

FAU administrators then tried to intimidate Tracy by insisting he fill out an “outside activities” form, which the unions advised Tracy he did not have to complete.

Tracy’s lawsuit further alleges: “On July 23, 2013, the defendant university and FAU defendants, by and through defendant Coltman, denied Professor Tracy’s grievance. She wrote: ‘Dr. Tracy has the same rights as any private citizen to write up his opinions and post them on the web. The university has [the] right to require [Professor Tracy] to clearly indicate that his opinions are not the university’s positions.’ The denial, however, made no mention of Professor Tracy’s ‘outside activities’ forms or his failure to submit them for his personal blogging or constitutionally protected speech.”

“The suit appears to be entirely justified and should serve as a warning to other institutions of the importance of adhering to their own avowed policies of academic freedom and the significance of tenure, which were clearly violated in this case,” he said.