• “Attorney for the Damned,” who represented some of the most controversial figures in America, dies in prison custody.

GOVERNMENT MURDERS EDGAR STEELE – CAN THEY GET AWAY WITH IT?

Today, September 4, 2014, early afternoon, a California mortuary notified Mrs. Cyndi Steele that her husband Edgar was dead. Since that time, specific circumstances regarding Mr. Steele’s death are being confirmed. This web site and the Edgar Steele Defense Fund (ESDF) will release more information as it becomes available.

Mrs. Steele contacted the ESDF Board, saying she was utterly devastated by this information, and is furious that no Victorville representative contacted her in the last few days regarding his failing health and did not even call her regarding the death of her husband. It was cruel to allow the mortuary to make the call. 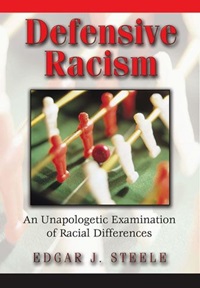 Get Edgar Steele’s magnum opus, DEFENSIVE RACISM: An Unapologetic Examination of Racial Differences, and find out why the government was out to get him.

Based on the best knowledge at hand, the following are the most likely causes of death: overmedication, persistently delayed, insufficient or improper medical treatment, medical neglect. The federal government and Victorville Penitentiary bear responsibility for the lives of the inmates who reside there and have refused to be accountable for the decline in Edgar Steele’s health.

Some hours before Mrs. Steele was contacted by the mortuary, ESDF President Robert Magnuson received an email corroborating Ms. Steele’s concern for her husband’s health and safety, validating the suspicion Mr. Steele’s health had been in a sharp decline for the past month. This fact was obscured, if not hidden by the federal government.

First, Mr. Steele was the victim of a false prosecution, then he was imprisoned in the most dangerous prison here in America. Then his wife was never allowed to visit him despite a court order allowing visitation. Then, his health was compromised because of neglect, and finally, the reports came in that he had been drugged out of his mind earlier this week, which was the final blow that killed him. Call it anything else you like, but it is murder.

The facts of this tragic situation will be disclosed as the information is gathered.

Steele, who was a target of the Anti-Defamation League and the Southern Poverty Law Center, has proclaimed his innocence to this newspaper over several occasions through audio interviews conducting from prison. This reporter interviewed Mr. Steele in June, 2011, his first interview since his arrest, which can be heard below. Additional audio interviews will be made available through this website when they are processed.