STAFFORD, Virginia—While South Carolina Governor Nimrata Nikki Randhawa Haley and a bevy of vote-hungry white politicians may have rolled over to the forces of political correctness and agreed that the Confederate battle flag should come down across the nation, not all Southerners are ready to give up the fight for this important symbol of white Christian America. On Sunday, July 12, about 100 enthusiastic citizens—white and black alike—showed up in front of the Stafford County, Virginia courthouse at a Confederate flag rally, filling the grounds with a sea of red and blue flags with the St. Andrew’s Cross, proving that there are people willing to resist federal tyranny and thought control. (Ironically, the courthouse sits on Jefferson Davis Highway, one of the roads slated for a name change by radical anti-Southern activists.)

Above, a spirited rally in support of the Confederate flag and Southern heritage in Virginia. Activists displayed not only rebel flags, but also the yellow Gadsden “Don’t tread on me” flag.

“We can’t let them take our history from us,” said Jason Sulser of Stafford, the organizer of the event. “It’s other people who are putting the hate into this flag. We are not haters. We don’t loot, and we don’t riot. The government wants to take our guns. They want to take our Bibles. And now they want to take our flag and our heritage.”

Sulser continued: “We understand that some people have adopted this flag as a symbol of hate. But those kinds of people are not welcome here. We are gathering because we can’t stand by as mute witnesses as war is waged on our traditional American culture. What’s next—Old Glory?”

Sulser likened the politically correct forces behind the effort to ban the Confederate flag to ISIS, the radical Muslim army raging across portions of Syria and Iraq:

“The first thing these ISIS people do is destroy the cultural symbols of the people they subjugate,” he said. “That’s how they do it. This cultural purge is a form of genocide. Here in America, we can’t let the ruling party dictate what we can and can’t say or believe. We cannot bow to tyranny. And that’s what this flag is: a symbol of resistance to tyranny.” 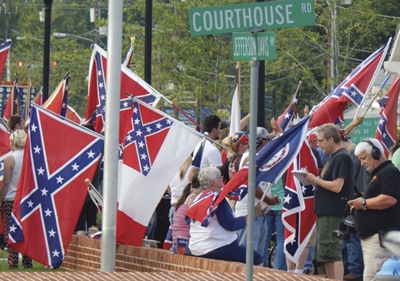 Nearly 100 people showed up to show support for the Confederate flag at a rally in Stafford, Va. recently. Also present were counter-protesters, intent on voicing their belief that the battle flag and the “Stars and Bars” of the Old South are symbols of racism. The pro-flag marchers are intent on countering these “culture erasers.” Below, two Southern gentlemen display the battle flag and the Confederacy’s third national flag. (Photos by Paul T. Angel) 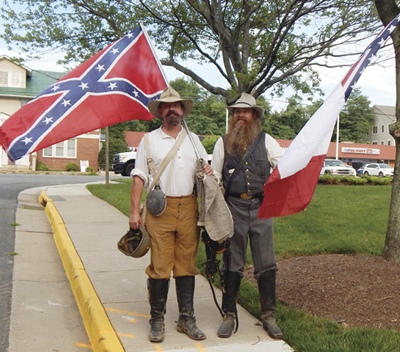 He continued: “The majority of the people who support the display of the Confederate flag are Christians. We basically live in an atheistic society where the South remains one of the few bastions of devout faith. There are young people, old people, fathers, mothers, grandparents, black and white here today flying this flag. We are a truly diverse group, and we have more rallies planned to let people know not all Americans are ready to abandon this important symbol.”

Dennis Durham of the Maryland-Virginia Chapter of the League of the South (LS), declared a “hate group” by the likes of the Southern Poverty Law Center (SPLC), was also at the rally.

“The SPLC is a professional hate-for-profit group,” he told this writer. “They are in the business of creating hate. They’d be out of business if so-called ‘hate’ disappeared. But look around you. Do you see any haters here?” he asked.

“We are in the midst of a ‘Third Reconstruction,’” he added. “The first was after the war, when the Union brutally occupied the South. The second was during the era of desegregation, when our right to choose with whom we associated was denied by federal troops. Now they want a Third Reconstruction. They want Southern culture wiped out. This is just the start. I believe they want to ‘culturally cleanse’ the South, and we can’t just sit by and watch it happen.”

Durham handed out copies of The Free Magnolia, a newspaper containing a selection of insightful articles explaining the importance of resisting the socialization, atheization and liberalization of America.

Sulser and Durham both have events planned for the future, and we’ll keep you informed.

Paul T. Angel is the managing editor of THE BARNES REVIEW historical magazine and the art and production director for AMERICAN FREE PRESS. He received his BA in Design from American University in 1983 with a focus on graphic design, art history and marketing. Paul invites you to request a free sample copy of TBR—the most honest history magazine in America—by calling 1-877-773-9077 toll free or writing TBR, P.O. Box 15877, Washington, D.C. 20003.