There aren’t too many scholars who have been on the inside of the highest halls of power and have the keen intellect to be able to dissect and explain the political and economic situation as it exists today. Dr. Paul Craig Roberts is one of those individuals.

Dr. Roberts served under President Reagan as the Assistant Secretary of Treasury for Economic Policy, as the Associate Editor of The Wall Street Journal, a columnist for BusinessWeek, and Scripps Howard News Service, and holds many university appointments.

Dave Gahary had a chance to sit down with Dr. Roberts to discuss his accomplishments in the Reagan administration, the purposeful destruction of the United States economy, the evisceration of the U.S. Constiution, and the coming collapse, in this important interview (28:02). 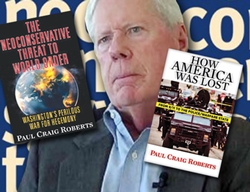 How AMERICA Was LOST: From 9/11 to the Police/Warfare State

The FAILURE of LAISSEZ FAIRE CAPITALISM

There aren’t too many scholars who have been on the inside of the highest halls of power and have the keen intellect to be able to dissect and explain the political and economic situation as it exists today. Dr. Paul Craig Roberts is one of those individuals.

Dr. Roberts served under President Reagan as the Assistant Secretary of Treasury for Economic Policy, as the Associate Editor of The Wall Street Journal, a columnist for BusinessWeek, and Scripps Howard News Service, and holds many university appointments.

AMERICAN FREE PRESS had a chance to sit down with Dr. Roberts on February 2 for a 45-minute interview.

AFP asked what his duties were under President Reagan.

“I was the front man in the President’s government—to get his economic plan out of the Treasury, out of Council of Economic Advisors and out of the Office of Management and Budget [OMB], and also out of the Chief of Staff of the White House, so that the Congress could vote on it,” he explained.

It cannot be stressed enough the significant impact Dr. Roberts had and continues to have on economic policy in the United States, and the world.

He had to play politics and go up against those not willing to support Reagan’s economic plan, like James A. Baker III, White House Chief of Staff, David Stockman, Director of OMB, Paul Volcker’s Federal Reserve, Wall Street, as well as the Central Intelligence Agency (CIA).

“I succeeded and got to the program out of the administration and into the Congress where it passed,” he said.

This was how, as Dr. Roberts explained, “supply-side economics became the policy instead of the post-World War II Keynesian demand management.”

“The CIA and the military/security complex didn’t want to end the Cold War; it was a profitable business,” he said.

“In fact,” explained Dr. Roberts, “the CIA told Reagan that if he started an arms race, the Soviets would win.”

President Reagan, however, didn’t believe what the spy agency was telling him.

“He formed a secret committee, to which he appointed me, to investigate the basis for the CIA’s claim,” he said.

The committee had subpoena power over the CIA’s relevant documents, which made their decision easy.

“The committee concluded that it was basically the CIA protecting its turf,” Dr. Roberts explained.

The committee’s findings are what precipitated Reagan’s historic meeting with Mikhail Gorbachev “and brought this Cold War with its threat of nuclear Armageddon to an end,” Dr. Roberts explained.

Dr. Roberts continued: “Until Clinton came along, we had very good relations with the Russians. It was Clinton who started breaking all the agreements.”

“The Russians had been promised that NATO would not move one inch to the east,” he explained. “Now it’s on their borders.”

Clinton wasn’t the only president to unravel what The Gipper assembled almost 30 years ago.

“George W. Bush pulled out of the ABM [Anti-Ballistic Missile] Treaty, [and] his administration rewrote our nuclear doctrine, and took nuclear weapons from a retaliatory role to a preemptive first strike,” Dr. Roberts explained.

Although he helped craft a new economic paradigm for this nation, he admits that model cannot help us now, and also explained how we got to where we are today, as he does in his classic book, The Failure of Laissez-faire Capitalism and Economic Dilution of the West.

“Our problems today are twofold,” he said. “One is we have offshored millions of middle-class jobs. This began with the manufacturing. And of course it destroyed the unions, but it also destroyed consumer purchasing power.”

“The kind of high-productivity, high-value added jobs in manufacturing that created a middle class for people without a college education and which led to rising consumer incomes and rising living standards,” he explained, “has been given away to China, and it’s hurt the tax base of cities and states.”

He continued: “And then the corporations found out they could also offshore professional skill jobs that the university-educated kids would move into, like software engineering, information technology, research, design, any kind of engineering that you don’t have to be actually on-the-job, present. This sort of got rid of the backbone of the American consumer economy, and the income that drove the consumer economy just ceased to be there. Alan Greenspan and the Federal Reserve filled in for the missing growth and real income by expanding credit and got everybody indebted up to their eyeballs. And that’s how they kept the economy going in the early part of this century.”

Dr. Roberts explained the other reason why the U.S economy is in tatters.

“The other problem is that the economy has been financialized with these huge financial institutions focused on essentially extracting the entire economic surplus into interest payments to themselves,” he explained.

“They don’t really finance productive activities, like factories and new businesses,” he explained. “They’re basically extracting everything they can into interest payments to serve debt that they issue. And they’re so powerful now, and they’re too big to fail, and also they’re too big to jail.”

AFP asked what can be done to reverse these disasters.

“Probably we can’t do much of anything and it’s gonna lead to a collapse,” he said.

Dr. Roberts then touched on the assault on our God-given rights.

“All of the protections in the Bill of Rights have been set aside,” he lamented. “We now have indefinite detention without presenting any evidence or going before a court. This is what medieval robber barons did, is pick people up, and threw them in the dungeon. We have the president also claiming the power to assassinate American citizens without due process of law, that is they murder on the basis of presumption or assumption; no evidence. The Executive Branch has violated all of the U.S. statutory laws and international laws against torture, and no one has been held accountable. They have also violated all the laws against spying without warrants, and no one’s been held accountable. What this means is that there’s no rule of law. The whole purpose of the rule of law is that it makes law a shield that protects the people from arbitrary government action. If you don’t have rule of law, then you have law not as a shield for the people but law as a weapon in the hands of the state.”

“This is what my book, How America Was Lost: From 9/11 to the Police/Warfare State, is about,” he said. “It’s showing the progression from a free nation into a tyranny.”

Dr. Roberts explained the premise of his other book, The Neoconservative Threat to World Order: Washington’s Perilous War for Hegemony.

“This threat is a threat of nuclear war,” he said. “When the Soviet Union collapsed, the neoconservatives said, ‘hey, look, history has chosen America. They didn’t choose the proletariat, they chose what they called democratic capitalism. It’s neither democratic or capitalist, but that’s what they call it. And, it’s chosen us to rule the world and to impose our system on everybody else, and this puts us above all law. Law is what we say. It also puts us above the sovereignty of other countries. And this is where the ‘imperial American’ of the 21st century came from. This is the justification for invading countries on false pretenses, slaughtering huge numbers of people, producing huge numbers of refugees and displaced people. We’ve done this now to at least seven countries. It is this notion that we cannot accept any constraint on our will which has thrown us into conflict with China and Russia.”

“China and Russia are not Iraq and Libya,” he said. “These are powerful countries, they have powerful militaries, powerful nuclear forces. Trying to force your hegemony by destabilizing these kinds of countries, this is so reckless as to be unbelievable. But that is the foreign policy of the United States. It leads directly to nuclear confrontation, and of course, nobody wins.”

Dr. Roberts addressed the recent news that trillions of dollars in new nuclear weapons will be purchased by U.S. taxpayers.

“We don’t have any money to pay Medicare or Social Security, and they’ve got this arms race going again.”

“It’s the most serious situation in my lifetime,” he said. “The Cold War was never as dangerous as what has been created now.”