Sussex County, Delaware Sheriff Jeffrey S. Christopher has been thrust into an unenviable position. He’s being forced to defend, to the death, the oath he swore to the United States Constitution, against a political and ideological machine intent on stripping his sheriff’s office of any meaningful duties.

Sheriff Christopher filed a lawsuit against this Constitutional and common law encroachment, and on March 8 the case was heard before a county judge, who ruled on March 19.

Prior to the ruling, in order to gain a fuller understanding of the case, on March 15 AMERICAN FREE PRESS conducted an exclusive interview (46:45) with Sheriff Christopher, who was born and raised in Maryland into a police/military family.

•Delaware the tip of the spear

A national and state effort is underway to diminish and then destroy the office of the sheriff across the country. AMERICAN FREE PRESS contributing editor Pat Shannan has consistently covered this topic over the years, most recently writing about statutory gun-control laws that have been signed into law or are being formulated in the wake of the Sandy Hook shooting last December.

One sheriff-related matter Shannan covered almost exactly one year ago is the case of Sussex County, Delaware Sheriff Jeffrey S. Christopher, who’s the target of a political campaign to eviscerate the office of sheriff in that county. Christopher told Shannan “that the two administrations prior to his—as far back as 2000—began to notice a reduction in funding and the chipping away of powers of the office in general.”

“Now my deputies and I have been relieved of all arrest powers and can’t even make a traffic stop,” he said. “Delaware has only three counties. . . The other two sheriffs . . . will not stand up with me” to prevent the elimination of county law enforcement, he said. Delaware’s first sheriff took office in 1669.

A few months after Shannan wrote about this matter, Delaware’s governor signed into law House Bill 325, which curtails the power of the sheriff even further, removing the term “conservator of the peace” from the legal language used to define the office of sheriff. Almost immediately, Sheriff Christopher filed suit.

Christopher had his day in court on March 8, arguing that “the Delaware Constitution describes the sheriff as a ‘conservator of the peace’ and should have police powers, as an official elected by the people.” Judge T. Henley Graves, who said “he would be making his ruling based on the laws in Delaware…is expected to make his ruling within the next several months.”

Sheriff Christopher is taking this challenge to his office very seriously.

“We think that it may have to go to the United States Supreme Court before we can finish. As long as God gives me the avenue to do this and challenge this, I’m gonna continue to do it.”

“Nowhere in the history of America has any legislative body ever declared the sheriff with no arrest powers or no law enforcement capabilities whatsoever.”

“This case in Delaware is a precedential case. If there’s a way that these badgers in Delaware find to diminish the sheriff or get rid of the sheriff, it’s coming to a state near you. I guarantee you.”

•Push to rob sheriffs of arrest power has national implications

Sussex County, Delaware Sheriff Jeffrey S. Christopher has been thrust into an unenviable position. He’s being forced to defend, to the death, the oath he swore to the United States Constitution, against a political and ideological machine intent on stripping his sheriff’s office of any meaningful duties. Sheriff Christopher filed a lawsuit against this Constitutional and common law encroachment, and on March 8 the case was heard before a county judge.

On March 19 a county judge ruled against Christopher and in favor of the state of Delaware’s plan to neuter the office of the sheriff.

Prior to the ruling, in order to gain a fuller understanding of the case, on March 15 AMERICAN FREE PRESS conducted an exclusive interview with Sheriff Christopher, who was born and raised in Maryland into a police/military family.

“I learned very quickly about honor, the Constitution and the Founding Fathers,” he said.

“I grew up to be a police officer,” he said, “and I came to know after 26 years on the force in Maryland that there was a decay…and a diminishing of the value of the police system the way it used to be, one-on-one community policing, getting in touch with the people and getting your finger on the pulse on what the people need and want. I saw that there was a… misinterpretation of the role of the sheriff here. And trying to look into it I learned that there was a government change in the role of the sheriff.”

AFP asked if there were arrest powers in Delaware prior to the latest assault on the sheriff’s office.

According to an Internet post on the Delaware Democratic Party website, “House Bill 325 was prompted by concerns surrounding the Sussex County sheriff’s office, which has conducted traffic stops and made arrests, despite multiple opinions from the Attorney General’s Office and being prohibited under state law from acting as a police officer. The Sussex sheriff contends that a line in the Delaware constitution that says that sheriffs are ‘conservators of the peace’ gives him that authority.” The Attorney General of Delaware is the older son of U.S. Vice President Joe Biden, Joseph Robinette “Beau” Biden III.

House Majority Leader Representative Peter C. Schwartzkopf (D-Rehoboth Beach) stated, “We have one sheriff who thinks he is above the law, and that is why we need to do this. The other two sheriffs understand what their authority is.”

Sheriff Christopher, who makes “about $20,000 a year,” explained the erosion of the responsibilities of the sheriff.

“I think what happened, for whatever reason, the counties began to give the state more and more say so in the policing field…because the state had more resources,” he said.

Due to the huge population explosion in Sussex County specifically over the last 10 years, Sussex County has contracted with the Delaware State Police to provide services.

Sheriff Christopher, who works closely with Sheriff Richard I. Mack, the founder of the Constitutional Sheriffs and Peace Officers Association, believes this case has national implications. 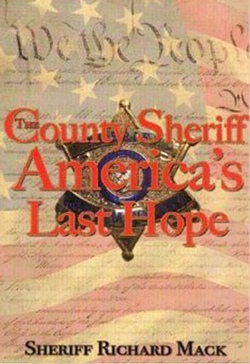 “As I’ve gone along, I have to admit, that I’ve found out more and more and more…and talked to people like Joe Arpaio and Sheriff Mack, and probably another hundred, hundred and twenty, hundred thirty sheriffs across this country, have told me about their plight and what they’re dealing with, with regard to the federal government and some of their own state governments as well.”

“Why would Delaware want to take away the office of sheriff,” he said, “unless it’s designed to try and line up with the federal government, and take away the sovereignty of the sheriff and the ability of the county? If there’s any power play right now, look to Delaware, because Delaware is the most progressive, and the state of Maryland as well, which is neighboring, they’re the most progressive, liberal stance and agenda.”

“One of the reasons, I think the attack is coming down, upon sheriffs across the country, is to erase the role of the sheriff so that encroachments can have a free path…and eventually take away more rights and liberties.”

AFP asked if the other sheriffs in Delaware’s two other counties were standing behind him.

“No. I put my left hand on the Bible and I raised my right hand, and I swore before God my creator, to make sure, that I kept the oath of office, understood it, number one. If anyone doesn’t understand it they shouldn’t be running for the office of sheriff, which is an office of the people. And if they’re not gonna do the full and complete duty to defend the Constitution, to uphold the Constitution, which to me says every portion of it, they’re responsible for it. If those duties are diminished or abrogated, or negated in some way, by some fiat or governmental takeover, to me it’s not a legitimate takeover. The only way that they’re gonna get rid of the sheriff and the power of people in the office of sheriff, is to basically amend the Constitution in the state of Delaware. And there’s no doubt in my mind that there will be some future attempt to do that if the people in Delaware don’t stand up, and of course I should say, all over the United States, because the attack on the sheriff is not just here.”

AFP asked if he’s been made to feel uncomfortable doing your job.

“Yes, I’ve been assaulted, I’ve been berated, I’ve been cursed at, I’ve been told that basically I have no future as a sheriff here, they’re gonna see to it. I had one county councilman who still threatens me to this day.”

AFP asked if he was actually assaulted.

“Yes I was, I was assaulted by one of the county councilman.”

AFP asked what happened after that?

“Nothing,” he said. “The attorney general refused to prosecute this guy because he’s in with Flynn. He’s one of the good ol’ boys.”

He continued. “People ask if I fear retribution from these people…by making these statements. Brother, I serve a bigger God than all of these guys, and what they have to threaten me with doesn’t really scare me at all.”

Sheriff Christopher explained that he’s prepared for this matter to get ugly.

“I’m trying to do this in a peaceable sense so that we don’t have to resort to violence. I hope we never ever have to have a revolution, but I fear that if the government itself gives us no choice, that we may have to respond in that way. And to that I say, God help us.”

AFP asked if he’s not going to give up.

“I am not. As long as God gives me the avenue to do this and challenge this, I’m gonna continue to do it.”