President Trump and the U.S. public have been thoroughly brainwashed on Persia.

President Donald Trump wants to get out of the Middle East, so why did he murder Iran’s most popular leader, Gen. Qassem Soleimani? And why has the mainstream media, including its rabidly anti-Trump liberal segment, cheered for war and demonized Iran?

Trump, like everyone else, is a product of his environment. Trump’s mentor was Roy Cohn, the notorious pedophile and Kosher Nostra operative who ran New York for Meyer Lansky, then head of all organized crime in the Western Hemisphere.

Trump made a career in dicey real estate investments, gambling joints, and hotels. The whiff of money laundering followed Trump throughout his bankruptcy-haunted business career, which was mainly conducted in the New York milieu dominated by organized crime. It’s no accident that Trump’s daughter Ivanka married Jared Kushner, whose mobbed-up father did time in federal prison. Kushner and Ivanka, who has been alleged to be a Mossad operative, are fanatical Zionists and close associates of such crooks as Benjamin Netanyahu and Henry Kissinger.

Whether or not the Kushners are officially on the Mossad’s payroll, they are de facto Israeli assets. And they have been brainwashing Trump to hate Iran and love the genocidal and illegitimate so-called state of “Israel” for many years. Thanks to Jared and Ivanka, Trump hired the lunatic Israel-firsters John Bolton and Mike Pompeo, both of whom have staked their careers on starting a U.S. war on Iran for Israel. Even after firing Bolton, Trump apparently still believes the nonsense about Iran he hears from the demented arch-Zionist Pompeo.

While Israeli agents whisper into the president’s ear, thousands of other Israeli agents whisper into the millions of ears of the American people. The American mainstream media are dominated by Jewish Americans who hold various degrees of loyalty to Israel. This is not an “anti-Semitic conspiracy theory”; it is the simple truth. Listen to courageous Jewish whistleblower and ex-MSM journalist Philip Weiss:

“Do Jews dominate the media? This is something I know about personally. I’ve worked in print journalism for more than 30 years. I’ve worked for many magazines and newspapers, and for a time my whole social circle was editors and writers in New York . . . [I]n my experience, Jews have made up the majority of the important positions in the publications I worked for, a majority of the writers I’ve known at these places, and the majority of the owners who have paid me.”

Are the Jews who dominate American media loyal to Israel? Weiss answers, yes: “As former CNN correspondent Linda Scherzer has said, ‘We, as Jews, must understand that we come with a certain bias. . . . We believe in the Israeli narrative of history.’ ”

The Jewish-dominated “American” mainstream media cranks out made-in-Israel lies about Iran. Our Israel-run media tells us that Soleimani was a terrorist, when in reality he was the

organizational and strategic genius who defeated ISIS. As Trump repeatedly said, Obama and Hillary created ISIS. In other words, the Zionist-run USA is the terrorist, and Soleimani was the anti-terrorist.

The Zionist mainstream media tells us Soleimani was in Baghdad plotting to kill Americans. In reality, throughout his career, Soleimani worked with Americans, sometimes fighting shoulder-to-shoulder with them, as in the fight against ISIS, when the U.S. supported both sides, and Soleimani fought beside those Americans who were helping Iraqis defeat ISIS. Soleimani always tried to maintain cordial relations with the U.S. He spent the past 15 years keeping a lid on the anti-U.S. insurgency in Iraq so that Iraq could become democratic and free itself from occupation peacefully.

The mainstream media refuses to report the statement of Iraqi Prime Minister Abdul Mahdi that the Trump administration lured Soleimani to Baghdad with a promise of peace talks, then ambushed him in cold blood. It refuses to report evidence that Iran’s tragic shootdown of Ukrainian airliner PS752 was filmed by a U.S.-Israeli agent, who must have known in advance when and where it would happen—meaning the shootdown itself was orchestrated by the same Zionist forces who are trying to turn it into a public relations bonanza.

The U.S. is now at war with Iran for one reason: Israel wants this war. Israel hates the pious and principled leaders of the Islamic republic, who refuse to sell out the Palestinian people as the corrupt Arab leaders have done.

Our government and mainstream media have been captured by a hostile foreign power that epitomizes pure, unmitigated evil. 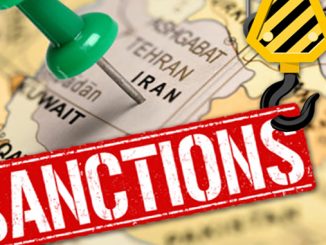 U.S. Should Abandon Sanctions, Help the People Suffering in Iran

Did Iran Take Revenge on CIA Officer and Shoot Down His Plane?