It was only a matter of time before Israel warned Joe Biden that if he resets the Iran nuclear deal it could lead to war. The implied threat came from Israeli Settlements Minister Tzachi Hanegbi, who said if President-elect Joe Biden were to return to the nuclear deal with Iran, known as the Joint Comprehensive Plan of Action (JCPOA), it would lead to a violent confrontation between Israel and Iran. It was clear from the statement that the minister was speaking for Israel Prime Minister Benyamin Netanyahu, who has threatened war with Iran during and before the Donald Trump presidency. He wants to make it known to Biden that were he to be president next January that he had better toe the line taken by President Trump.

The dire warning did not have the support of all Israeli politicians. Zvi Hauser, a leading figure in the Israeli parliament, struck a different tone, suggesting that were Biden to embrace the Iran deal that it would probably end up a better one. That view may not, however, carry the same weight as that of Netanyahu, who has been angling for a war with Iran at every opportunity. What he forgets is that Biden may not be alone in seeking to return to the Iran deal, perhaps with the aim of renegotiating it. That would be a position that would likely be supported by the other signatories to the treaty, namely China, Russia, Britain, Germany, and France.

The problem for Biden is that the Trump administration has punished Iran for four years at the prompting of neocons in Washington and Netanyahu. The result is that the Iranians have lost trust in Washington and may see no benefit in negotiating with Biden. That would suit Israel and could lead indeed to deterioration in the situation in the region.

Somewhat ironically, while Netanyahu and his acolytes have been beating the war drums to scare Biden, one of Britain’s foremost military figures, Chief of the Defense Staff Gen. Sir Nick Carter, has been issuing his own warning about the risks of a war—possibly even World War III. For him, regional conflicts could quickly balloon into a major conflict, drawing in the great powers. He may well have in mind the kind of conflict that Netanyahu is threatening to unleash. Such a clash would engulf the Middle East and quickly spread. He sees the world in this pandemic period as a very dangerous place in which he believes “escalation can lead to miscalculation.”

Biden’s position on the Iran deal is unclear, and some experts feel that he shares some of the Trump principles of staying out of Middle East conflicts. Speaking off-the-record, a former British diplomat who has spent over a decade in the region had this advice: “Biden is dealing with an Iran that no longer trusts Washington. If he thinks he can get them to toe the line, he may find that they see no incentive, and next year Iran will have elections that may well give more extreme elements greater power that encourages the Iranian leadership to ignore Washington. Iran is also drawing closer to China and that is one of the unknown factors in the mix. It is doubtful Netanyahu will want a war with Iran because Israel will have few backers. Biden, for example, is no fan of Netanyahu or the Saudis.”

Israel keeps warning that Iran is close to building a nuclear bomb, but there is no evidence that the Iranians are any closer to what nuclear experts call the “break-out” than they were four years ago. In order to build a bomb, they would need to be running many, many more centrifuges. Those are the machines that spin uranium 238 isotopes until they separate into two components, creating uranium 235, the material used for making atomic bombs. As the machines spin, uranium 238 deposits are pushed aside, leaving uranium 235 in the center of the machines. It is a lengthy process and a massive number of machines are needed.

Meanwhile, Israel also keeps insisting that Iran is building bigger and newer ballistic missiles and cruise missiles, but, once again, this is not a threat that should worry a country like Israel that has a massive nuclear arsenal and some of the most advanced weapons in the world, including America’s advanced F-35 fighters and Patriot anti-missile systems.

In the final analysis, the danger always is that Netanyahu will engage in risky behavior that could draw the United States into a war in the region, fulfilling the prophecy of the British chief of staff that escalation often does lead to miscalculation. 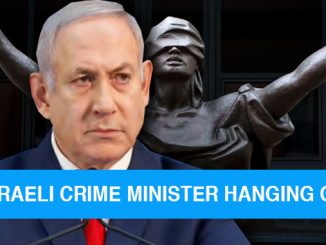 Will Bibi Be Indicted?